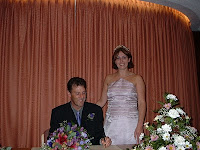 My first wedding was a do for my parents...I borrowed a dress and we had the WRVS do the catering in the church hall, we ate, no disco then a night in a hotel. Hubbies 1st wedding was a massive do in a castle, the full works. But both of us said we never recognised half the guests or really enjoyed it that much.

My sister has also had two weddings, the limo was too long to go round the mini roundabout.

Don't get me wrong I love weddings, as a guest and spent the weekend with friends as they married. It was a lovely simple do, but not cheap.

Hubby and I got engaged in Las Vegas, in the car park of Maceys, he didn't fancy getting married there and then as we still weren't living together. So we sold both houses and three weeks before ours was ready, to move into, we eloped to Chester, just the two of us. On our arrival we were gate crashed by three sets of our dearest friends and afterwards we walked through Chester to an Italian restaurant and asked for a table for eight. They were fully booked, but the customers made way for us. One friend brought a cake.

Then it was time for the honeymoon. I spent the week packing and moving, with Mothers help and hubby went to Isreal 48hrs later, with work.

It has been eight years now of marriage and we keep saying we'll renew our vows and have a big do...but quite frankly, back then, it was all about us and still is now.
Posted by chickenruby at 00:04:00

Email ThisBlogThis!Share to TwitterShare to FacebookShare to Pinterest
Labels: laugh and cry