What can you do with a disabled young adult.

Not living in the UK means we don't have a home to take our disabled daughter to for visits.
When the sun is shining there are plenty of places to go and things to do, but what about when it rains and is cold and wet and windy, like today?
Up until she was 14/15 we could still take her to soft play, we could take her swimming and we could bring her home as she got older. But she's 25 now, a young adult.
We need to take an adult size change bag with us, we have to be within range of public toilets, preferably Mother and baby changing rooms, she needs to sit at table and chair to eat, she can't feed herself a cake and have her own drink without supervision.
We need to be in the dry and warm, she won't wear a hat and gloves.
So where do we go on a day like today?
Supermarkets and indoor shopping centers, that's where.
She loves being around people, she loves pushing the trolley, the noises, occasional music and the flat even surfaces so there are no tripping hazards.
It seems a strange thing to do to visit Sainsburys then Asda then off to Tesco for a day out. But it suits her needs, means we are more relaxed because she's not cold or wet and is happy, but it's our only option really.
Posted by chickenruby at 21:20:00 3 comments:

After the tenants leave. Cleaning the kitchen floor. 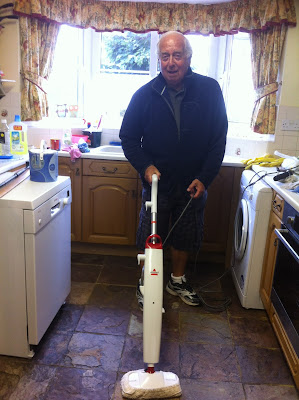 Last year my Dad had a heart attack, prior to that my Dad would've been at my house every day painting, repairing and cleaning, helping get the house back to the condition it was in prior to us moving.

Our tenants left the house in a terrible condition, the dirt alone on the kitchen floor was heart breaking. 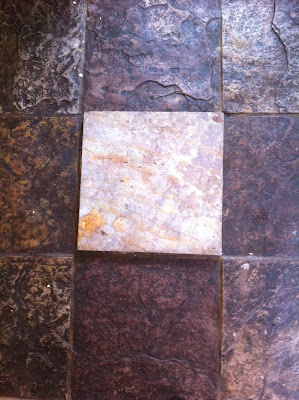 The centre tile has been sitting in the shed for 3 years and is untreated.

My Dad wanted to help, but bending, lifting and carrying cause him pain and discomfort, so he requested I found him 'standing' jobs only. Apart from washing curtain poles and light fittings, there wasn't much he could do, so I set him the task of cleaning the kitchen floor.

Dad finds sitting down for any periods of time difficult and is so much more comfortable on his feet, so using the Bissell Steam Mop to restore the tiles to their original condition was a perfect job for him, he could stand all day and do a job that until the steam mop arrived, I'd spent 6 hours on my hands and knees, scrubbing the floor with bleach, white spirits, mould and mildew remover and hot water.

You can see the colour of the mop water after the first mop. 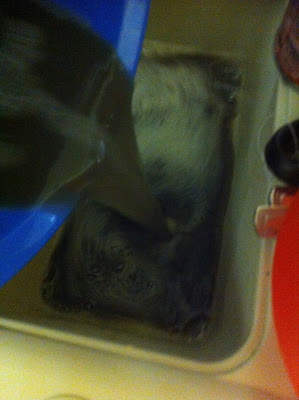 There is still a bit more work to do, the floor is slate and irregular so a bit of manual scrubbing is required, especially in the grout, but the steam mop lifts the dirt and it just requires wiping with a cloth. 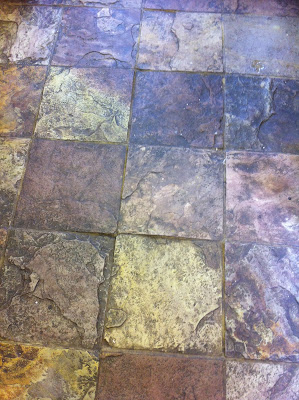 My dad was so impressed he took it home with him to use on his kitchen floor and completed the job in under 10 minutes.

Please note this is a sponsored post, Bissell leant me the steam mop for a week to use.

After the tenants leave. Today I met their son.

Today I caught the train into Worcester.
I visited the courts to action costs that were awarded, the magistrates to remove my tenants name from my address for further bailiff action.
All post that arrives is forwarded to the tenants guarantor as they've left no forwarding address. I'm also writing to the address on the back of every envelope informing the sender the tenant owes me money and several other people.
I also informed the local pharmacy that amongst the pile of crap the tenants left were many empty prescription boxes for various people in the town. 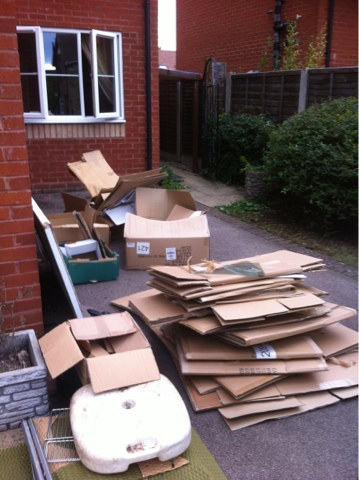 There was also a huge pile of cardboard boxes from Mountain Warehouse, they were dumped outside the house a week before they moved out, so I visited the Worcester store today to let them know that if credit was obtained from their store to remove the tenants name from my address.
I've had visits from bailiffs, there is endless post for the tenants and their adult children, applications for credit cards, addresses for credit companies.
When I return to South Africa I won't be able to deal with these issues. I really don't want new tenants having visits from  bailiffs or getting utilities turned off. I need to sort it while I'm here.
So in Mountain Warehouse I explained the situation, the young man took details including the tenants name and said he'd look into it.
I went for coffee, then it dawned on me, I'd asked him for his first name, I have him the first line of my address, he had asked if that was in Malvern. I returned to the store and asked another assistant to confirm his surname.
It was my tenants son. Neither he or the other assistance saw anything wrong in what he did. I told him he should've said there was a conflict of interest. He replied by shrugging and saying it was awkward.
I informed him I had no issue with him, but he should've told me, I had no idea he worked there, why would I? I explained to him again I was contacting all companies to remove his fathers name from my address and all post was being forwarded to the guarantor.
Posted by chickenruby at 17:15:00 1 comment: