This is the REAL Chickenruby, my name sake and what better name to use on twitter when choosing
an identity when I joined on the 19th July in 2009. 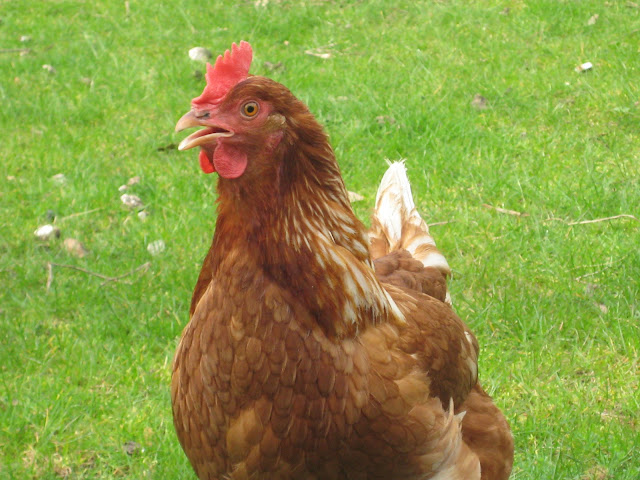 We'd helped out a friend a few years earlier when more chickens hatched than she could cope with and we took in a hen with 8 chicks for a few months until they were old enough to return to the small holding.

So when the youngest was offered 2 chicks at school, he said yes and on collecting him from school that day I had been told to bring a box with a lid and breathable holes, I had no idea what for at the time.

We rigged up a lamp and kept them in the kitchen until they got too smelly, hubby and youngest built a chicken coop and we moved them into the garden, keeping the lamp on until they adjusted to being outside. 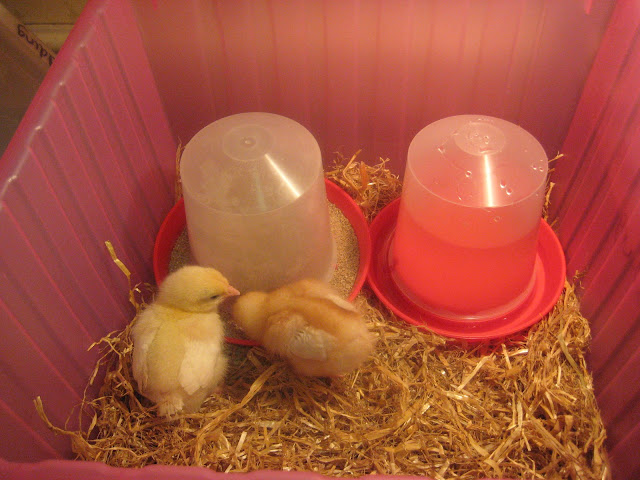 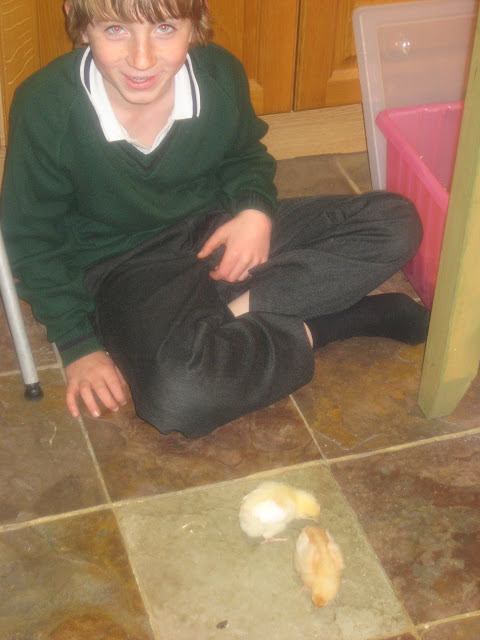 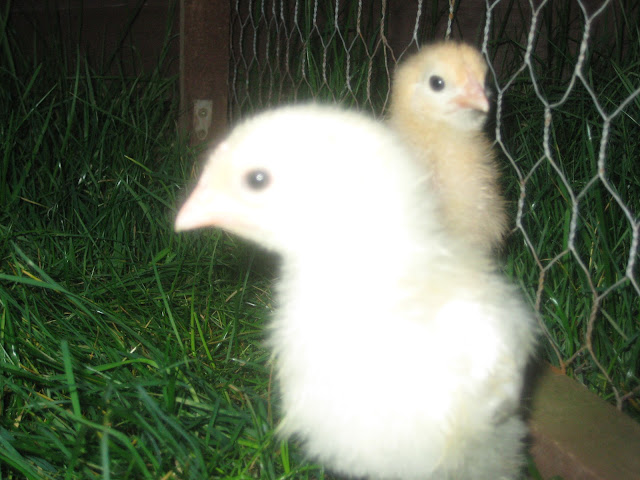 We had no idea of the sex of the chicks until they started to get a bit bigger. 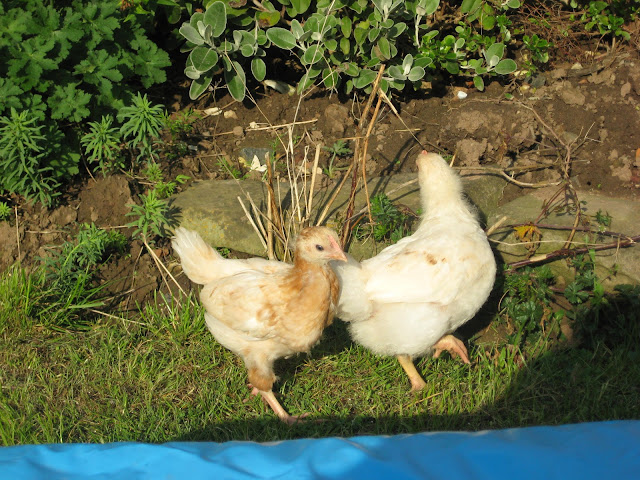 Ruby on the left and Robin the cockerel on the right. 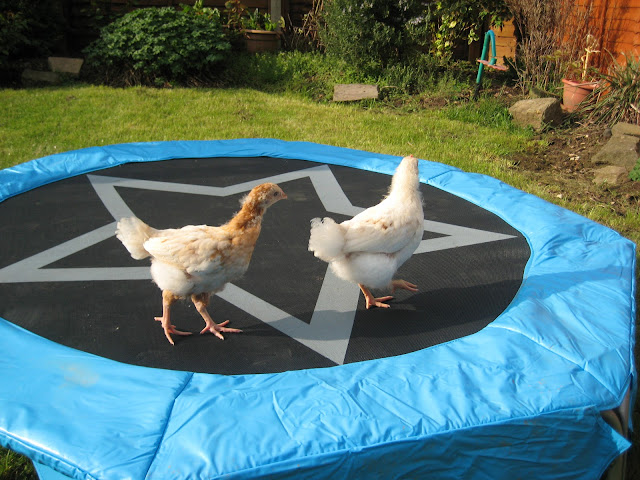 We were unable to keep Robin as we lived in a residential area and was very noisy in the mornings.
He went back to live at the school, but sadly a few weeks later a fox got him. 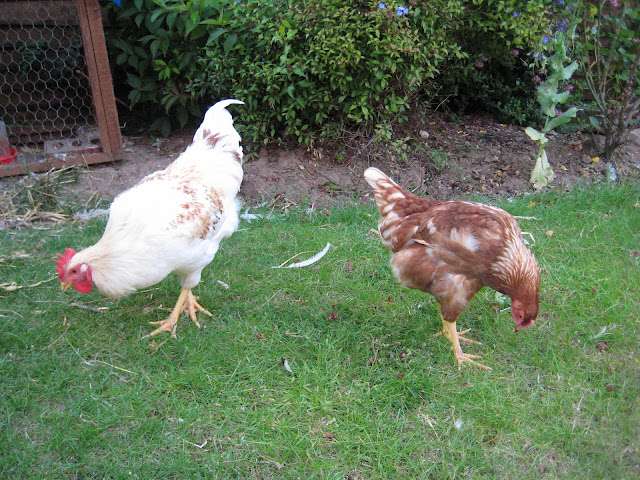 Ruby didn't settle on her own in the coop so we ended up not shutting her in at night so she could come and go as she chose. 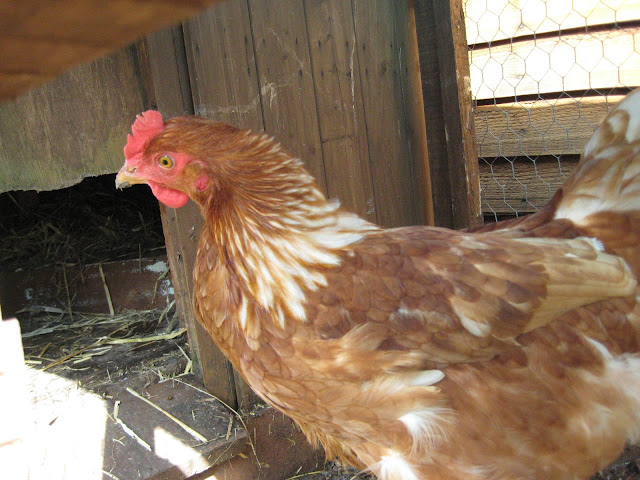 Ruby used to follow both hubby and I around the garden, she was always under my feet and she used to peck at hubbies leg and nudge him in the direction of the shed to fetch the spade and dig the ground. She'd sit on top of the spade as he lifted the earth and eat the worms. 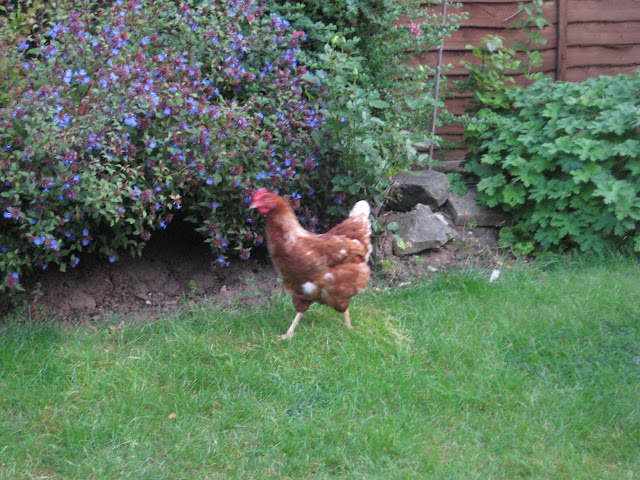 Ruby would sit on the arm of the garden furniture with us. 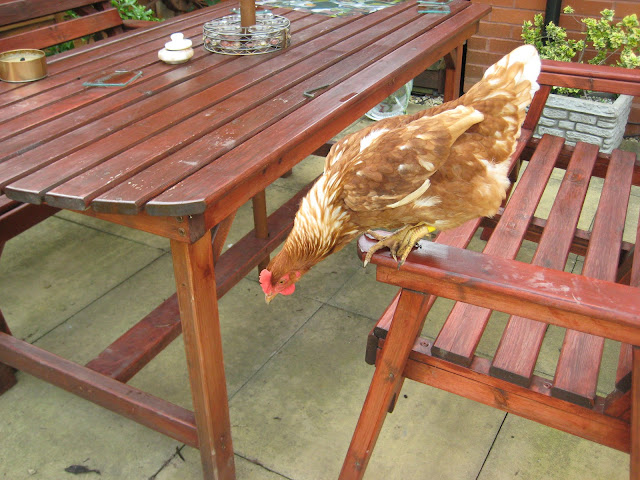 And eventually pecked out all the silicon from the conservatory and kitchen doors. 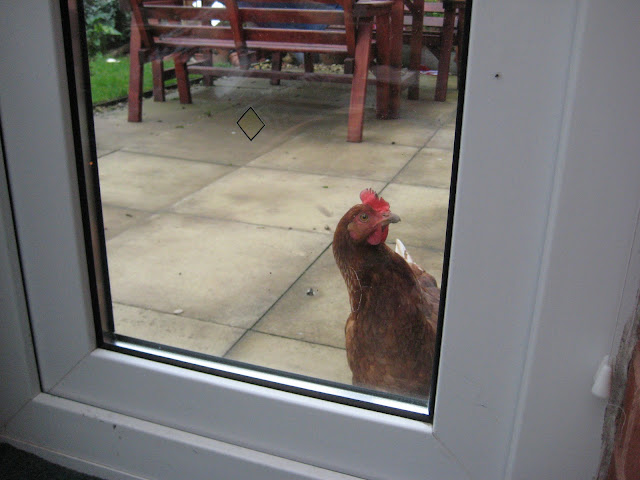 If we left the doors open she'd be in the house within seconds. 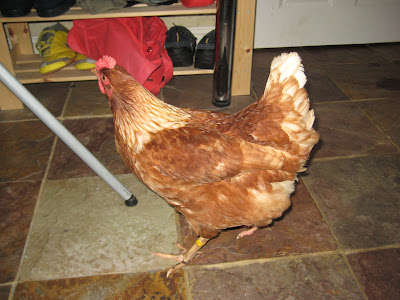 On two occasions Ruby managed to get out the garden, she would jump onto her coop and up on the fence. On one occasion she was returned from the neighbours house, over the road.

Why did the chicken cross the road?

Another time I had a phone call from the local primary school asking me if I could collect a chicken from the playground as it was causing the children to be distracted from their lessons. They called me as they knew I'd kept chickens before and could help them.

During winter we covered her coop with plastic tarpaulin. 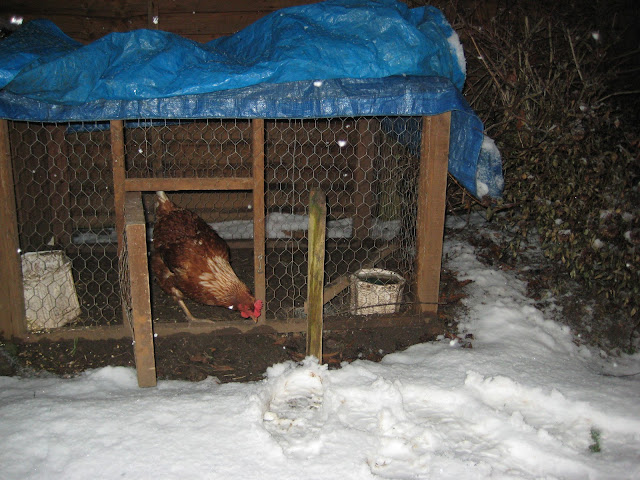 She was apprehesive about the snow and would cluck like mad to be rescued. 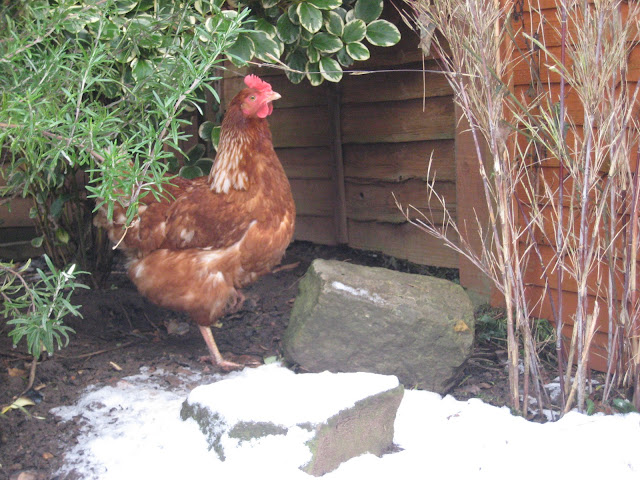 When the snow got too much we kept her locked in her coop, but she really didn't like it. 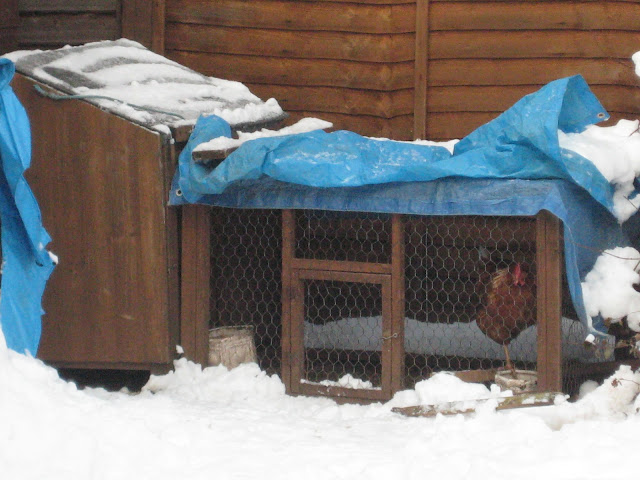 Eventually we decided Ruby was lonely, so my friend Julie and her son came to collect Ruby and take her to her sisters who lives on a small holding. 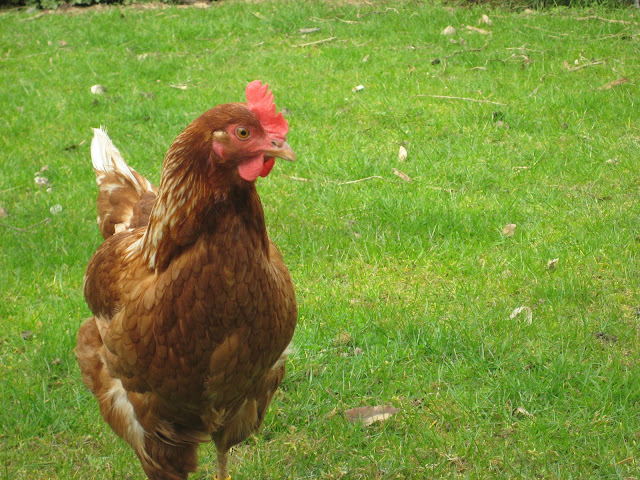 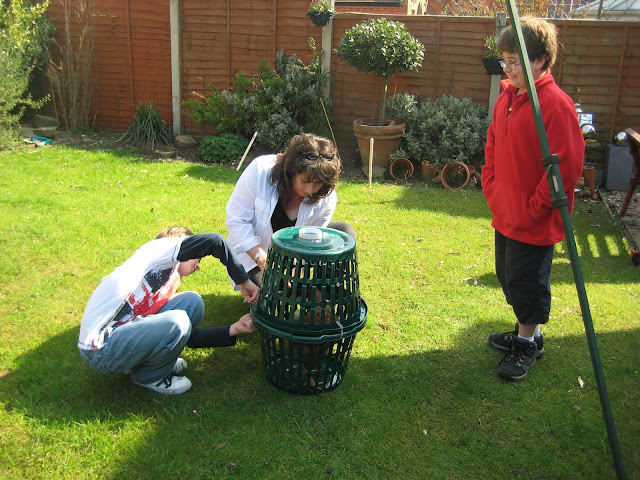 Ruby settled in well and soon became 'Queen Bee' and was often seen stood on the back of their dog and was a regular visitor at their back door, demanding her food. 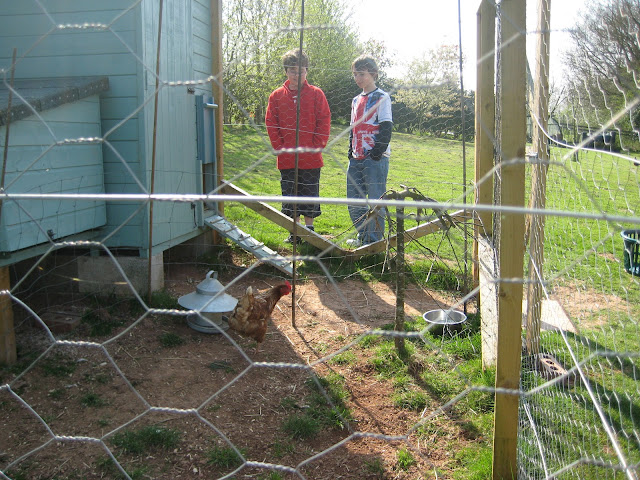 We visited a couple of times and she seemed to remember us, we left the UK at the end of that year and Ruby lived happily until 2012 when she was nearly 4.
Posted by chickenruby at 05:30:00