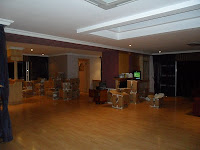 I’m not talking emotions.
Our furniture was removed from our house on December 23rd 2010 and since then the 4 of us have lived out of 9 suitcases and 4 hand luggage bags and most of that stuff was winter clothing as we didn’t leave the UK until the 18th January.
Our container was due into Durban on March the 4th. We moved into our permanent address on March the 1st and up till that date we were in temporary accommodation, which was very basic, we bought a few things we needed such as towels, a measuring jug and a baking tray to supplement the apartment equipment.
We also purchased some picnic stuff, cutlery and plastic plates etc to use in the new house and a King size bed for us and 2 singles for the kids which we’re now using in the spare room now our furniture has arrived.
We got rid of so much stuff before we left the UK as we were led to believe our furniture wouldn’t arrive until the end of April and we didn’t want to double up on stuff, but we’ve managed well, the only additional stuff we have now is bedding and towels. But we’re hoping for lots of visitors who can use it all. The furniture arrived on March 13th...see previous posts for the hassle there.
So what about all the other stuff? We’ve lived without it all for 3 months, so what’s the rush to unpack it all?
So the stuff from the attic has gone straight into the wine cellar...well wine won’t last long enough to be stored will it?
The photos albums haven’t been looked at and have gone straight into the cupboards in the guest room.
The guitars/amps/clarinet and other instruments are still in their bubble wrap.
Toys have been put into rooms, nice and tidy in boxes then promptly spread all over the floor. The outdoor toys are being used frequently...dumped in the pool.
The furniture is assembled, the clothes put away, kitchen all unpacked and all being used, the ornaments remain boxed as I’m waiting for the electrician to come to re wire the plugs so I can’t put the display cabinet into place yet.
So that’s it then....we’re here, we’ve arrived...we’re going to stay...I’m not bloody going through all of this again.

And to add to all of that...I now have a large collection of cardboard boxes. 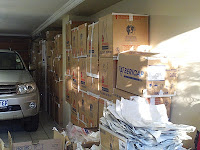