Is it really dangerous to pump your own fuel? 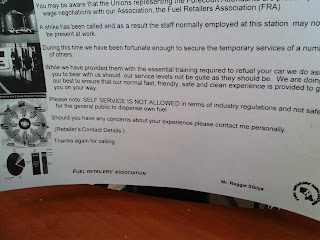 Every year in South Africa there are strikes, lorry drivers, pump attendants, factory workers.
Every year a pay rise is sought, every year the employers say no, so a strike takes place, pay rise negotiated and the workers return.
Sometimes the strikes get violent, the workers don’t receive pay while they’re on strike and usually return to work earlier than they wanted to to with a lower pay rise than deserved so they can feed their families.
But I digress a little, during the last pump attendant strikes in Gauteng this year, family and friends of the fuel stations were employed so business could carry on as usual. I’m still not used to sitting in my car at the fuel stations while the attendant pumps the fuel, cleans the windscreen, check oil, air and water so while I waited I asked if I could pump my own fuel and was told ‘NO, IT’S DANGEROUS’
Coming from the UK I found that response a little strange, it can’t be THAT dangerous, we have to pump our own fuel in the UK and check our own air in the tyres.
I think it’s more to do with stopping people stealing than the danger, especially when you see people in this country smoking at fuel stations.
Posted by chickenruby at 16:30:00