It's not hot here 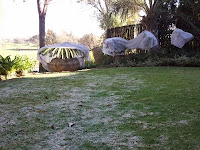 When I woke yesterday, there was a ground frost, all the neighbours have wrapped their shrubs, so I guess winter is here.

So the winter duvets are on and the kids have extra blankets, the fluffy socks are out and being worn in bed.

The temperature in the evenings, after sun down are between 4 & 11c, in the day, although its autumn it actually feels like spring to me, there are flowers out and the tepmerature in the day rises into the mid 20c.

Several light layers of clothing are required, which are peeled off as the day goes on. I wear my winter boots in the morning and by the afternoon I change into sandals...

It's too chillyfor the pool now, but I'm still using the steam room.

We left the UK with a covering of snow on the ground. We had a proper white christmas spent in the Cotswolds with 8inches of snow and the temperature hadn't risen above freezing for several weeks.

We arrived in South Africa in the middle of summer with temperatures in the mid 30s.

When the weather starting to get chilly here, I was asked 'aren't you cold?' well no I wasn't, the people asking the question are wrapped up in hats, scarves and gloves, while I was peeling my cardi off...the kids are getting told off in school for not wearing their jumpers in the day as they are both too hot, while their class mates keeps their scarves on, cuddle their hot water bottles and sip hot drinks from their flask.....

I wonder how long it will be before we complain of being cold?

Now, it's cold now, the under floor heating doesn't work, we bought coal and chopped down a tree in the garden
Posted by chickenruby at 17:18:00