What I don’t notice now 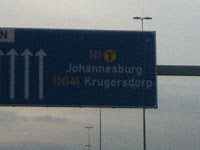 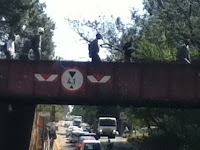 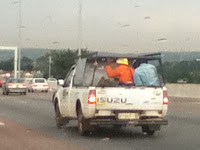 Everything is starting to merge. The TV jingles are so familiar now I sing or hum along with them and hippo.co.za South Africans version of go compare really gets on my nerves. I listen to Highveld 94.7 on the radio and sing along, I listen to the traffic reports and don’t wonder anymore why the lights are always out at Bryanston and know where they are talking about when they say there’s been an accident near the Olifantsfontein Road.
I now know where I can buy everything I want/need, finances permitting of course. The local Spar shop sells Dr Pepper, Rowntrees fruit pastels and gums. And PicknPay sell Hula Hoops. In a Cadburys taste test between SA and UK the local chocolate won hands down.
I’m still finding the weather a little strange, it seems that Spring started on September 1st and summer the following day, its rained twice since June 2nd, the temperature is in the high 20s in the day and around 15c at night, the winter took us by surprise, never thought it got cold enough to burst the water pipes.
I’ve stopped pointing out large numbers of people shoved in the back of buckies, speeding along the N1, but was alarmed to see a small child sitting in the back of one the other day.

The crowded trains with people hanging off the side no longer draw my attention, but the sight of kids walking along the railway line on their way home from school was a little alarming.

I still smile when I see the Johannesburg sign on my way home from collecting the kids to school, and as I drive towards Johannesburg I still love seeing the skyline.

Say football, mobile, text and sat nav despite it being soccer, cell, sms and GPS, but I get by, it’s definitely Braai and not BBQ and I still get a bit confused at the ‘circles’ (roundabouts) as to whose right of way it is, no ones.
Posted by chickenruby at 16:11:00