My Sunday Photo Week 120 K is for Kids

We could've chosen a better setting for this photo, but it was all about timing. 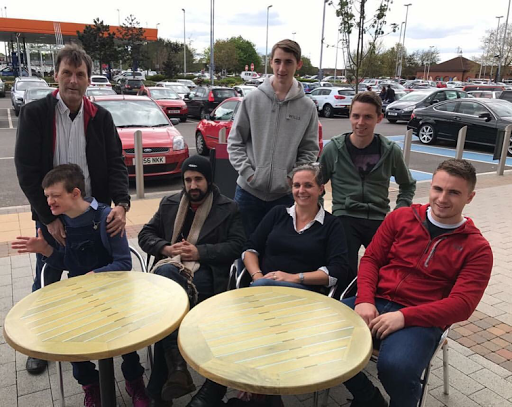 Back L-R
Peter, Alex child 5, Jamie child 3.
Front L-R
Stephanie child 1, Andrew child 2, Me, Dan child 4.
.
We had a professional photographer take this picture as in 'Steve (my nephew) here's my phone take a few pics would you please' while a row broke out over who had the best camera phone iPhone 7+ v Samsung S7 Edge.

The last time we were all together as a family of 7 was in 2007, that year, child 2 moved to Germany with the army. He now lives in the Forest of Dean. In 2010, child 3 left home and moved to Reading, he now lives in Leeds after a brief spell in Cheltenham. In 2011 Peter and I moved with child 4 & 5 to South Africa. Child 5 moved to Tewkesbury in 2013 to attend boarding school and child 4 moved to Yorkshire in 2014 with the army and is now based in Northern Ireland. Child 5 lives in a care home in Gloucester. Peter and I moved to Dubai the end of 2014 where we still live now.

Peter and I have managed to got various combinations of children together over the years, but we've often made separate visits to the UK and on the occasions we've travelled together, one or another of the kids has been away, most recently child 4 who was in the Falklands.

It's been a logistical nightmare organising this photo. The teen turned 18 on Friday so we booked a family dinner with close friends. We decided not to include Stephanie as she wouldn't have coped with the environment and we wouldn't have been able to switch off and relax. Everyone else made it, family with small kids, my nephew and his girlfriend who booked a day off work to come, child 3 came down from Leeds. But child 4 couldn't get over from Belfast until Saturday morning.

So we all arranged to meet in a car park in Cheltenham, they all managed to spare half an hour of their time, they all understood my need to meet up and get this photo.

This is the most precious photo I own, as a mum whose kids left home and lived 1000's of miles away. I have no idea when we'll all get together again. Child 3 is out in Dubai at the end of the month and the rest of our visit here will be spent with 1, 2, 4 & 5.

I'm back in the UK the end of June for the summer, but Peter won't be with me and child 4 is being posted abroad for 6 months. We'll try and arrange a home coming gathering in spring next year, lets hope that doesn't take another 10 years to put into place.

Email ThisBlogThis!Share to TwitterShare to FacebookShare to Pinterest
Labels: days out with kids, family, family days out, k is for kids, kids, mysundayphoto