Animal Tales round up - January and February 2016

I've taken a few pictures of the cat and dog the past 2 months, that haven't been included in any posts and I wanted to share some of the things the cat and dog have been up to, plus an unpleasant experience with 2 stray cats.

The stray cat No 1
I know I was being silly but this was really difficult. Early in January I witnessed a car hit a cat, I pulled over as did the man behind me, we rescued the cat from the road but it was dead, we placed it near the bins and knocked on a few doors nearby but no one knew the cat. The other cat that was there let me pick her up with help from another passerby and I took her to the vet to check for a chip and to make sure she was alright. On advise from the vet I took her in over night and let her back out in the morning. That evening I went to check the dead cat had been collected by the Municipality to discover the cat I took in the previous night, sitting in the spot where we had placed her dead friend. It is so sad, I cried all the way home. 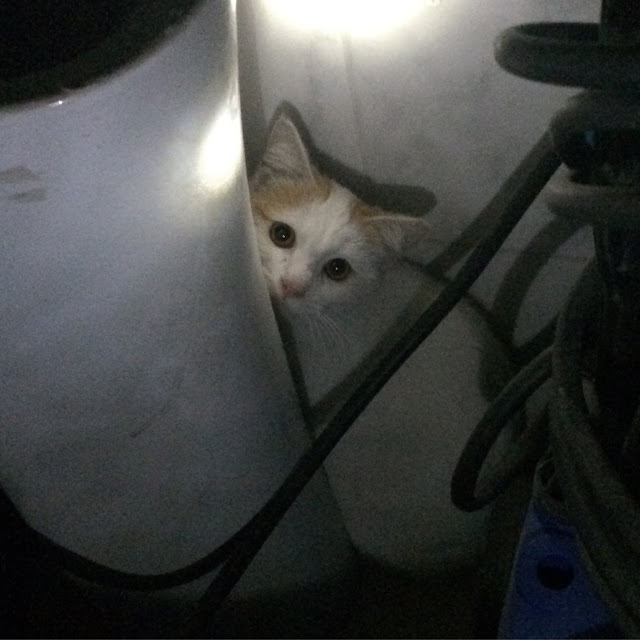 I went back to where I found the cat a few evenings later and she has moved on. The 'mad cat lady' (not me) who feeds all the strays has put food out again this evening for the strays. thankfully she has taken heed of the notice our gate and is feeding the strays on the waste land. 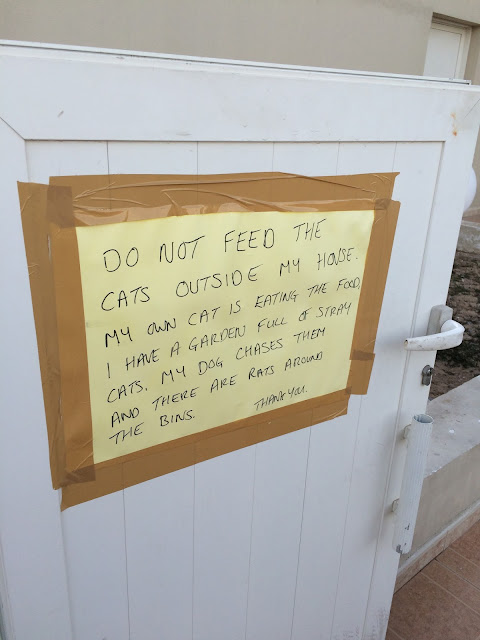 No 2
We encountered another stray off the Sheik Zayed Road, she really wasn't at all friendly, she had me walk round the back of the car to get in it with her hissing and another woman was scared and leapt back into the car, which her hubby found most amusing until he got out the car and the cat hissed at him also. 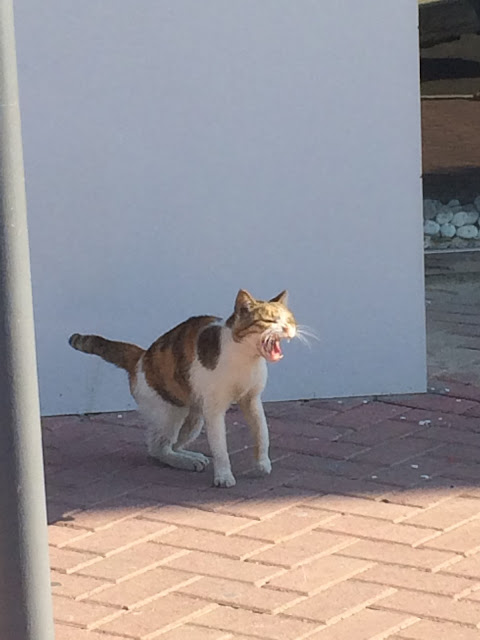 Our cat and the washing machine incident

We feed the cat on top of the washing machine as the dog will eat her food otherwise. our washing machine is a top loader, the drum doesn't operate when the lid is up but it will fill with water. As a rule the cat is very lazy and always expects me to pick her up when I dish up her food, however I was a little late home from work and she decided to jump up onto the machine in the hope of finding some leftover biscuits from the morning. I can laugh now about it, but I don't think the cat has fully recovered from her experience on discovering the lid was open and falling inside the filling machine, I scooped her out and she disappeared outside for a few hours. When she returned she was hesitant to eat her food, but she seems to have forgotten the whole experience now.

The cat has been very needy recently, probably because I haven't been at home during the day. 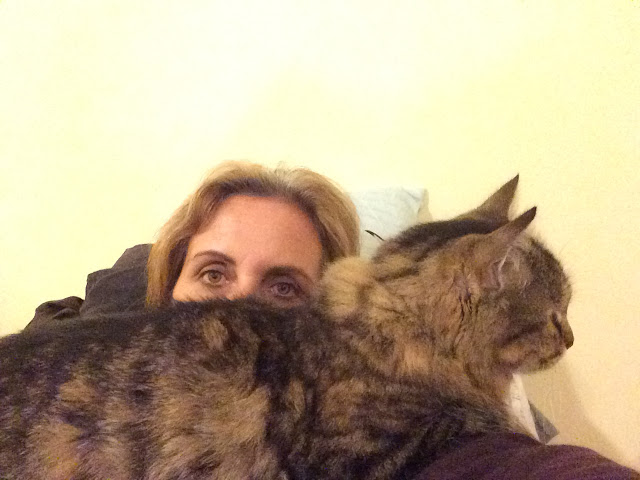 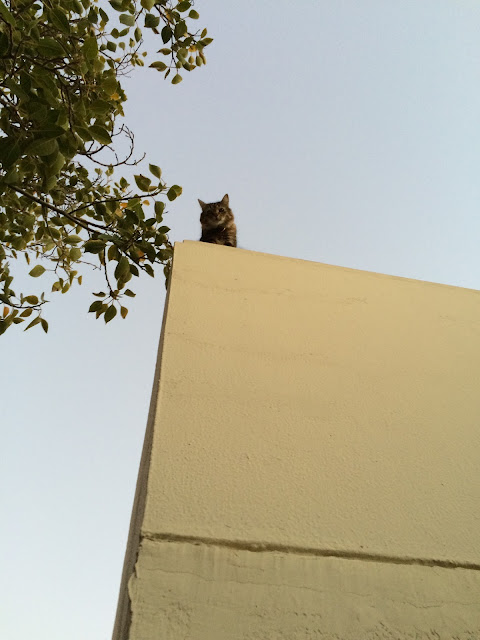 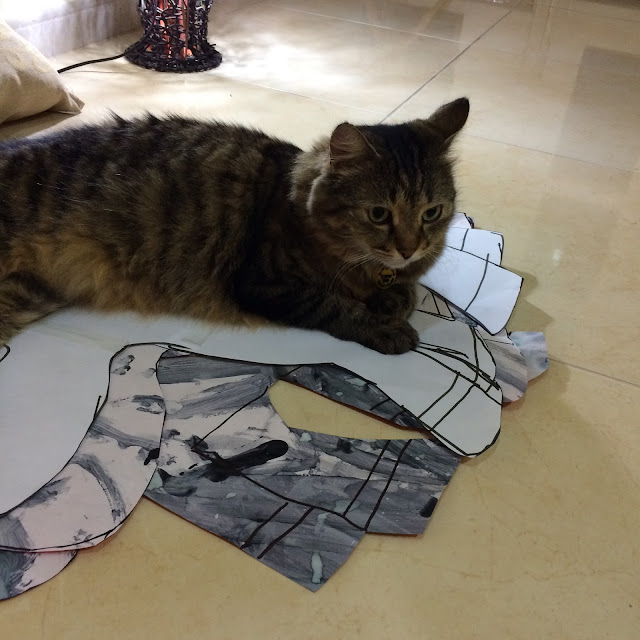 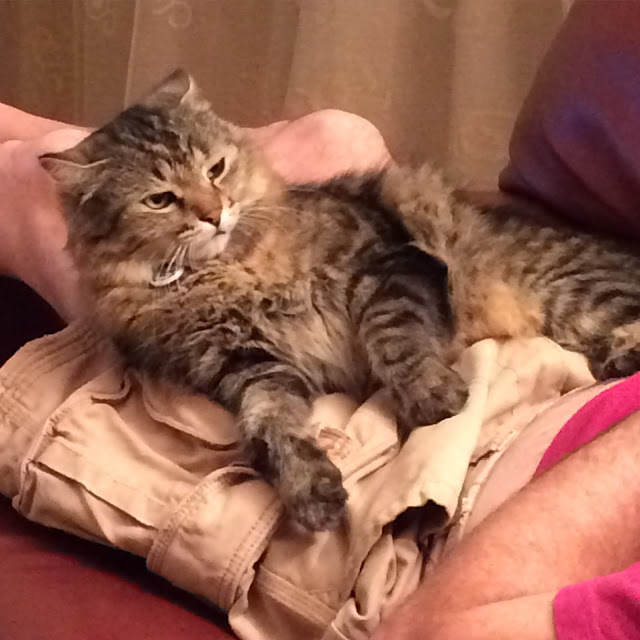 I returned to work the beginning of January and I'm out the house from 6.15am until 4.15pm Sunday till Thursday. Hubby often works from home, or he pops in and out during the day, or like last week he was travelling so Bob was on his own every day for the week. Bob wasn't happy. It's winter in Dubai so we leave Bob outside all day, he has plenty of dog toys, bones to chew on, a large garden to run around, a secure gate, company from the gardener, plenty of water and a comfy bed in his own dog house.

This is what I'm greeted with everyday when I get home from work, followed by demands for a walk, which I'm more than happy to do. 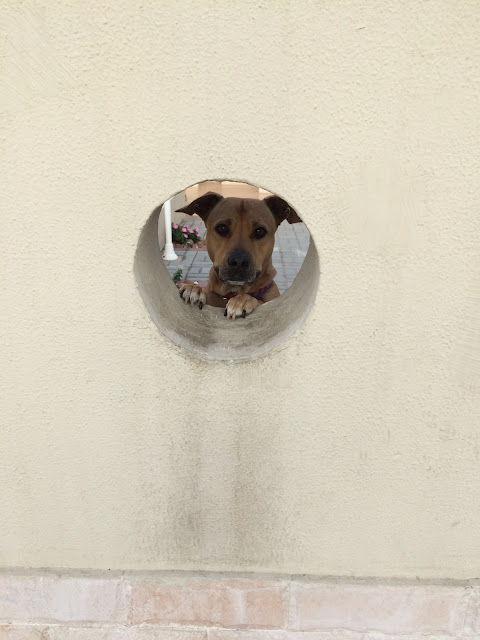 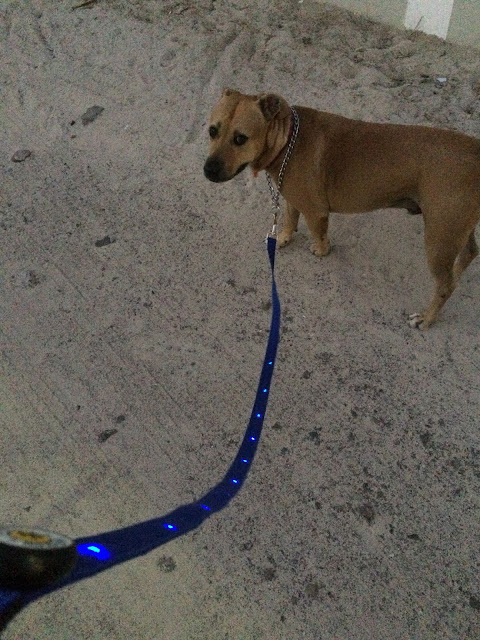 Bob has a very good sense of time and day of the week, which is based on routine and on Friday mornings, he pesters for his trip out to the desert. I try to get everything ready as quietly as possible and as soon as I open the car door he jumps in, despite every time being made to get out the front and into the back. 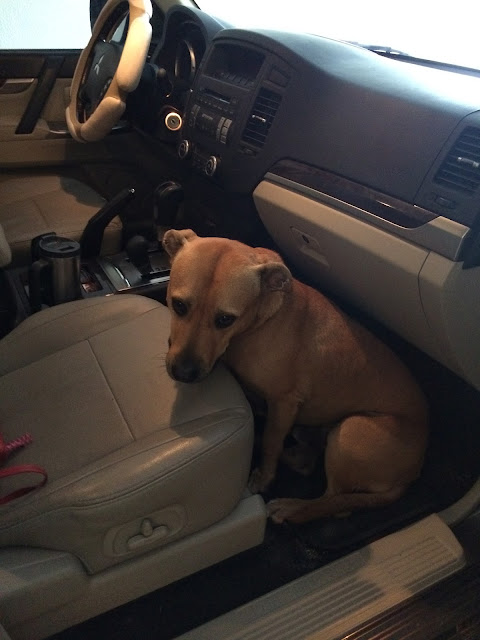 I also had to re register the cat and dog with the municipality. I have to provide their chip ID number, their vaccination date and a photo. To date there hasn't been data base in Dubai and if you lose your pet, you have to hope it has been taken to one of the vets in Dubai and they have scanned it and you have phoned all 26 vet clinics to see who has them. 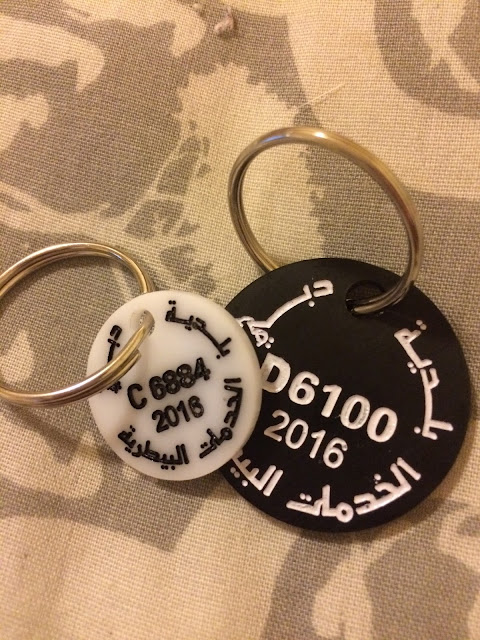 Bob is used to me being out all day now and recognises the signs that I am off, he takes himself off to his dog house and sits on his bed waiting for his treat. It is dark when I leave for work at 6.15am and a couple of nights I've returned late and it's been dark again. Hubby was away last week, the cat has to make a quick decision as to whether she is in or out for the day, she prefers outdoors and doesn't travel far, she seems to always be on the roof when I come home, keeping an eye on her territory.