So you've broken your arm...what next?

Saturday night, your child gets brought home, he's tripped over his own feet, fallen and you can see straight away it's broken...

There's a hospital near us, Unitas, Peter went there to the travel clinic, they must have an A&E, it's going to be a long night...oh wait it's not the UK, we've got private medical care which I'm still not sure how to use, but here goes.

Arrive at hospital at 6pm, Peter meets us there, he was out at the driving range.


Straight in, give a few details, Alex is weighed, blood pressure taken. Asked to go out front and set up a file for payment...

After the previous hassles we had with Dan in A&E and making payments, it's decided I will complete all the necessary paperwork as Peter travels so much with his job, it makes sense for me to recieve the bills and deal with it all.

Now bare in mind it's a good job Peter is there or Alex, aged 12 would now be all by himself, already crying, in pain and quite distressed. 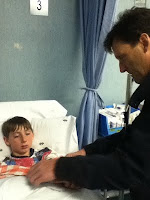 Give our med aid details, ask if they have an account with our providers and will all costs be covered, reassured yes, sign forms...hang on a minute, I'm not signing this...told to cross out anything I don't agree with and initial it...the bit I cross out says something along the lines of 'I accept that I will not hold anyone responsible for any negligence caused by our staff during any procedures and will not hold them liable'...er feck off.

By now it's 6.45pm I return to Alex, an xray has been booked, he's been informed his arm is probably broken and he may need surgery, again am grateful Peter is here as he'd had to reassure him it would be ok. 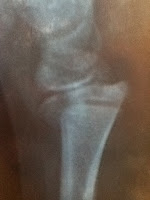 By 7.30pm he's been xrayed, it is broken, he will need surgery and to stay in for the night and at 7.45pm we're on our way to the ward...the adult's ward, he's wheeled into a room with two beds...er can he have his own room...yes, if we pay for it...I explain I'm not happy with my son sharing a room with a male, a grown up, a possible paedophile, No I'm not being over the top I worked in child protection in the UK, I demand admission to Paedeatrics. 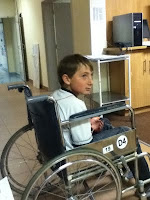 Once Alex was settled, head phones plugged in, I went home to wash, pack an over night bag and grab something to eat, leaving Peter watching Alex, watching the TV. 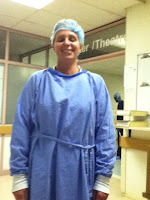 I returned to the hospital at 9.30pm. The hospital had fed and watered Peter and sorted out bedding for me for the night. Peter went home and an hour later as promised, Alex weas wheeled down to theatre. I was dressed like a smurf, Alex counted back from 10...'3....2....1 I'm still awake mummy' then out like a light... 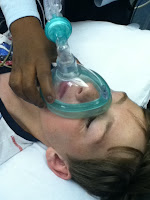 by 11.50pm we were back on the ward, bone realigned, he wakes, sits up and yells 'it's blue, I like it, I want hot chocolate and crisps and chocolate, my sandwiches, where are my sandwiches, yuk they're tuna, the nurse said they were chicken, where's my xray, I want my xray, did they cut my top, where's my socks, mum, mum'

I was dispatched to the vending machines for his order, he ate, fell asleep and I left the hospital at 1am, the hospital is only 7kms away and I ignored the lights and the speed limit and drove home.

Alex was very pleased to see me in the morning, he'd been in pain over night as his cast was too tight, the baby, the drip, the nurses had kept him awake all night, he'd been given more pain meds in the night and the nurses said he was so funny with the stuff he was coming out with....home by 10am. 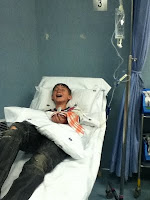 PS despite telling the Dr his cast was too tight, twice, we were ignored, and had to return on Tuesday evening to have the cast cut to relieve the pressure after he spent the day with his arm elevated and clutching an ice pack...I refused to pay any additional charges and made a follow up appointment for 3 weeks.

The bills started coming in and dribs and drabs, some were to pay myself and claim back, others direct...I informed our med aid company that I wasn't happy with this, had a little strop (I'm getting good at this) and all bills were paid direct by the time we got back off holiday. 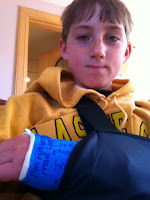