I got my results from my blood tests and MRI back on Sunday. I have a high white blood count, which indicates a virus or infection so had to have them repeated, they came back My MRI shows I have protruding discs on C5, 6 & 7 which are pressing onto the nerves and the spinal fluid. I also have no curve to my spine, all of which causes me pain, can aggrevate the migraines, gives me pins and needles in my thumbs and index finger and can cause me to drop things without warning. Surgery isn't an option and there is no long term damage. I did however point out to the Dr, that I've had this chronic pain and problems since 1994 and therefore I already consider it long term. The good thing being there was little change since the last MRI scan in 2000. Physio over the years and nerve regeneration and nerve blocks have helped but only short term, so basically this is just how it is, which I knew already.

My brain scan results were a little worrying but again there's nothing that can be done, I have a lesion on my frontal lobe either a cause of, or caused by my migraines, apparently nothing needs doing, they are fairly common.

I'm trying a new medication to prevent the migraines and have more physio booked to try and get me back to a better place for me to maintain the pain. This is a process I repeat every 2 years.

I also had an eye test on Wednesday which involved dilating the pupils and I couldn't see anything for a couple of hours. There's nothing wrong there either, other than directly linked to the migraines. It's just migraines......mmmmmm just? They cripple me for several days, at least once a month

I haven't been taking many photos recently, I haven't been doing anything of interest and when I do it just seems to be of the same things. It's rather boring in Dubai at the moment now it's summer. When I do go out it's for as shorter time as possible in this heat and besides my phone keeps switching itself off with the heat. I'm off to the UK tomorrow night for a couple of months, so I'll have something to interest me for a while. 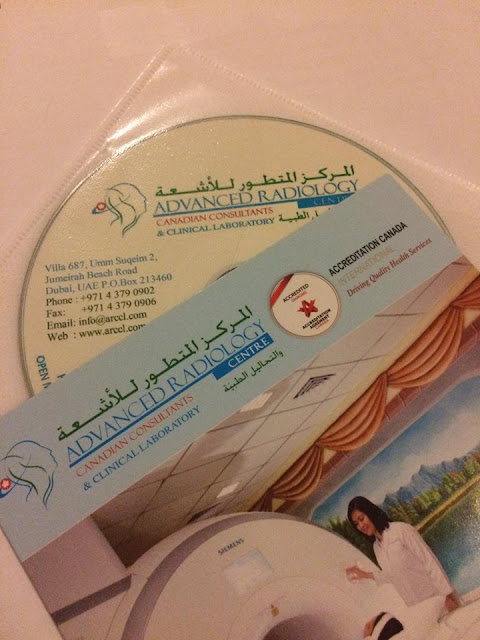 After getting my results I spent the middle of day with a friend for coffee and cake and then ran the hoover round, spending the late afternoon and evening watching you tube and blogging. 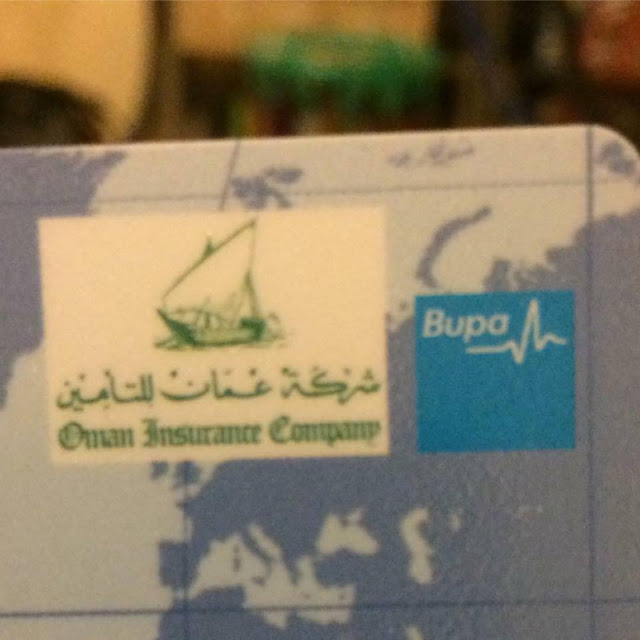 Waited in all day for the aircon repair man, he didn't show. Cleaned the bathrooms and bedroom and spent the rest of the day sorting out the medical aid and sons school. I'm so frustrated, at several points I actually cried and threw things. 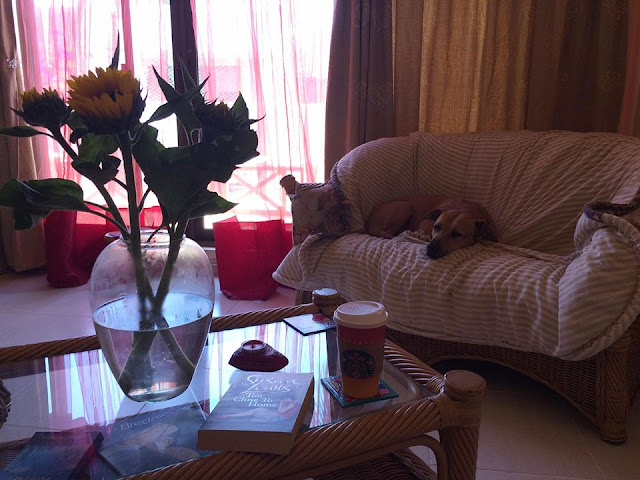 Bob had his injections ready for kennels when I'm away and Peter is travelling with work next month. Everywhere has changed their opening hours for Ramadan and not everywhere has updated their website, so I bought myself flowers and coffee and read my book. Bob and I visited the vets for his annual jabs.

165 Wednesday. Cake. I opted for beer rather than dessert. 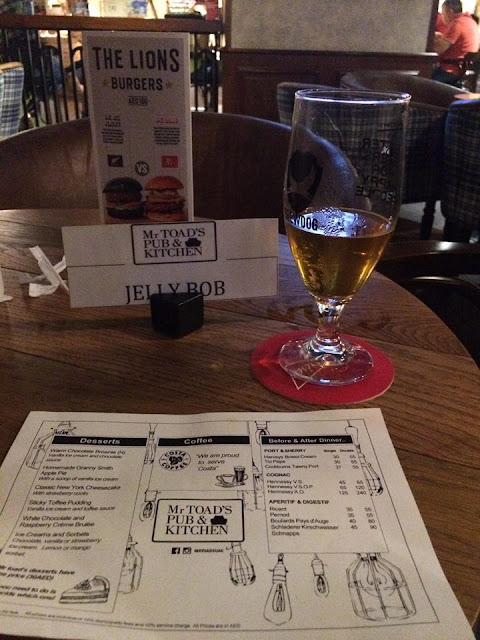 After the shock discovery of being weighed at the Doctors almost 3 weeks ago, I've cut sugar and bread out of my diet and have lost 1kg. I had physio, blood tests and my eye exam and in the evening I went out for dinner with a friend for the pub quiz. We came third, it was just the 2 of us and we really need to polish up on our geography. 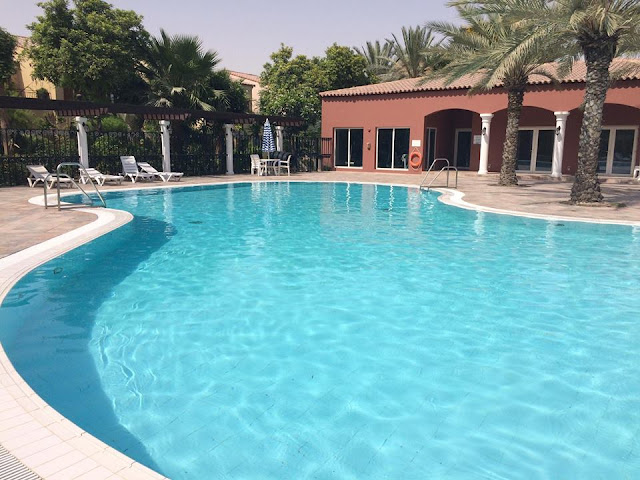 I stayed over the night before and after walking the dogs early morning, I enjoyed a swim in the communal pool, by 10am the sun was too hot and I could feel the sun burning my skin, so my swim was cut short. I took a walk in the afternoon for a coffee, the temps hit 46c, I was physically sick on the way back. 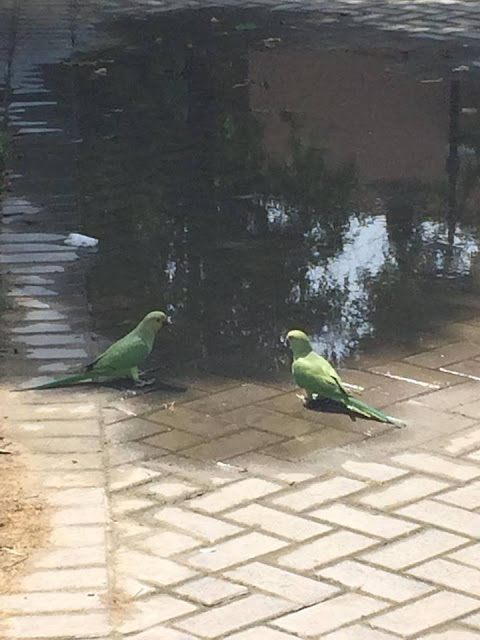 We went out for coffee in the morning, Peter had his haircut and we did some shopping. We've both been playing word cookies and are rather addicted to it, we watched TV and did little else, it's just too hot for being outdoors and everything else involves spending money just to be entertained.

168 Saturday. Song. When you walk past these tubes and touch them they play tunes, at Dubai Mall. 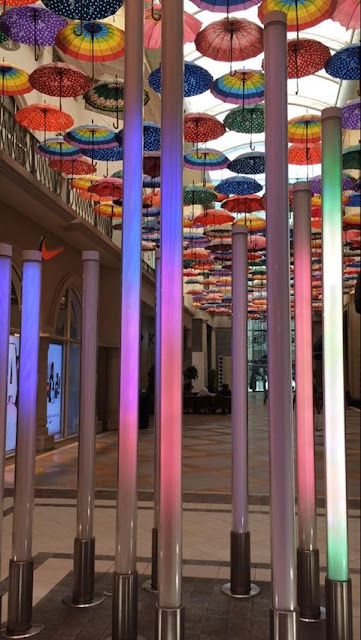 Up early to walk Bob, bathe him and wash his bedding ready for me going away on Sunday. It's my birthday next week, so I dragged Peter to the aquarium and we went out for lunch, food shopping in the afternoon, stocking up on dog and cat food etc whilst I'm away.