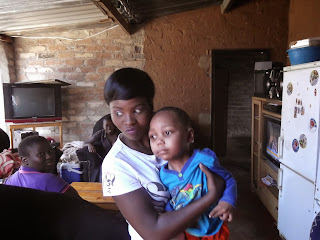 As part of my volunteer work with Santa Shoebox, there are spin off projects that I get involved with. Kungwini Welfare Organisation, Peas in a Pod and The Viva Foundation. There are so many vulnerable children and adults in South Africa and on occasion the experiences can be heart breaking.


After a celebration day I was asked by a social worker if there was a spare box we could give to one of their former pupils. A young disabled boy who lives with his Aunt in Olievenhoutbosch, a township south of Pretoria.


I went with the social worker to visit the child, through an array of shacks. Amo’s mother has died and his Aunt has been left to raise him. As she hasn’t adopted or officially fostered him there are no government benefits available to her. An Uncle pays for their electricity so she can run a fridge for his food and a TV that he spends most of the day propped up in front of. His older sibling cares from him during the day while his Aunt cooks at the local school, but she cannot earn enough money to provide him with an education and the medical treatments such as physio he so desperately needs. After meeting Amo and his family, I told his story on face book. I received a financial donation from my cousin in the UK and one of her friends and used it to buy nappies, wipes and creams and some staple foods. Hubby then suggested we purchase a pushchair and some other food as a one off donation, which I returned to him and his Aunt last week.


I explained to her that this was a one off and I would not be providing any further financial aid or donation and I hoped that having a push chair would make a big difference to their lives. Hopefully now she can take Amo out to work with her, he can interact with other children and people and his sister can either return to complete her education or find work and his Aunt can earn more and pay for the medical treatments Amo needs to improve his life.


Amo's Aunt said ‘thank you so much for the pushchair, you do not know how much this can help me’ well I think I do and I hope it does help. 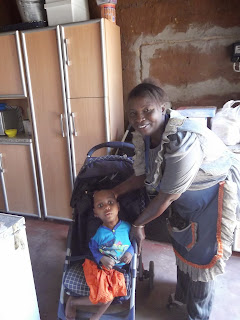