Surviving Christmas. it doesn't need to be stressful

My childhood memories of Christmas were of family, staying at home and my mothers cooking. 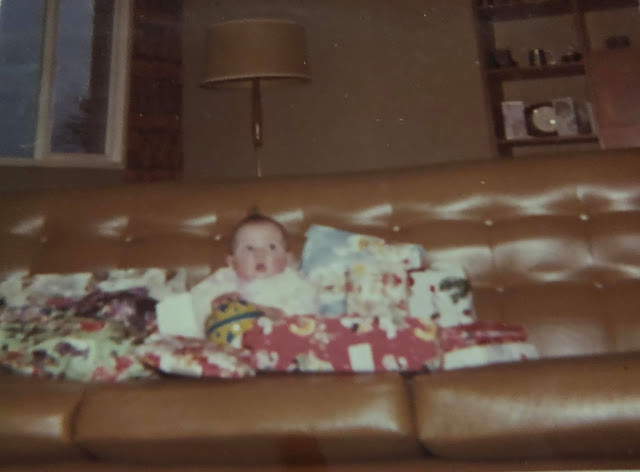 Christmas from the point of view as a child had few expectations on it, stockings on the bed, Dumbo on the TV, lunch and the Queen's speech, followed by my father trying to get us to play board games that always ended in a row and the contents of the game being lobbed across the room.

The decorations would go up on December the 1st and lights featured heavily. My mother's cooking also featured heavily, from the panic defrosting of the turkey in the bath full of warm water, to the cat taking chunks out of the turkey and my mother's attitude of 'fuck it' and just cutting the chewed bits off and still serving it. To the forgotten stuffing found in the oven 2 days later or the pan of brussel sprouts still on the stove after we'd finished dessert and the infamous year she tried to serve custard with the Christmas pudding she'd made from the cabbage water, my gran stopped her in time. My mother just added 'and that was just one year'

Christmas as an adult was spent working in exchange for the New Year off.

Christmas for me as a parent over the past 20 years has been different each year. We've always celebrated the day, bought chocolate advent calendars the kids have eaten on day 1 or pinched their brothers causing fights. There's been a stocking on the bed in the morning they can open the moment they wake, filled with cheap novelty gifts and even as adults if they've stayed with us over the holidays they still get one. 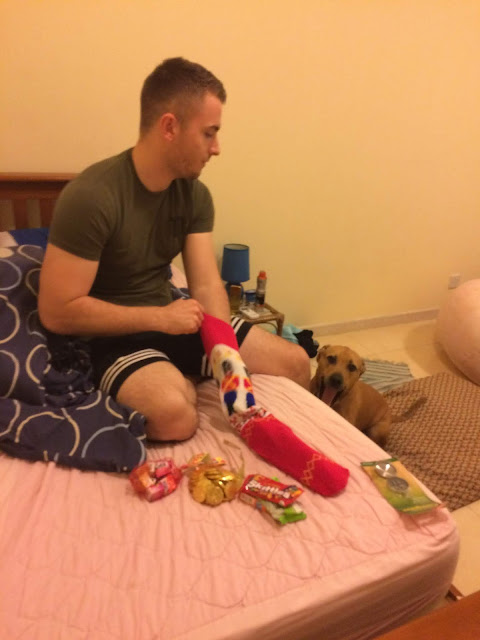 Main presents are still put under the tree as they are wrapped in the week leading up to Christmas, clearly labelled as Santa has always provided the stocking and the bank of mum and dad provide the rest.

Christmas's 1992-1999 were spent as above, but as a parent with my own children, after I remarried Christmas's 2000 till 2010 were mainly spent child free, we visited my gran, our parents, stayed with friends or just stayed at home on our own.

As a blended family with 5 kids, 3 mine and 2 Peter's we've lived together as one unit and if the kids wanted to spend Christmas with their other parent we were happy for this to happen and we'd celebrate Christmas when they got back a day or a week later, but always with all the kids together, plans would change with an extra night added so it would just be delayed.


2006. Our last Christmas together before they started leaving home 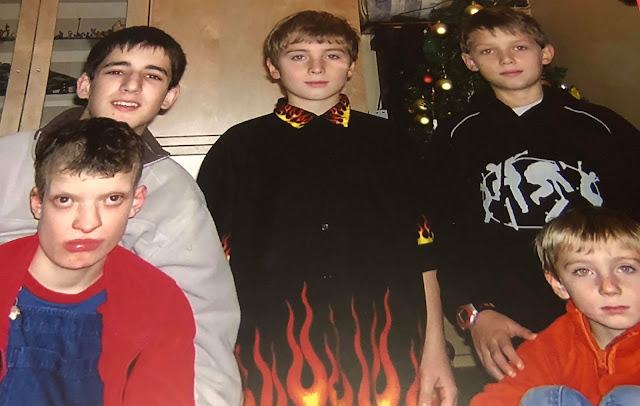 Our Christmas meal would be a normal Sunday roast but with extras, the table laid up. We'd put their stockings on their bed before they got home so they could see Santa had been and they'd open them before bed, in the morning, it would be breakfast, get dressed and we'd all sit round the tree opening equal numbers of gifts for each child, but not always of equal amounts, although we did set a budget.


The night before Christmas. Trying to stop the older siblings spoil the magic for the younger ones. 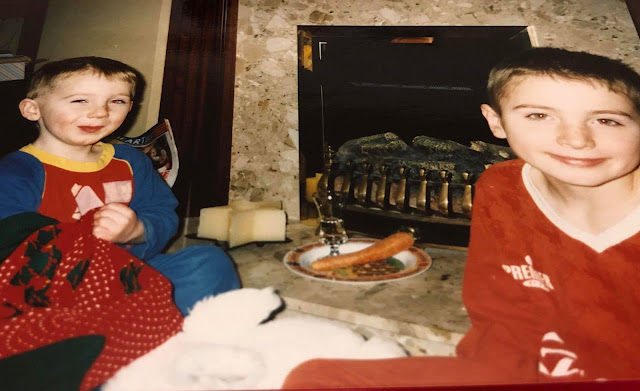 From their other parents side with aunts and uncles they'd have
£5 each or everyone clubbed together to pay for a family present for them all. Without Social media there was little pressure on gift giving, as by the time they went back to school 2 weeks later, they'd forgotten what gifts they'd had to recite.

2011-2013 were strange Christmas's, spent just with 2 of our children living in South Africa, we had salad or normal meals on the day after opening the gifts, spent the day in the pool, visited friends or had friends round. 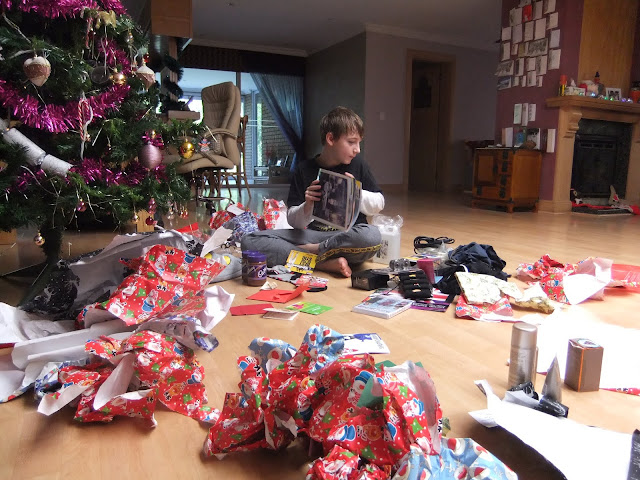 2014 we spent in Dubai with the 2 children, Peter and I had lunch in a cafe and the boys went to subway for their Christmas lunch. We'd spent the morning on the beach and we were living in a hotel at the time. 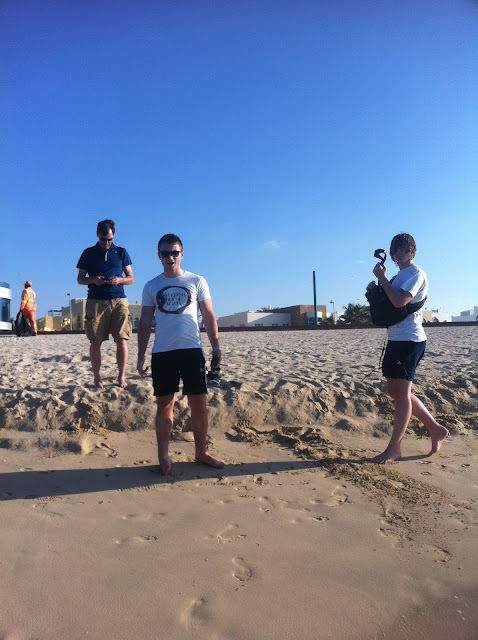 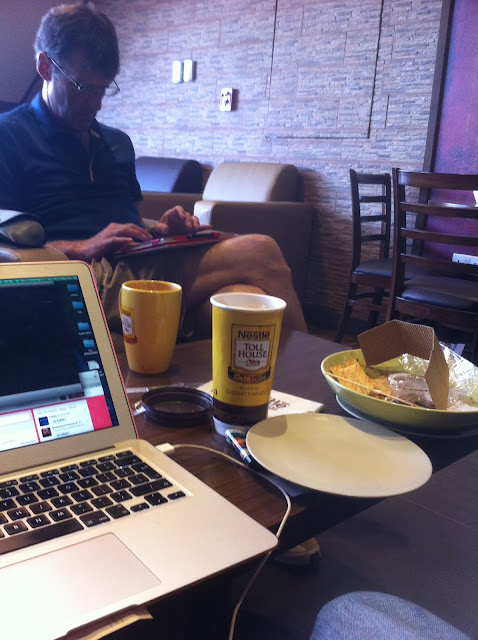 2015 was spent with child 5 we ate at a hotel and cooked a Christmas dinner at home on boxing day. 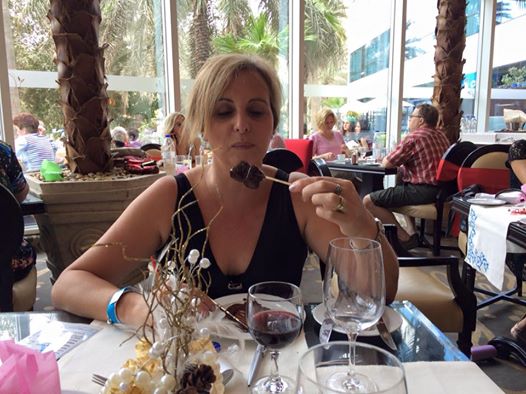 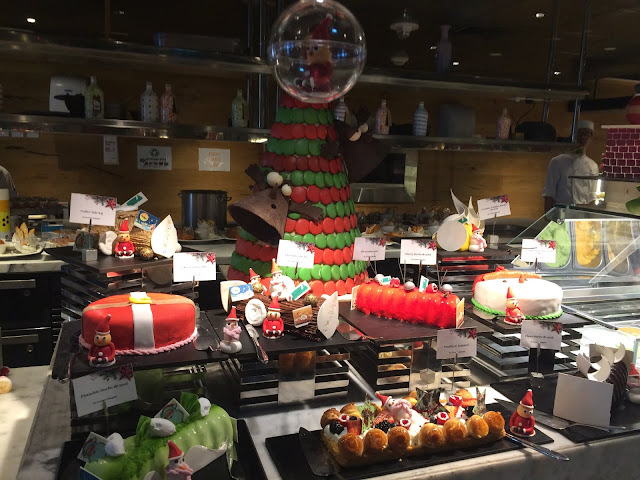 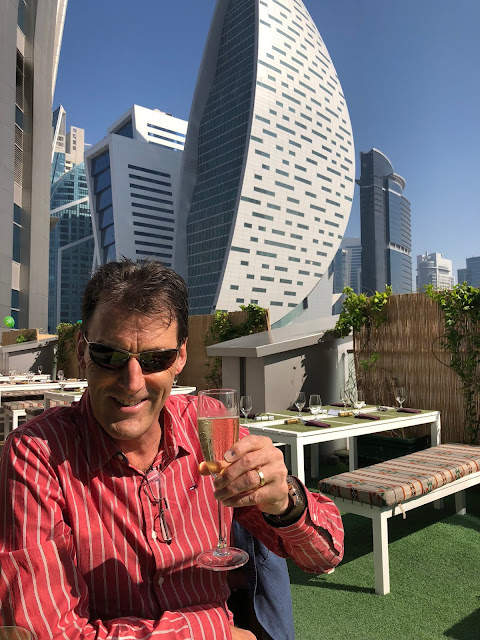 On reflection Christmas with the kids wasn't stressful, the was no need to survive it, it just happened.

Presents these days are a bank transfer. I always give a few little gifts to the children and their partners and leave presents behind for my niece, 3 great nephews and a few friends. I leave these in the UK in October time and get my mum to post my cards the beginning of December.

The most stressful thing I will have to do this year, is decide what to wear to brunch on Christmas morning, something smart with plenty of room for all the yummy food.

Last year there was a wall of donuts on offer. 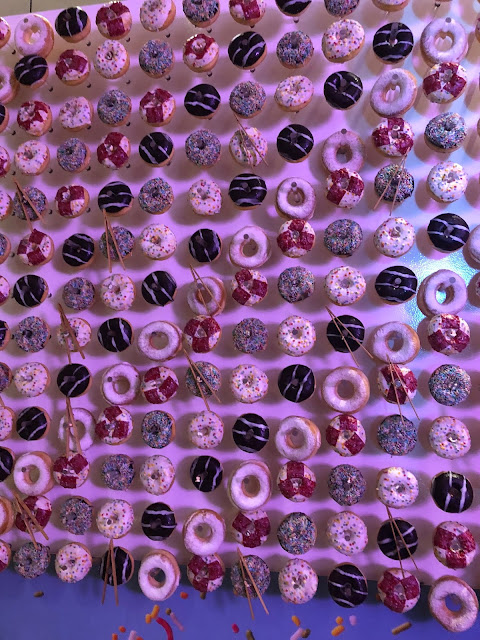 I'd love to have a traditional Christmas with all my family round the table, but the logistics/cost of doing that are unthinkable, who knows? maybe one year.