I spent my last few days in Dubai sorting the furniture and our personal belongings out into 3 piles. What's staying in Dubai, moving to the UK and being disposed of/donated.

It's been a harder job done in a short space of time, due to the uncertainty of when I'll next be allowed back in Dubai. At the moment it is closed to everyone, my next flight  27th April till 27th May has been cancelled.

Peter will be out in Dubai until I can get back or he can leave to visit me. We have a wedding to attend in June, which has now been cancelled, we're not disappointed, we understand the seriousness of this virus, we just have plan a, b, c waiting to be implemented.

If I'm honest I'd rather have stayed in Dubai, where I'm at less risk of catching the virus, but my MIL has been house and pet sitting for the past 3 weeks, she is 82 and would rather be isolated in her own home. Also our eldest child is in care in the UK, she's not at risk physically, but requires 24/7 care and if the staff levels drop, then so does her care and there's always a slim chance I might need to have her home.

There's not much difference to my usual week, being in isolation. I guess I'm more likely to catch the virus from the travel and being back in the UK than I was in Dubai. I don't miss the going out, I miss the ability to just spend a couple of hours out walking Bob, I'm still walking him once a day, but varying the route and making them shorter in case we have to go into full lockdown at some point.

I've had more contact with friends this week than usual, because I'm back in the UK where I can access voice over internet, such as Skype, facebook and whatsapp calling.

82 Sunday More arranging and sorting ready for our move in May, however we will just extend the rental contract here for a few more months if necessary. Emirates have cancelled all flights and the border will close on Wednesday. Was called in for another blood test as white blood cell count had shot through the roof again.

To top it all off, we had more rain and some localised flooding. 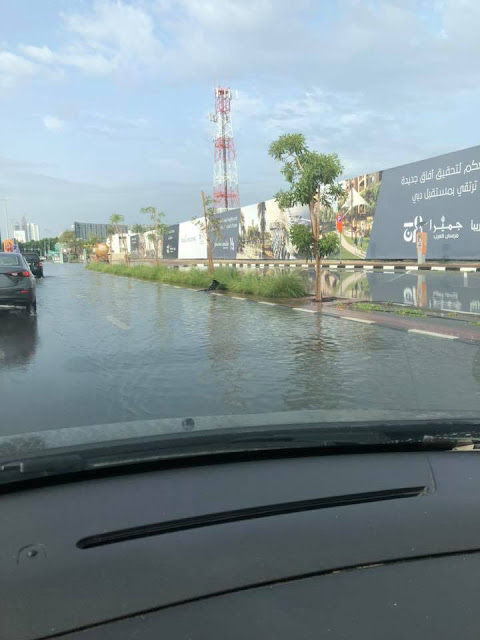 83 Monday As above, all done. Did a food shop for Peter before I leave, as check in was open and my flight is still scheduled. Finished organising the house. WBC back inside the normal range, no idea why it went so high. 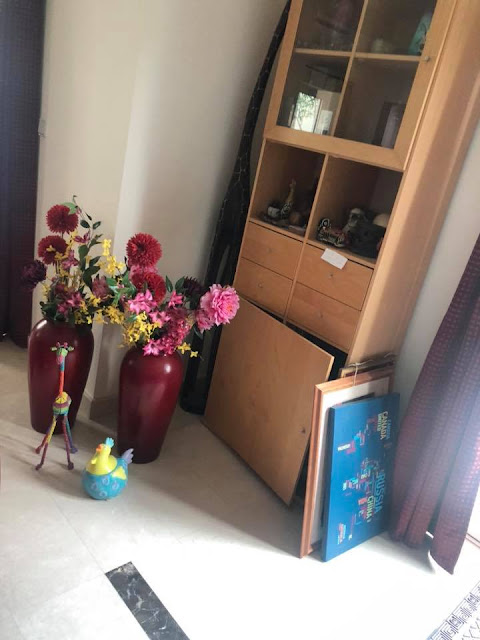 84 Tuesday Flight to Heathrow, the last British Airways flight out of Dubai. Both Dubai and Heathrow T5 were empty. I was collected by friend due to my time of arrival and stayed at her house over night, we maintained a safe distance. Who knows when we'll see one another again? 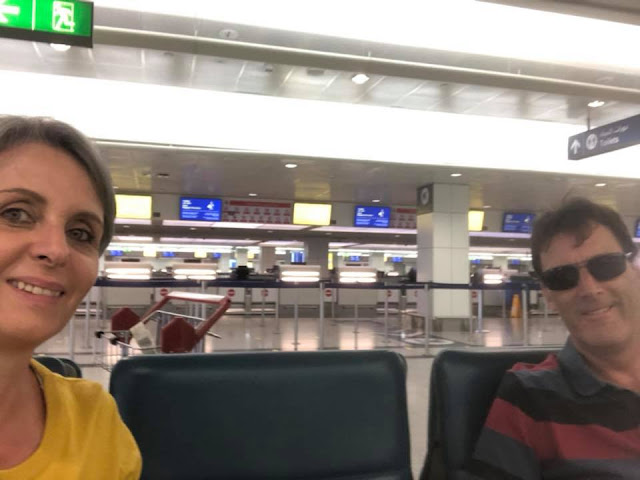 85 Wednesday A lift to Watford then 3 trains and a short walk home. MIL had left by the time I got back and had left milk in the fridge, after unpacking I took my shopping trolley to Lidl and stocked up on fresh fruit, vegetables and meat. The toilet overflow is broken so I had a go at fixing it, it'll do for now but the downstairs loo is now out of action until I can get a plumber in or purchase a new ball valve. My oldest twitter buddy to the rescue. 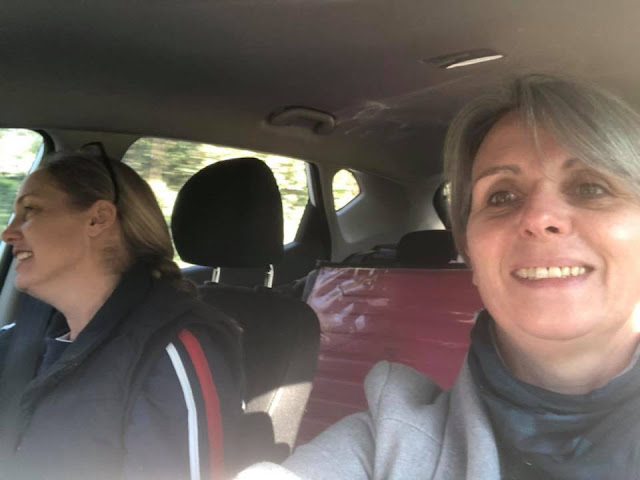 86 Thursday The weather was glorious so I spent the day in the garden after taking Bob out for a walk. I then cleaned out and tidied both the sheds, borrowed the neighbours mower and cut the lawn, reclaiming back the patio and a path. Dug out all the Ivy growing over from next doors garden that had caused my fence to collapse back in December. 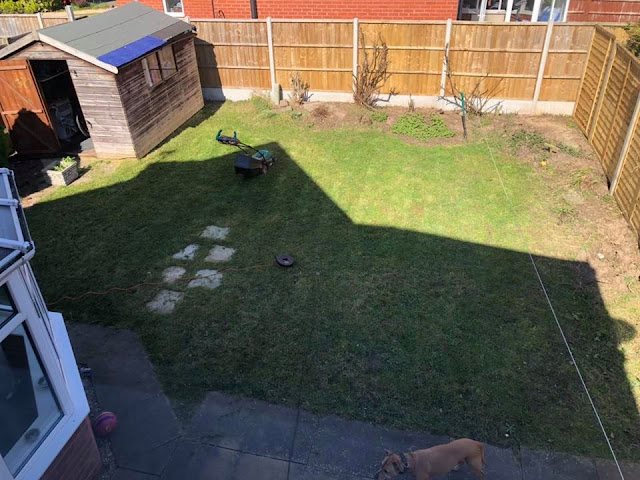 87 Friday Another day spent in the garden, more digging, weeding and tidying up. I have 4 large concrete pots I'd like to move, but even if I empty them of the soil, I still won't be able to shift them. Managed to move them just enough to get them off the edge of the lawn. Dialled in to a zoom call with my friends in South Africa to keep up to date with what is going on in their part of the world,  only allowed out with a permit if you are essential staff. My very own cat cafe. 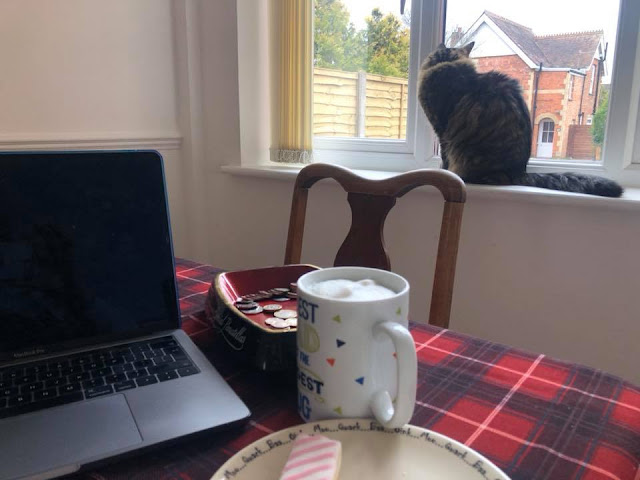 88 Saturday Attempted to dig a new border, but it was cold and windy out, so I collected up all the bricks and laid them out, marking the new border. I fixed some loose panels on the shed. Sorted out the parcels I intended to post to family for Easter and birthdays. I condensed the contents to letter box style as I don't believe a trip to the post office is essential and I have enough stamps for the postage. Afternoon spent baking, watching TV and blogging. Found a new route to walk. In the 8 years we lived here I never knew there were allotments 200ms from our house. 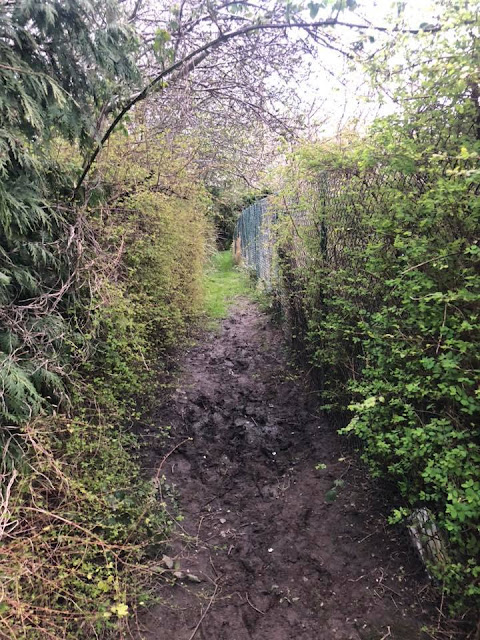 I'm running out of things to blog about


You are invited to the Inlinkz link party!
Click here to enter
Posted by chickenruby at 00:25:00