One Daily Positive - Week 14 Getting out in the garden

This isolation is no different from when I'm in Dubai other than the fact I can't go out for coffee whenever I want, usually once a day. With the weather hotting up in Dubai, it won't be long before it's too hot to sit out in the garden and I'd be stuck indoors all day. Peter is busy working from home and it's not slowing up as he his job is to provide chemicals to the the food and beverage industry. We both think I've made the right decision to return to the UK, despite not knowing how long it'll be before we will see one another again.

I've got plenty to do here with the house renovations and the garden as well as writing letters to various care homes for Postcards of Kindness and to family and friends.

However there are some noticeable differences, I can still walk Bob daily here in the UK, people are friendlier than ever, although I do feel like a social pariah when we leap out of each others way. My neighbours are chatting through windows, over fences, people are stopping to look at the rainbows in my windows and we're asking one another if everything is OK. The phone doesn't stop ringing, post is coming through the door and voice over internet isn't blocked here so I'm chatting more with my friends than ever before.

On Tuesday whilst out walking Bob, there was an old lady at her window, waving frantically to me, she managed to open the door, I asked if she was ok, she said she hadn't seen or spoken to anyone since her food was delivered last week and she thought I looked friendly. She lives in a retirement block, but the communal areas are out of action, they're organising food and prescriptions to be delivered but there is no one on site. I've said I'll walk past the same time every evening.

89 Sunday Day spent in pjs, watching TV, sorting some paperwork, reading and eating junk food, big mistake, felt miserable and bloated and didn't sleep well that night, won't be doing that again. Walked Bob out to post some Easter goodies to family and friends. I'd bought everything back in February and already had the stamps. I only posted what would fit in the letter box to save a none essential trip to the post office and I now have 4 easter eggs, seeds, bird feeders and bath bombs to use for myself. Did mums food order over the phone. I'd booked a slot for her over 2 weeks ago and had just added the minimum spend to secure the slot. 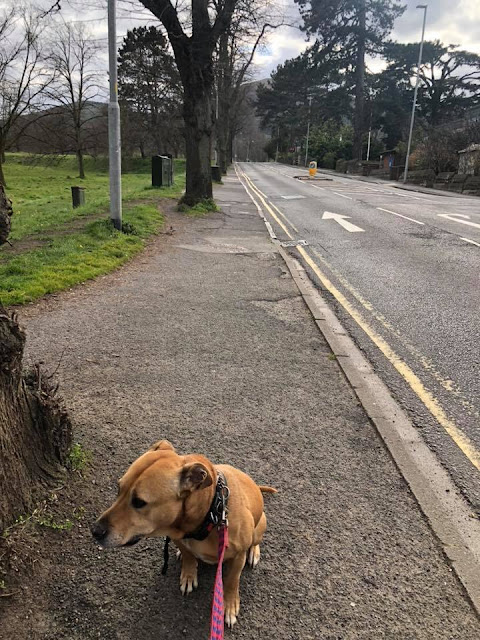 90 Monday Spent the morning sorting through what I actually have in the house for things for me to do over the coming weeks/months. Wrote some letters and decided to make the trip to Waitrose to purchase Gluten Free foods, fresh fruit and veg. There was a 45 min polite queue. I was surprised at how many people were just popping in to pick up food for tonights dinner. I had my 'old lady' shopping trolley and a large bag to carry home with me, some 2 miles. I was out for 4 hours in total. We celebrated Pushkins 11th birthday with cake, cards, decorations and gifts. 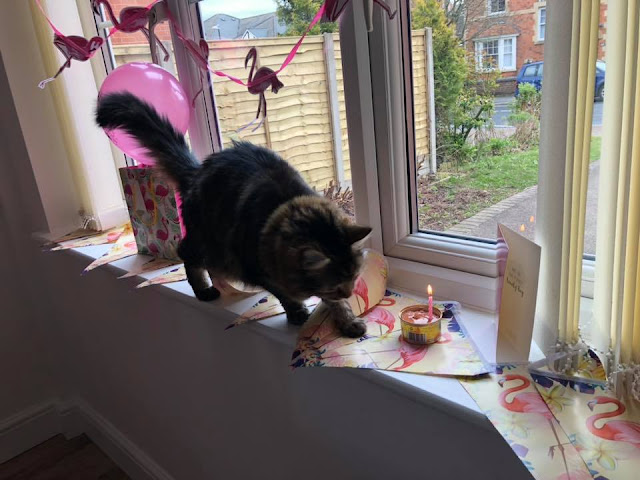 91 Tuesday I spent the day writing letters to family, friends and Postcards of Kindness, picking a home from the website for each letter of the alphabet and I've enclosed a Stamped addressed envelope so they can write back without the need to visit the post office. Walked Bob in the evening and had GF pizza, sweet potato fries and beans for dinner and a glass of wine, finishing the bottle I started last week. Mum called in the morning and a friend in the afternoon and I spoke to MIL and child 5, both doing well. 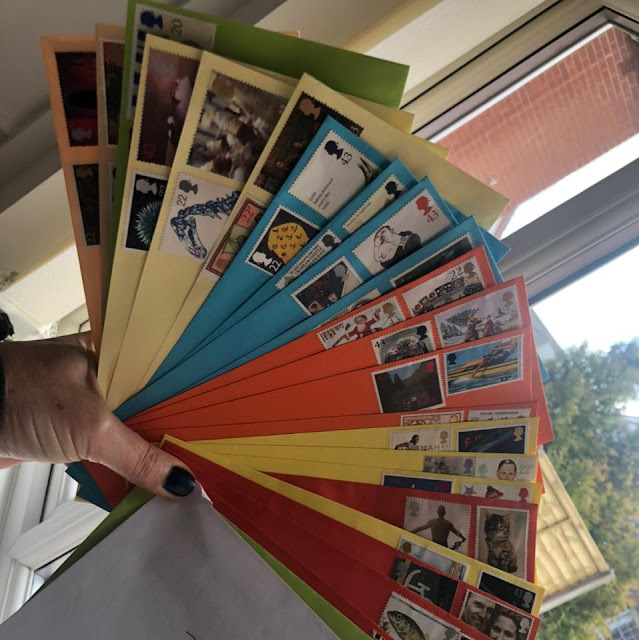 92 Wednesday Started the day hoovering and did the ironing. I'd been saving it for best.  Then I went out into the shed to pot up some seeds, using the one bag of compost I'd bought in February and repurposing the recycling as seeds trays. I then spent the afternoon/evening in the dining room or cat cafe as it's been renamed and caught up with blog comments and scheduled some posts.

93 Thursday Had breakfast and then spent the morning blogging, commenting and sorting through photos on the laptop. Took Bob out for a walk before lunch time and found somewhere I could let him off the lead. More time in the garden, edging the borders with house bricks I collected from around the house. Joined in with the clapping and felt emotional again. 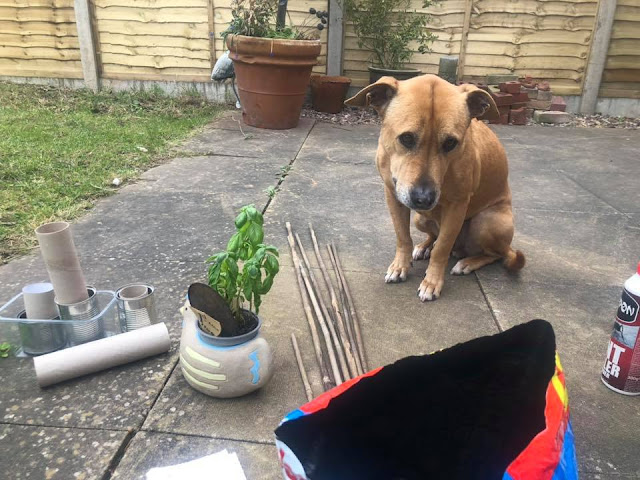 94 Friday Planned my meals for the day based on use by dates, did some blogging, opened and ate half an easter egg. Took Bob back to the field with his ball, he found some fox shit to roll in and eat and wouldn't come out of a stream he found also. I placed some teddy bears in the windows and finished off a pair of giraffes I made with RedTedArt that have also gone in the window.

This used to be a border, I removed all the shrubs back in February and have levelled it our ready to seed. 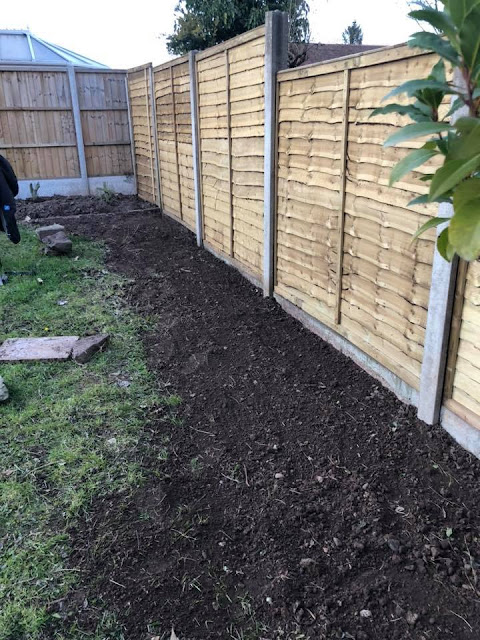 95 Saturday Finally enough clothes to put a wash on, also washed the towels, highlight of my week so far. Wrote thank you notes for the postman and rubbish collectors and did some blogging/commenting. Phone and skype calls planned this evening. The rest of the day involves a dog walk and hopefully it'll warm up enough to finish the last bits in the garden.

I'm shattered but pleased with the work in the garden so far. 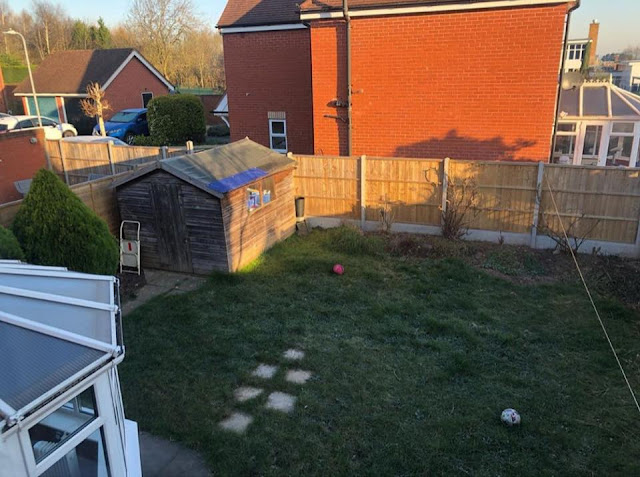 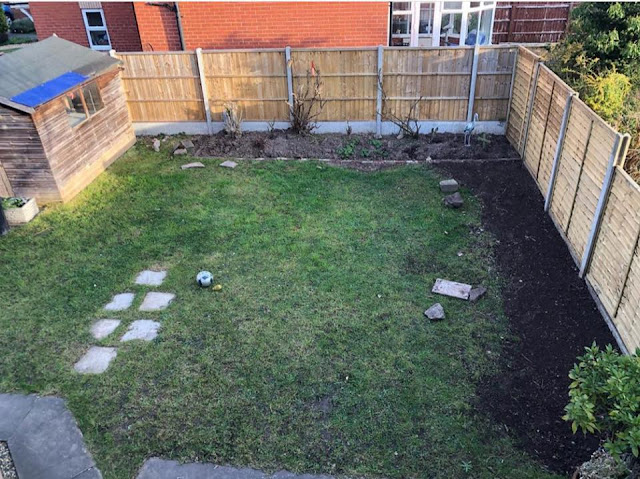 Why I don't like hearing news on Social Media


You are invited to the Inlinkz link party!
Click here to enter
Posted by chickenruby at 13:20:00