I've no idea when these road improvements started, but I've found minutes of meetings from 2014 discussing planning permission and compulsory land purchase orders to be made.

My normal route from Birmingham airport for the past 10 years has been down the M5 to the M50 and off to South Wales. In 2019 I started repeating a familiar journey to our home in Malvern. A journey that takes 15 mins and covers 8 miles from the M5. The Worcester Southern Link Road from the M5 J7 to Powick is just over 3 miles, but in reality can take over an hour each way on single carriage way, hence the improvements.

The A4440 Worcester Southern Link Road, is one of Worcestershire's busiest roads, accessed by over 30,000 cars each week day.

I can't find a date when the project will be completed or the total cost spent, estimated around £33 million. There are footbridges, cycle paths, work to the railways, flood plains, roundabouts increased in size and almost all of the route is now dual carriageway.

The photo of Carrington Bridge is taken from the Ketch roundabout. Back in October, 6 steel girders 70ms long and weighing 70 tonnes were lifted into place by a crane 180ms tall. I watched them doing it as I drove past, but couldn't find anywhere to stop to walk back and take photos.

This is still two way traffic until the new bridge and viaduct is finished at an additional estimated cost of £54.5 million. I have no idea of the completion date. 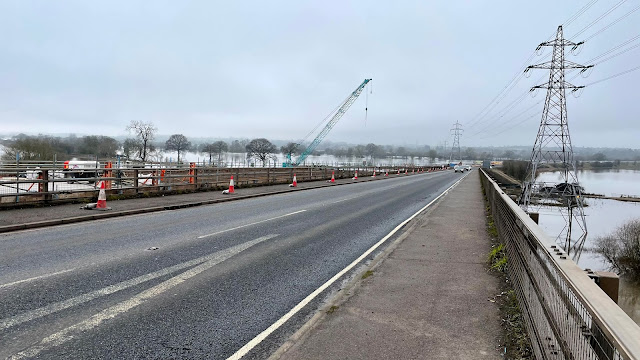 Carrington Bridge is only one of two bridges that crosses the River Severn in Worcestershire, the next nearest crossing is Upton upon Severn to the South and Stourport on Severn to the North.