Blogging for Madeleine Helping to raise awareness outside of the UK as requested by @theroomset
Please look very closely at these images do you recognise me? 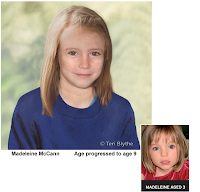 I'm writing this post as part of The campaign #blogging4madeleine
to help raise much needed awareness to find Madeleine and reunite a family torn apart.

Contact your local police force immediately if you see Madeleine
or call +44 (0)845 838 4699
www.findmadeleine.com

When i first saw the hashtag I was a little sceptical as to how #bloggingforMadeleine could help. I selfishly thought that this was just a gimic to bring traffic to people's blog or was it a one sided opinion of 'did the parents do it?' or 'how could they leave their children alone while they went out for dinner?'

But after reading a couple of posts it made me remember it's not about any one else, it's all about Madeleine.
What ever happened to her, whether she's dead or alive, whoever's fault it is or who is to blame she is a 9 year old girl who is missing.

My kids have all gone missing at some point...the eldest aged 2 wandered off at a car boot sale. I thought he was with my mum, she thought he was with me.
The middle son disappeared in San Francisco aged 12, there was so much for him to see. The youngest is the only one we've had to call the police out to...in France (was found under an ice cream sign) aged 4, in Abergavenny the following year when he ran off to find Fireman Sam and aged 8 on the beach in Perranporth.

I was petrified, I had images of never finding them, I was shaking, crying, shouting out their names. They were missing from between 5 minutes and 2 hours (Beach) the panic kicked in straight away each time. I was also scrutinised by the media as BBC sea side rescue were filming that day and followed me with a camera about 2inches from my face, they didn't use the footage as I didn't look distraught enough to make good TV viewing.

I read an article in Woman magazine, dated 7th may 2012. In which two journalists gave their opinion on whether it was time for Kate McCann to give up the search for Madeleine, after leading with the headline '74% of missing children are dead within 3 hours of abduction'

It's not their business, nor is it mine to pass judgement, but if it was my child, I don't think I'd rest until I had answers.

I met Kevin Wells, Holly Wells father (Soham Murders) at a Child Protection Conference a few years ago, even though he knew what had happened to his daughter and had the opportunity to say goodbye with a funeral, he still focused his whole life on preventing this from happening to anyone elses child.

You do what you need to do...I needed to write this and if you feel the same, please blog for Madeleine and help to raise awareness.
Posted by chickenruby at 23:08:00