Things to do in Monmouth South Wales.

There's a lot to do in Monmouth in South Wales. Since buying a flat here I n October 2016, I've been spending summer there, escaping the heat in my home town Dubai. 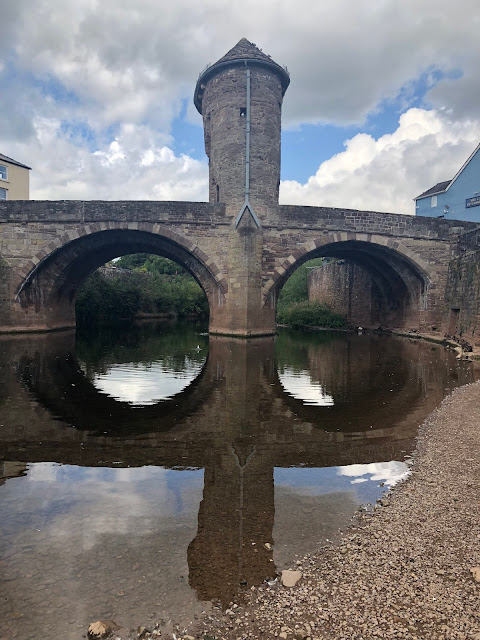 We chose Monmouth to put down UK roots as my parents lived there for 18 years, sadly my father died, but my mum has remained local. Monmouth has a population of around 9,000.

As well as being a pretty market town, Monmouth has good road links to the Forest of Dean, Ross-on-Wye for the M50/M5, the Wye Valley and Chepstow for the Severn bridge crossing to Bristol and Newport for the M4. There's a fairly decent local bus service and the National Express now stops there. 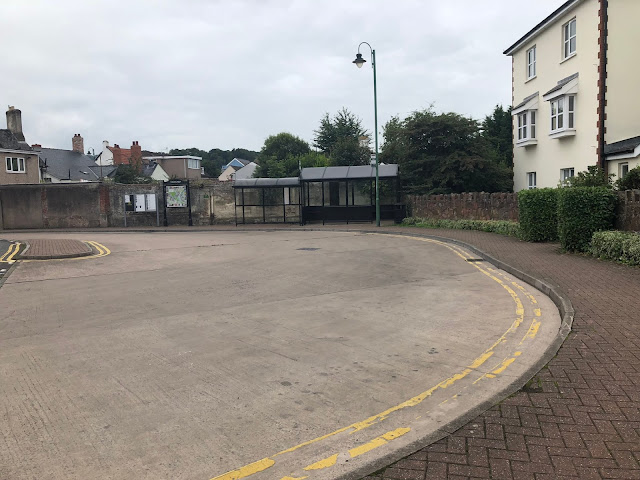 Entering Monmouth either by car brings you into either the top or the bottom of the town, with ample car parking both ends. Visitors usually favour the parking by Waitrose as it's easier to find. 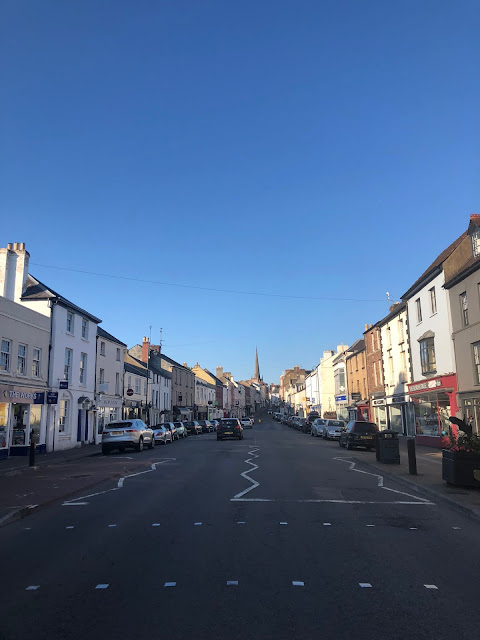 Monmouth is a pretty town, with its share of high street stores and an abundance of local shops and weekly market stalls. It also has its fair share of coffee and charity shops and pubs with accommodation and a newly opened Premier Inn.

I'm going to start my tour of Monmouth at the Medieval Monnow Bridge across the River Monnow. Monnow Bridge was still open to traffic up until early 2000's. It was erected in 1180 from stone, previously it was wood and the remnants remain today. 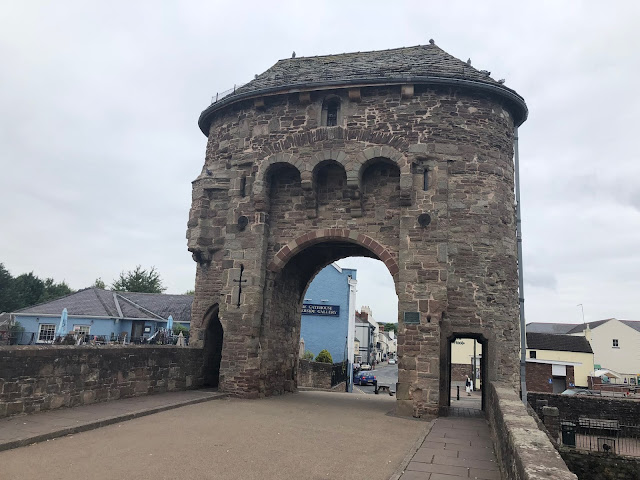 If you walk through the Gate and cross the round about to the left, you'll find this lovely little fairy door.

Located behind the Bridge is the Church of St Thomas the Martyr dating in parts from 1180, although the exterior was largely rebuilt in the 19th century. It is one of 24 buildings on the Monmouth heritage Trail, marked with blue plaques. 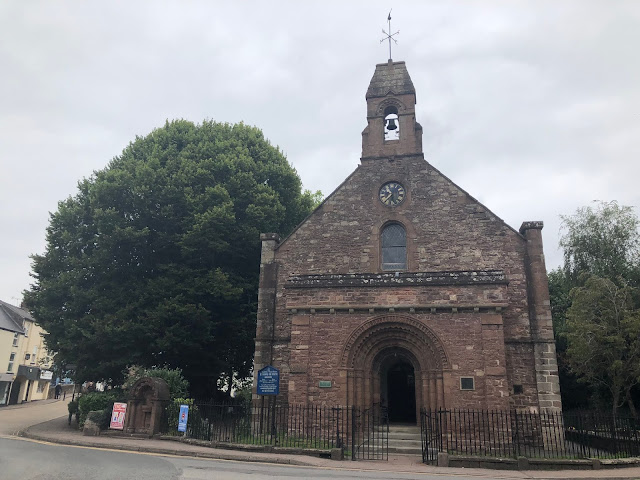 Looking up the town on the right are the public toilets with a wealth of literature about what is on in the town and outside the Robin Hood Pub is the information on the rest of Monmouth Heritage Trail. 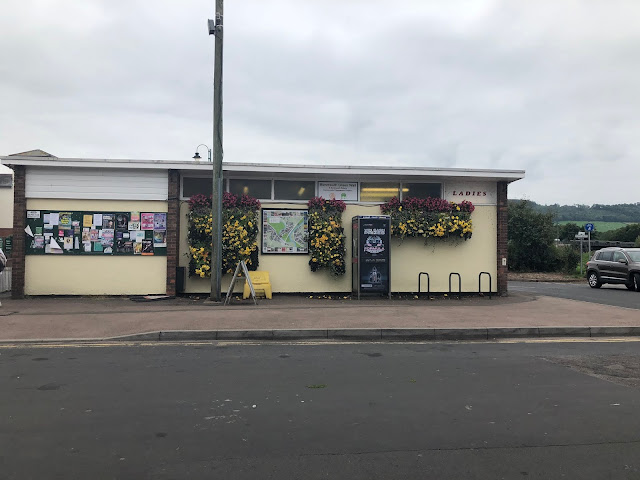 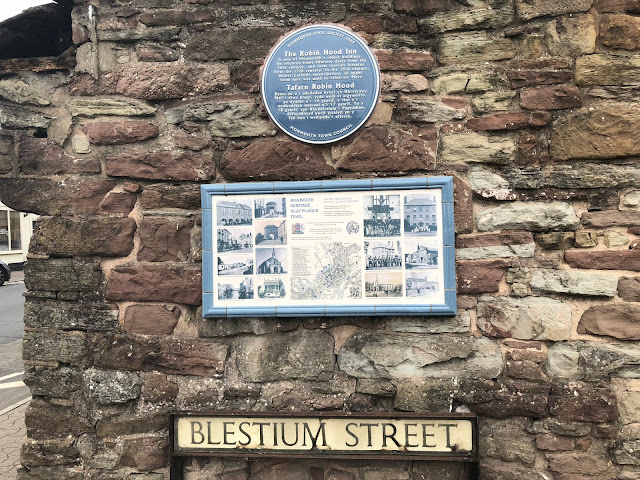 On a nice day, you can grab fish and chips and picnic by the river or follow the Monnow to where it meets the Wye, passing allotments and open space good for walking a dog in. 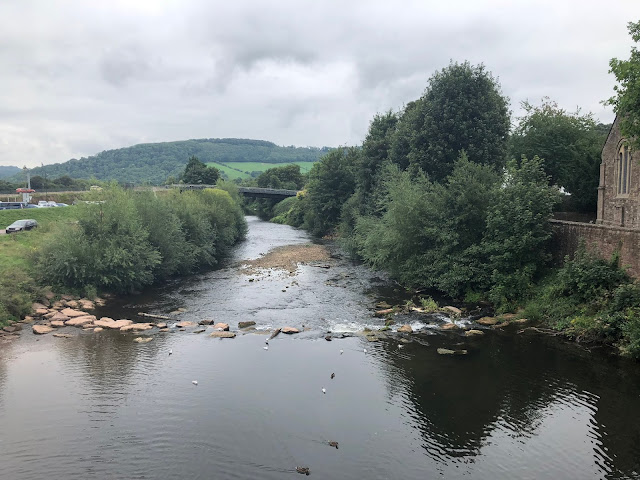 Alternatively at the back of Waitrose car park you'll find Chippenfield park with plenty of open space, shaded areas, benches, a children's park and the Nelson Gardens. There's a very strong connection with Lord/Admiral Nelson and Lady Hamilton here, despite only spending a few days here, in 1802, this is evidenced by the gardens, museum and the Kymin. Monmouth is also 35 miles from the sea as the crow flies, but the Royal Forest of Dean near by supplied timber for the battle against the Spanish Armada. 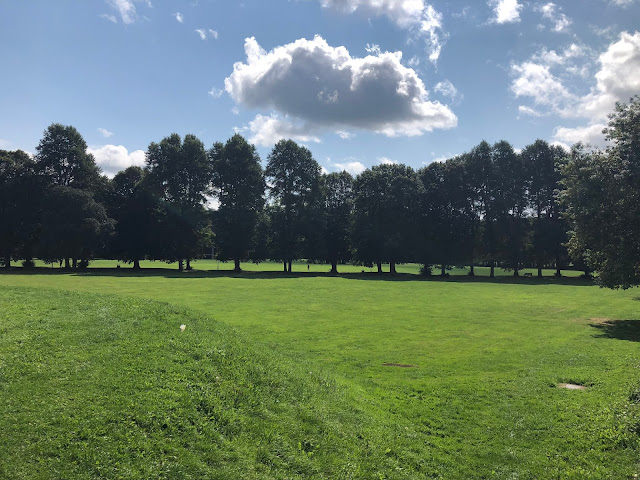 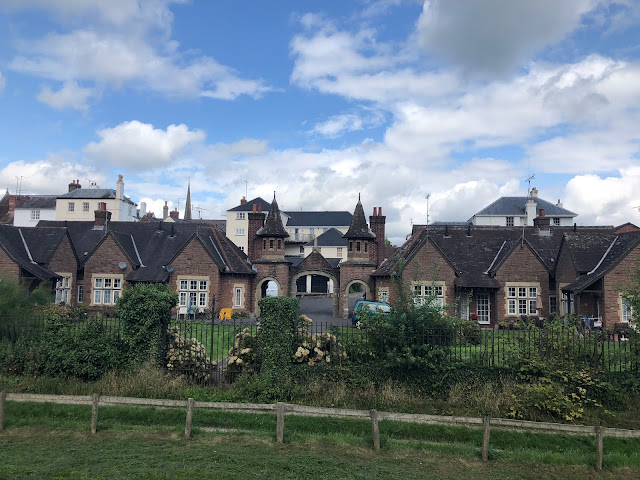 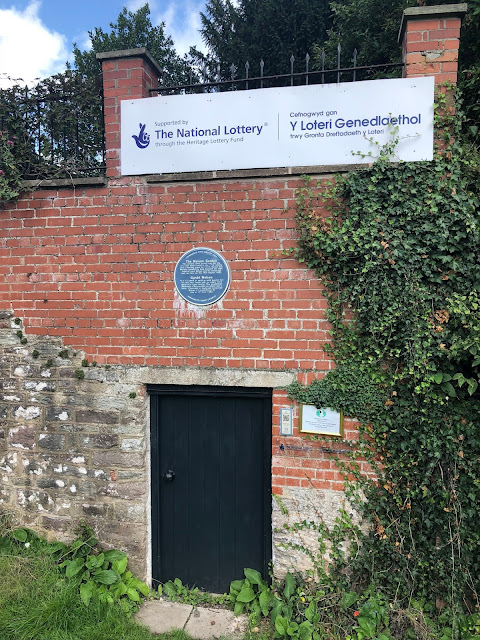 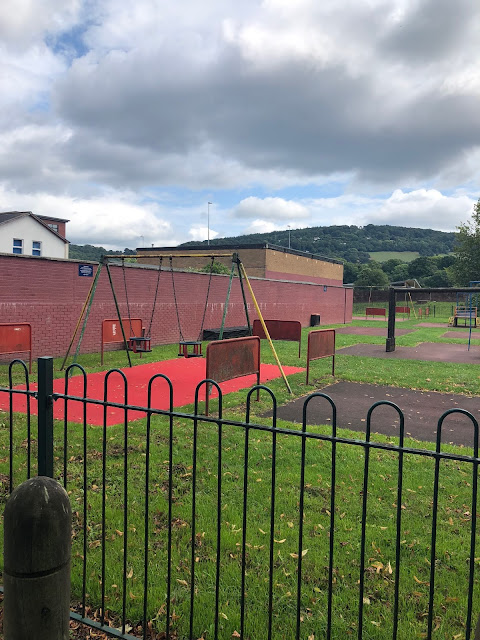 Take you time exploring Monmouth and the side streets, make sure you visit one of the many pubs in the town for food and drink. We prefer to visit the Estero Lounge near the coach station for food as it's reasonably priced and quality is ok when we meet up with family and friends and freshly cooked which is a bonus compared to the alternative chain in the town. It also has a secure garden, ample seating and is dog friendly, as are the coffee shops also.

There are some unusual style buildings in the town, which make it interesting to walk through, especially near the top where you'll find the Shire Hall located. 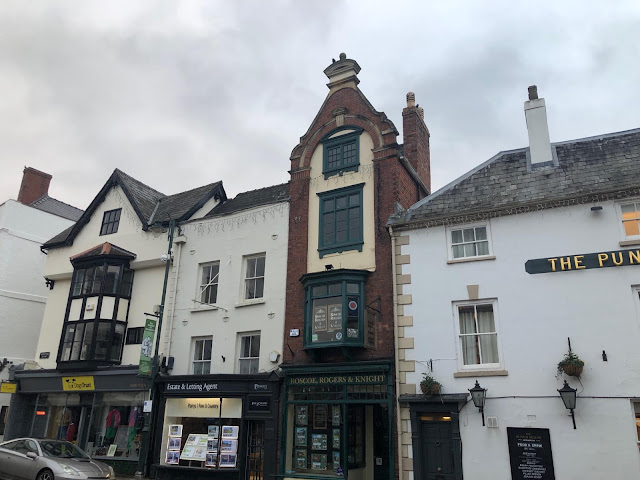 The Shire Hall in Agincourt Square is a Grade 1 listed building, built in 1724. Formally an Assize Court, it is now the Tourist Information Centre and offices for Monmouth Town Council. They also hold weddings there. 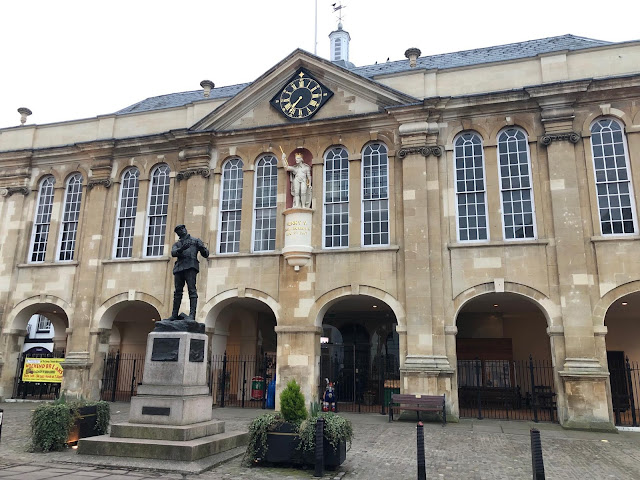 Monmouth is the birth place of  Charles Rolls of Rolls Royce. His statue can be found outside.

Just up the road and is Church Street. It is full of independent shops, restaurants and the Savoy Theatre. 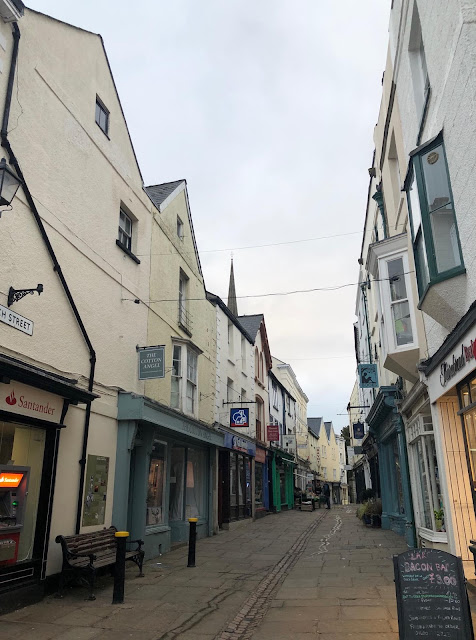 The Savoy Theatre was refurbished in 1928 and is a Grade 2 listed building retaining it's original features. It has been opened as a cinema since 1910 and was originally known as the Assembly Rooms constructed on the site on the Bell Inn. It was also briefly a roller skating rink at the end of the 19th century. 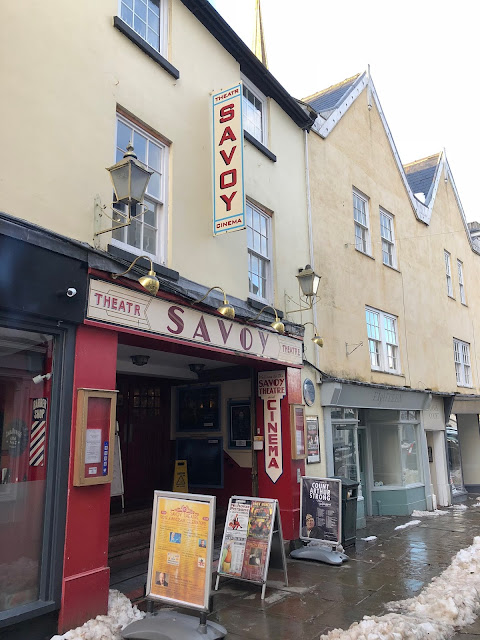 Next head up to St Mary's church  an Anglian  church founded as a Benedictine Priory in 1075. The current church dates mostly from the 18th and 19th centuries. 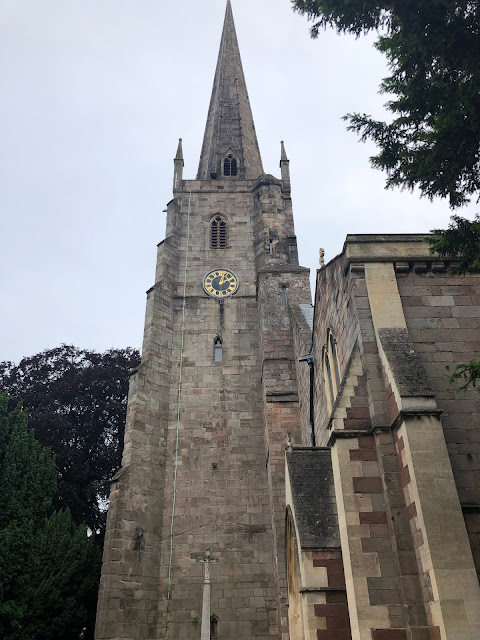 At  the eastern end of the churchyard,  is the gravestone of John Renie, his wife and two sons. Renie was a house painter who died in 1832 at the age of 33. It comprises a rectangular carved 285-letter acrostic puzzle. From the larger H on the centre square the sentence reads "Here lies John Renie" which may be read in any direction. 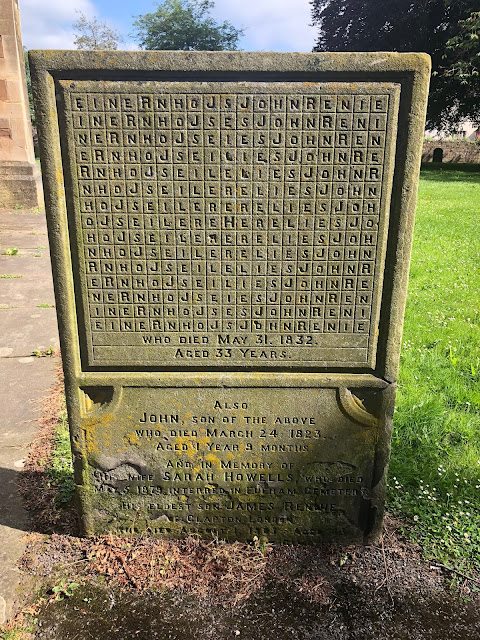 Exit the road side of the church and there's a slope leading you down to the caves, back up the steps and turn right into the Nelson museum.
Just past here back towards the town is Monmouth Castle and the regimental museum of the Royal Monmouthshire Royal Engineers. It is also the Birth Place of Henry V. 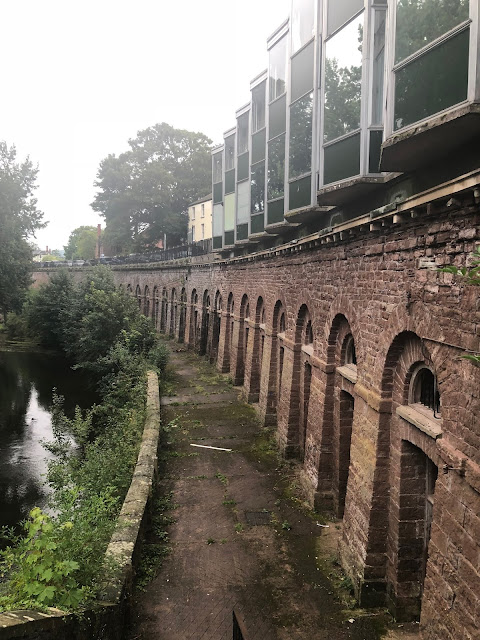 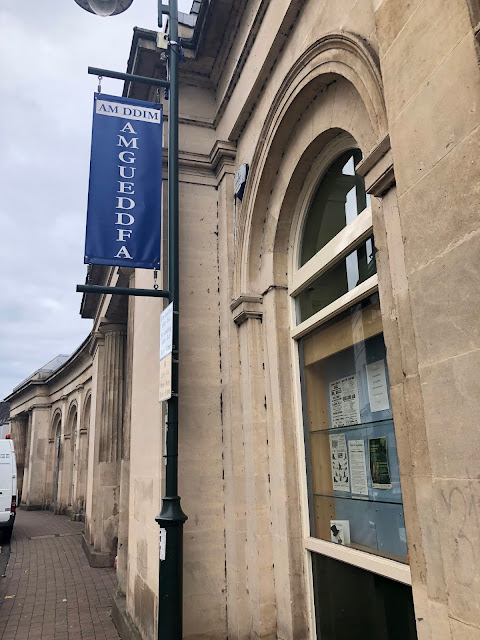 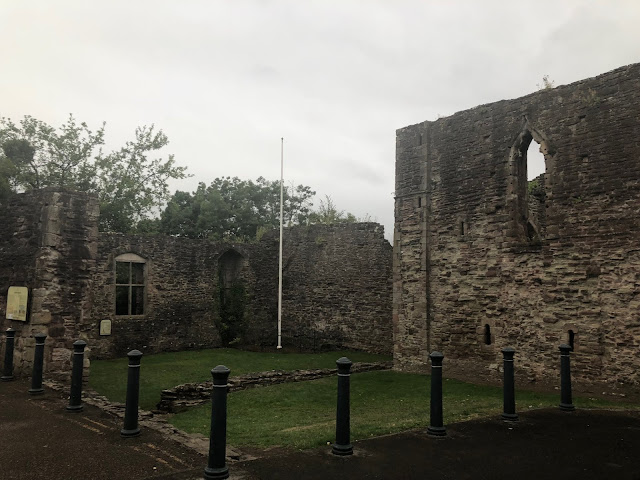 Head back towards the church, turn left at the traffic lights, left to Osbaston and visit the commonwealth graves, cross the road and follow the footbridge over the river Monnow, which leads you back into town. 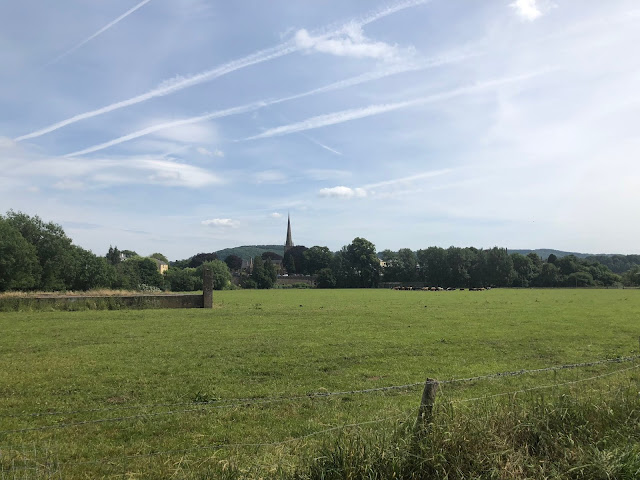 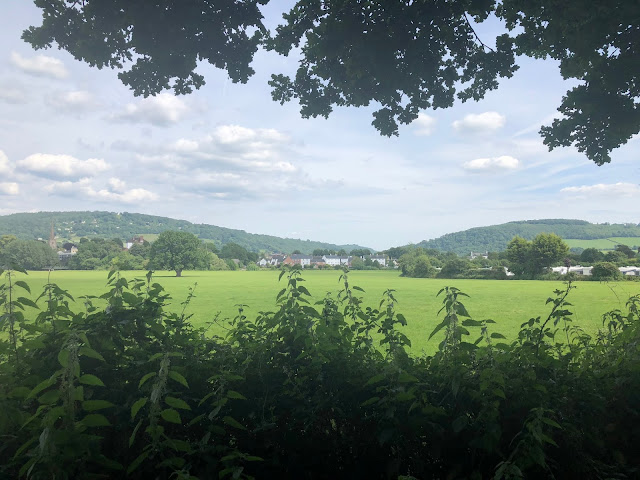 On your walk back to your starting point, the Monnow Bridge, you'll see Bridges day centre on the right, they offer a variety of activities here and I joined in with a keep fit class, it runs on a pay as you go system, which is good for short visits.There's also a newly opened swimming pool at the secondary school, Monmouth Leisure Centre and it has soft play also.

Monmouth has many events throughout the year, from music festivals, Friday markets, street carnival, agriculture shows, seasonal boot sales, craft fairs, flower festivals and so much more. Check out the events and dates at Visit Monmouthshire.