The cat is seriously overweight and no longer a girl

For 4 years Pushkins has been a girl, our little Pussy Fat Bitch is one of the more affectionate names we've had for her. 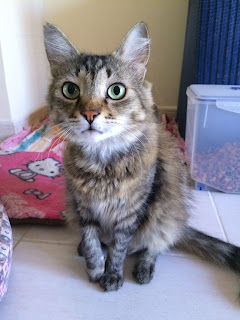 I'm a mother to 4 boys, the dog is male, so the cat helped to even numbers up a little. She has a pink cat basket, a pink studded collar, pink 'hello kitty' blanket, pink bed and pink food bowl. 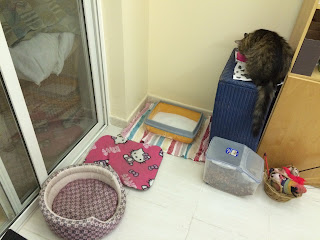 That still stays the same, as does her name, but from now on Pushkins is a he.

I'm gutted, it's like watching Birmingham City get relegated out the Premiership all over again, it has no effect on my life and it's just something I have to adjust to.

Pushkins is now 'it' if Peter or I say he, it just doesn't sound right and we think the other is referring to the dog.

I took her to the vets on Thursday as she had been limping for 2 days, the vet said at 5.2kg she was seriously overweight. It's not from us over feeding her, it's the cat feeding scheme that is nearby, she goes out at night and eats all the food. The only way to prevent this is to keep her indoors full time till we've addressed the weight limit.

The vet x-rayed her foot and said nothing was broken and gave her a painkilling injection and said her paw was swollen but there was nothing in it, so probably tendon damage and he gave me a course of tablets to give her at home. I have forced 2 tablets down 'its' throat and haven't been bitten or scratched yet. 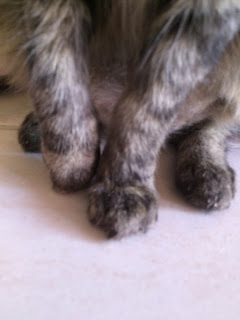 He handed her back over to me and said 'Pushkins is a boy' I was shocked, said 'she can't be, a vet in South Africa confirmed she'd been sterilised and the State vet had examined her before she boarded the plane in Johannesburg.'

The vet asked his colleague to examine her and confirmed SHE is indeed a HE and added 'oh the shame, a pink cat basket, make sure you break the news to him gently, at least you don't have to change the name, it suits boys and girls. But he has been neutered so we're NOT responsible for the cat population in Dubai.

Now I am considering a name change, no idea what yet, because Pushkins is what I called a girl cat.

I thought my husband would say I was being ridiculous, but he understands and suggested I bought a new collar and bed in blue to help me accept it and maybe find it easier to say HE.

Pushkins doesn't care, all HE cares about is being able to go outdoors. So far the litter tray contents has just been spread over the conservatory floor. During the day they both have access to the whole house, but at night we've taken to closing the conservatory door as Pushkins has been hand butting our bedroom door between 1am and 5am demanding to go outside. 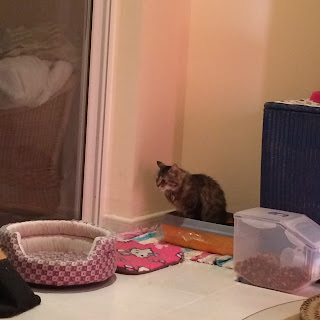 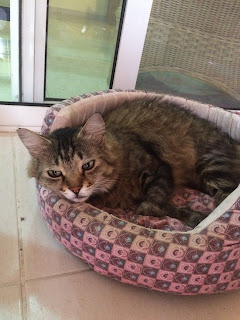 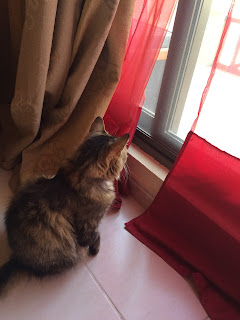 I was feeling guilty so I tried a harness and although he walked a little way in it, I ended up carrying him back indoors crying.