I love photo prompts, without them I'd probably just be uploading photo's of the cat and dog all week.

We've been fostering Clyde (bottom right) for the past two weekends, he's a pit bull mix and the brother of Bonnie, who we fostered for two weeks in June. Bonnie found her forever home and was adopted in Abu Dhabi, where she has settled into a loving family with another dog and 2 children.

Clyde is energetic and was neutered last week, we had him immediately after the surgery for a few days before returning him to kennels, but his kennel was too big and allowed him to jump around and he's not recovering from the surgery as well as we'd hoped for. Sadly this means Clyde has to be crated most of the day and night, where he can rest, we tag team our cat and dog to allow Clyde to spend some quiet time out of the crate with me in the house and the garden where he is calm.

Bob the Dog and Pushkins and the husband have been forced to bond with being restricted to the lounge when Clyde is out of his crate. The cat is as nervous as anything, but that's pretty much her normal state and has been able to spend the odd night outdoors now the weather is cooling.

Bob has enjoyed more time outdoors at the lakes in the desert and evening walks around the neighbourhood.

A couple paid a visit to meet Clyde, yesterday and I'm pleased to say they have offered him his forever home and left with him, for a two week trial in Abu Dhabi, with approval from DAWS, Dubai Animal Welfare Society. Sadly the trail failed after 24 hours, Clyde just wouldn't settle and became dominant and firmly in charge, so back to kennels for him now while we'll come up with a new plan. 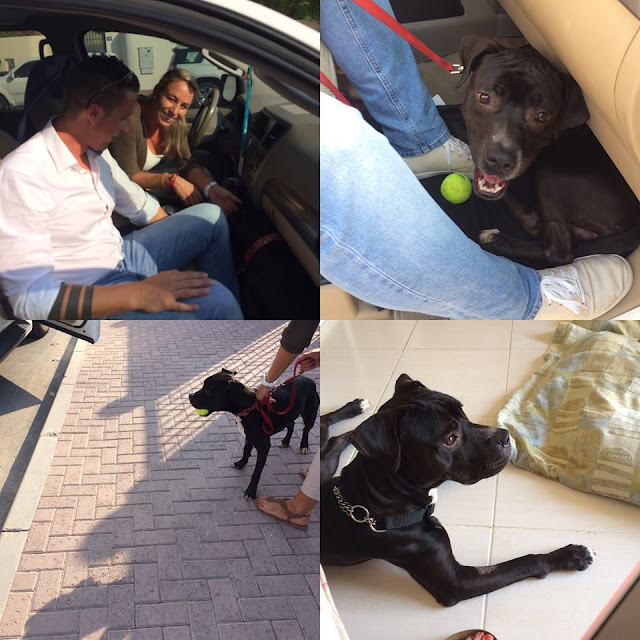 My next challenge is to spend the week driving around Dubai collecting donations of curtains, blankets, duvets and pillows etc to make dog beds for rescue dogs, like the one bottom left in the photo.