One Daily Positive - Week 28. When my dad died.

As we all know nothing in life ever really goes to plan, I've had a difficult few weeks with my health and the teen ending school, saying goodbye to child 4 before his deployment to the Middle East, then after a couple of days where things were looking up and I was preparing for the next emotional roller coaster of saying goodbye to child 3 before he emigrated to Australia, my Dad died.

This week has passed by in a blur. I didn't wash for 4 days, I slept at the flat, my mums, in a hotel as family came and went and I was accommodating everyone. I've food shopped and cooked, been out for coffee and after the first night after no sleep went out to buy my mum and dads usual numbers on the lottery.

There has been random crying over the littlest of things, there's been an awful lot of anger, swearing and why now? There's a lot of stuff I can't write, don't want to write, not bad stuff but time is already blurring events, some of it won't be pleasant to read, how he died etc, some things are for talking with family and close friends only, not everything is for blogging. 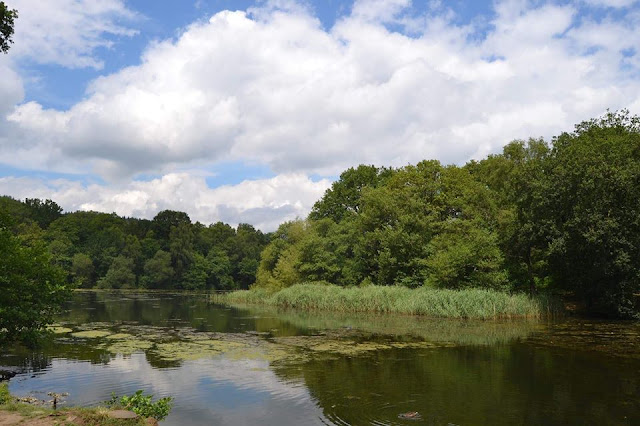 I met my mum and dad at the boot sale, decided the first one wasn't that good so drove to another one before heading off to the Speech House for coffee where we sat and chatted in the garden for over an hour. They went home and I popped in to visit an old friend and neighbour. I stopped off at Cannop Ponds to take a few pictures, nothing had changed since the times when I took my kids there as small children. I called in at my parents on my home, I can't remember why I did now. I spent the day with my sister in Cwmbran shopping and preparing for child 3 and 3a's farewell party on Friday and making some space in a one bed flat for all my son's stuff to be stored in, thankfully when child 5 finally gets a job and moves out, he'll be taking most of it with him as it's mainly kitchen ware, but there will be a suitcase and a set of golf clubs my son wants me to keep for a while yet till he decides what to do with them. I had some photo's printed for a frame I've been meaning to fill for a while and went out for coffee. I think I called in at my parents house, but I can't remember now and it's bugging me. 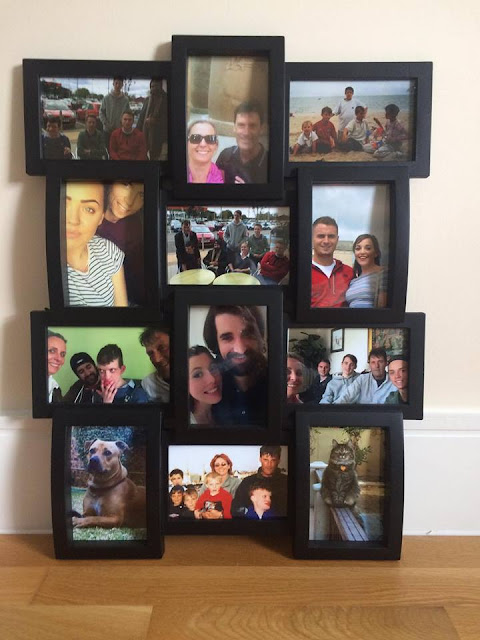 Started like any other day, except now I can't tell you what I actually did other than pop round to my parents to drop off some toy trains I'd picked up from the car boot for my great nephew around 4pm, the teen and I stayed till around 6pm. I cooked dinner back in the flat, went out to visit my friend for a couple of hours and around 9.30pm my sister rang to say my dad had collapsed and it wasn't looking good according to my mother. I grabbed my phone charger, told the teen to get dressed, grabbed clean underware, t shirt, toothbrush and my bag, prepared to spend the night at the local hospital, as my dad has been unwell for some time, or at the very least stay over night with my mum. When we arrived it was very clear my father wasn't going to make it, I called the ambulance back, my sister arrived, my mother got dressed, a paramedic arrived, we were ushered outside. I phoend my husband, I phoned a friend, there was 3 rapid response vehicles, a fire engine, 2 police cars, several neighbours. I have no idea of the time scale, at one point I collapsed, I gave a statement to the police, the undertakers arrived, a neighbour came round and then everyone was gone. My mother loaded the dishwasher around 3am, we went to bed, at 5am she was tidying up. I know at some point I rang my husband back and the 3 other boys to tell them that their granddad had died. 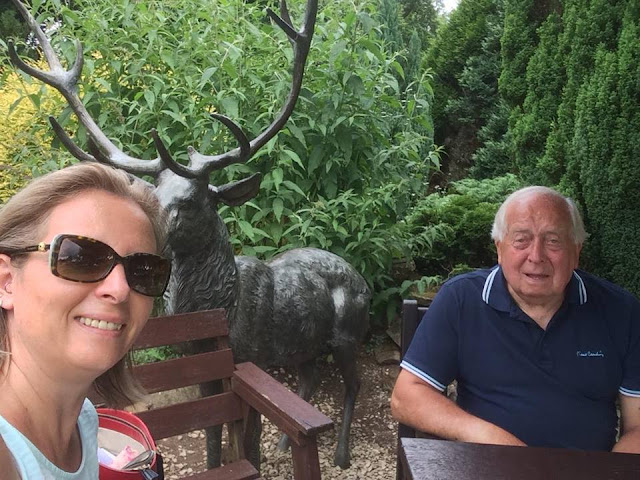 At 9am I was dispatched to fetch my mum and dad's lottery tickets and to do the food shopping, I was on auto pilot, I fetched coffee, I grabbed a change of clothes. At 3pm my nephew and I were at Cardiff airport collecting child 4, his deployment had been delayed, the army sent him home for the rest of the week. I ranted, shouted, swore and awful lot, I didn't sleep, but I went back to the flat as I had a migraine and left child 4 with his nanna for the night. I have no idea what anyone else did that day, other than make endless phone calls.

Thursday 194 Amaze. My dad used to moan at me all the time for being messy, so I left this here all night, because I could. 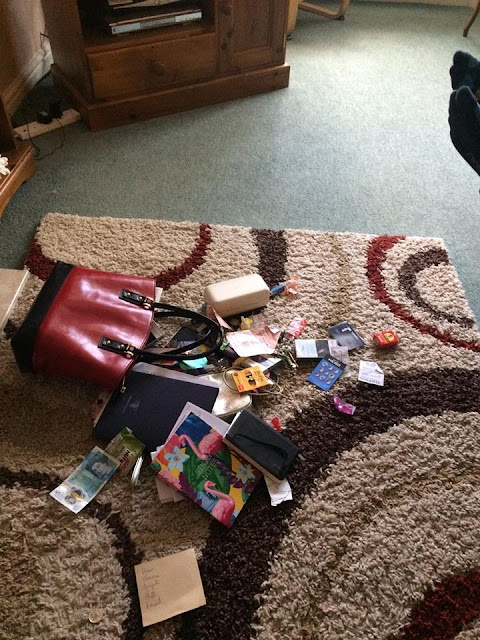 Apart from going to the funeral directors and booking the wake, I cooked a meal for 4 of us and at midnight I met child 3 and 3a at the flat who were down for the weekend anyway. I stayed at my mums. Child 5 sat an online test for the next round of interviews for an apprenticeship. He was at the house on Tuesday, I spent the first 24 hours focusing on my mum before realising I've actually lost my dad and finally remembered that it's not just me grieving, my children have lost their grandad too and need me also. I'm finding it all very difficult right now. Peter has booked a flight to arrive next week. Child 2 and 2a came down for the evening. 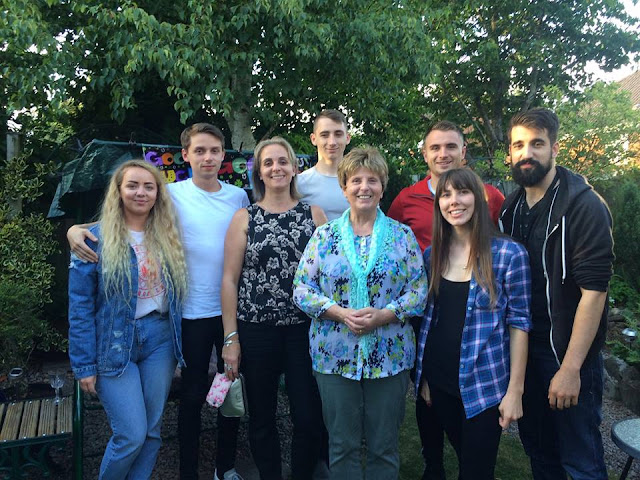 We decided to go ahead with the party, a few extra people were invited and the decorations for Australia were put up. I kept going on about an inflatable kangaroo I'd bought and that I didn't want all the food going to waste. We actually had a good time with everyone, it was really strange without my father here. I want a break from the house, I need some time away but I've nowhere to go, the flat is full of the kids. I realised I hadn't had a bath/shower since Tuesday morning, I'd misplaced my toothbrush and took myself off to a hotel for the night in town and I managed 8+ hours sleep. Child 4 stayed with my mum again.

Saturday 196 Drink. Dad had been saving this bottle of fizz for 25 years for a special occassion, it popped but had gone off. 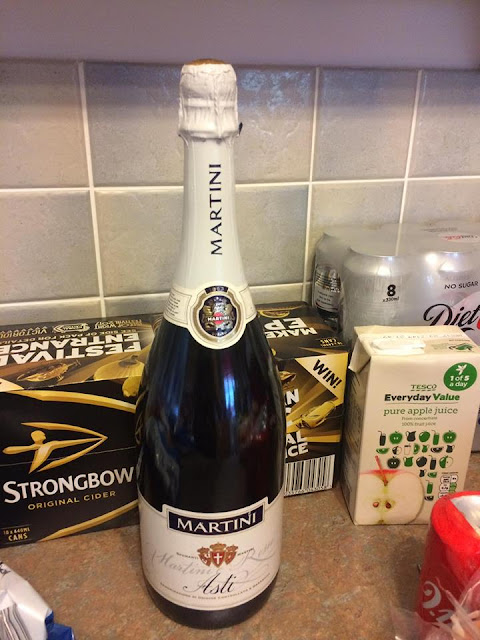 I had no idea what time it was when I woke, I dressed, left the hotel, got coffee at the BP garage and picked up the Daily Mail. My dad always bought it on a Saturday and it was a bone of contention between us. He would read the stories in there and get so wound up with the current state of affairs. I arrived at my mums to discover I was locked out and with nowhere to go I sat in the garden from 6-7am when she woke up to let me in. I read the paper, drank my coffee and replied to some of the lovely messages I've received from far and wide. I had a couple of hours out, had more coffee, tidied the flat, did a food shop and child 3 and 3a made a lasagna for dinner and a shepherd's pie for Sunday.
Peter and I have met 3a in Dubai in May, bless her, this was the first time she had met the rest of the family, what a way to be introduced to them all.

We've started going through the paperwork, we don't have a death certificate yet, we've had a fair few trips down memory lane, looking at his belongings, touching things we've never been allowed to look at, all under mother's supervision, going into the inner sanctums of the sheds, garage, snooker room and study, opening drawers and having a good mooch around things. We've all done what we've needed to do to help us process the grief we're all feeling.

Between us, my sister an I have 7 kids and my niece has 3 boys. It was always a full house, just sad that when we got round to filling it with us all at the same time, that my dad was missing from the action.

This is a Blog Hop!