My Sunday Photo - Week 139 M is for Memories

You can't keep everything when someone dies.

But with every item you sell, donate or chuck in the bin, you get rid of a memory, not your memories but someone else's. Someone who is not there anymore to share that memory with you, to tell you why they saved that newspaper, why that particular item was saved and stored in the attic and moved from house to house for 53 years of marriage. But it has to go, regardless of how upsetting it is to throw it away, they are someone else's memories, not yours.

My father was a collector of things, he attached great value to items that are of no value or worth to anyone else. There were stacks of newspapers in the attic. They had to go. The temptation is to keep them because they meant something to my father, therefore they mean something to his family, simply on the basis because they were his, but where do you store them and why do you keep them and what happens to them in the future? Do his great, great, great grandchildren end up inheriting a pile of newspapers because they were important to their great, great grandparents? It's the same with everything else.

The difficulty comes with knowing what maybe of personal or family interest or of actual value when someone dies. Fortunately my father was a great story teller and would tell us about things over and over again, there were some finds in the house amongst his belongings that have been a surprise to us, but asking around it would appear one or two of the family have been privy to a story that others haven't. My father had also labelled a lot of things over recent years, like his sporting trophies, with the name of the team he's played for at the time and had put smaller items into bags with a piece of paper with a brief story of where that item came from i.e. his father, mother, grandparents etc.

What surprised me when going through my father's belongings where just how many of my memories I found.

I spent the first few weeks feeling quite angry that all I could see was me in my father's belongings. Things I'd bought him, things I'd given him over the years. Like my father I've travelled extensively over the past 20 years. He travelled with his work in the mid 70's to mid 90's. I've travelled with my husband with his work and on my own and have lived in South Africa and Dubai. I'd visited many of the same countries, cities and tourist attractions, skyped my father from these locations, sent photo's bought back souvenirs and compared notes on how places had changed, the people the landscape, whether the countries were any safer to visit.

My father was an avid sportsman, playing professional football in the 50's/60's, then cricket, tennis, golf and finally taking up fishing in the later years of his life, but he loved to watch all sports. Mainly from his chair in the conservatory in the latter years. Peter and I and various children have attended sporting events all around the world, from golf tournaments in the UK, South Africa, Dubai. Football matches FA Cup finals, local derby's, England games. Rugby 7's in Hong Kong and Dubai and England at Ellis Park. Cricket in South Africa.

My father would tune in on the TV back at home, we'd update Mum via FB with our seats and he'd look out for us on the TV, more often than not spotting us live and recording it to show us on our next visit over and phoning us in the evening to ask about our day and question why I was always on my phone when the camera zoomed in on us on Match of the Day and not actually watching the football.

He kept all the programmes and tickets stubs and flags we saved from the events and brought back from our travels, the last one being the Rugby 7's in Hong Kong this April. These our my memories, we recycled them, took one last look through them and threw them away. 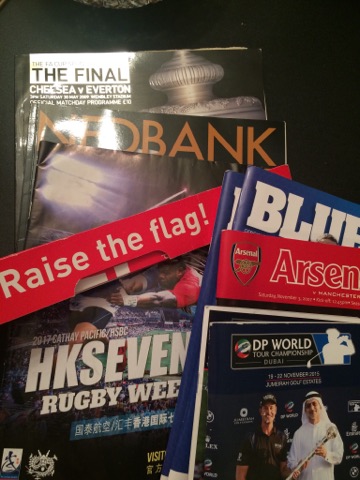 What we've kept that we're sorting through and putting in an album for future generations to keep are the football programmes and souvenirs from my fathers professional playing days. The one's where his name is listed as the goalkeeper, the newspaper cuttings he had kept from his school boy playing days at Newport Technical College, the team photo's, the letter from Joe Mercer, former England Manager, who called him up to play when he was manager at Aston Villa in 1960, but sadly my father missed the train that day, we're adding our own notes to each and every photo, letter, newspaper article with what he told us when he was alive and shared with us. His stories about the Munich Air Disaster, the players who survived that trip who he was friends with and went onto to play with at Cwmbran Town. His European playing days in Malta. The FA cup game against QPR. The footballer he played with who went on and won a world cup medal for his country. It's all being added bit by bit, put into date order and will be kept in a box under my bed, clearly labelled for the next generations to find. 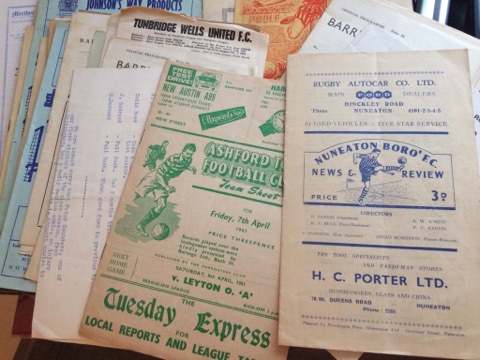