My Sunday Photo - Week 137 P is for Paraphernalia

Most of the stuff my Dad bought was from the Boot sales. Him and Mum loved spending their weekends mooching around them. Dad loved a bargain, he loved flea fairs, auctions, charity shops also. He loved to look at things that reminded him of his childhood, historical events etc. He loved to pick up toys for the kids, ornaments for the house, tools, items to supplement his hobbies, such as his fishing and golf.

Dad also loved a good moan and to pass comment. He'd complain about the prices of things and love it when he got a bargain.

Dad would find it very sad when people sold off stuff belonging to parents and grand parents after they had died and would often talk to me about the how important it was to him that we didn't just take all his stuff to a car boot, take collections apart and sell it all for next to nothing, that the value was in his collecting and not in the items. He'd tell me there were items that were worth a bit of money and to make sure we didn't get ripped off and to take our time selling things and if needed to pay for storage to allow us to do things properly.

Dad and I argued over this a lot. I'd tell him that what was of value to him wasn't of value to me and that he should start the process of selling his things and enjoying the money while he could and that I would rather he did that than inherit what I considered to be such a chore after his death. This upset him greatly. I often joked with him that I'd call house clearance in when he was on his death bed and the night he died, those words echoed around my head, those were not the last words I said to him, but those were the last words I thought about.

Sadly the reality is that today I was at a boot sale. He died 5 weeks ago this Tuesday. I was selling some of his stuff. His fishing gear is going off to a buyer tomorrow, someone is coming on Wednesday to look at his car and train collection, several trips have been made to the skip already, the shed is being sorted this afternoon, the attic later this week. The pool table, golf clubs and other sporting memorabilia is being sorted for sale, items are being sorted for flea markets and a few pieces for auction, the rest sadly is for the boot sale though. 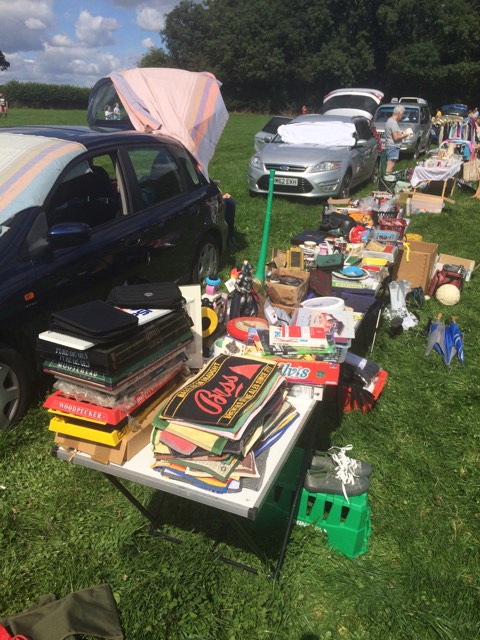