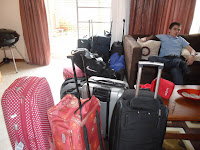 Passport control was a breeze, collected 3 trolleys, free of charge, 5 cases came off together and the other 4 weren’t far behind, straight through customs and greeted by HR. It was bloody hot out there and by now we were all a little smelly. A car had been hired us, with a boot big enough for hand luggage only, Peter was given instructions on where to meet us and he drove off with the boys, HR and I took the cases to her car, one slight mishap with the lifts with her going up and down floors several times while I waited for the next lift. Loaded the car drove to Peter then whisked off to Centurion via Wimpey’s for a food stop and several drinks before driving past the boys new school to our apartment, 3 beds, (1 en suite) bathroom and open plan kitchen, dining room and lounge and outdoor space, nicely decorated. A house keeper comes Monday and Thursday am to clean, change the bedding and towels. We were left alone and the tears came again…WTF are we doing? But we’re here now.
Decided to head to Centurion Mall to purchase some food and have a mooch round, we enquired about internet and mobile phones to discover we need 3 months bank statements, not to worry HR is sorting out the finance for us tomorrow. The woman at the internet store asked for our address so she could check coverage, I replied ‘No 60’, she said ‘No. 60 where?’ I don’t know…I know how to get there….lol.
So many things the same and so many are different, there’s Woolworths, more M&S quality, Body care, Fossil, Birthday’s the card shop and their own version of Primark called Mr Price. Culturally we text, a lift isn’t called an elevator and the sense of humour is good, customer service so far is far higher than the UK. Food in the super market is much higher than back home with a box of cereal costing £4 and toiletries are almost double, but then fuel is only 70p (ish) a litre. Why isn’t the word ‘ish’ in the English language dictionary yet?
We came back to the apartment, I drove, HR came round as Peter was preparing a salad and set up her laptop with the internet so the boys could face book and I sneaked in a quick tweet or two.
We drank wine, I sat in the garden and smoked looking at the moon, trying to work out which way is North so I could give you all a little wave. Kids settled into bed well, they have school tomorrow and we’re off to sort banks, phones and a car for me.
I’m now lying in bed, having unpacked and for the first time in over a month we’re not living out of suitcases. But this place is only temporary and next week I’m off house hunting so we’ll have to pack up again and move on.
Posted by chickenruby at 19:25:00