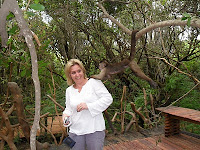 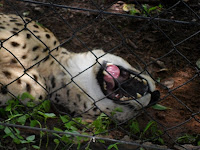 Day 4 23rd January
Armed with a rough idea of where we were going, no map, just a tour guide, we piled in the car with a picnic and headed West of Pretoria to find the Cheetah reserve. We got slightly lost and ended up in a town called Brits. This is how I thought the whole of South Africa would look like. Old fashioned, under developed, surrounded with town ships and then one large mall in the middle. As it was Sunday, everyone was at church, which in the area we were in was mainly Methodist. We found the Cheetah reserve, we needed to book in advance and as we weren’t able to go on the tour we wandered around the picnic area. The Cheetah in the picture, rolled over, purred and offered his tummy for a tickle. There was only that thin piece of wire fencing between me and him and if I had wanted to I could have given him a stroke.....However, I’m NOT stupid. The cost of this tour was £45 each so we decided we’d leave these sorts of things for when the visitors come.
We then drove down the road, following the brown signs to Bush babies Monkey Sanctuary. This was only £20 each and we had an hour’s guided tour through the ‘open’ enclosures. The monkeys were everywhere, in your trouser pockets, looking for things in your hair and giving it a good old tug, in people’s handbags and one monkey made several, failed, attempts to rip my earring from me.
We drove home via Hartbeespoort Dam, which is a hive of tourist activity, markets, and restaurants and down to Monte Casino for a birthday tea. A nice place, very Americanised, a sort of mini Vegas, built mainly for the people of Jo’burg to gamble on the weekends.
The only concern we had all day was when we were driving and saw a sign that warned of carjacking for the next 20kms, it was a windy country road with lots of shrubbery, trees etc where people could lurk. The speed limit of 80kms was ignored by all.
We spent the evening waiting till 9pm (7pm UK time) to make the Skype call home. Mum, Dad, Sister, BIL and Niece all sat round the computer. It was lovely to speak with everyone and actually see them. Far too much to talk about and questions to be answered. Internet here in SA is limited; they can’t believe that in the UK we pay a monthly fee with no limitations. Here we are restricted to 1G which limits Skype time, we’ve been advised not to use Google earth as it uses a lot of band width and I’ve un installed my beloved tweet deck for Twitter.
Posted by chickenruby at 19:30:00