The house is fantastic, ok it’s costing us a fortune in rent, but we ‘need’ the security and as I can’t work, why not live in a beautiful setting on a 18 hole golf course, where I can go for a walk in complete safety. I ‘need’ the pool (more of a big bath really) and the steam room and all this space...we could never afford this standard of living in the UK and why not?...we may be here forever, we may decide to go home, we may move somewhere else in a few years...who knows? 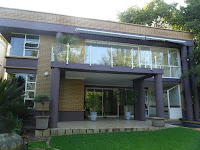 We live a 10 minute drive from Rietvlei, http://www.rietvlei-reserve.co.za/index.php?loc=rietvlei_game a small game reserve by South African standards, more of a park really, but bigger than Longleat and it’s not manmade, it’s the animal’s natural habitat. There are Lions, Rhinos and Zebras as well as the Sneezy things, as my son named them when he came to visit, seems like they’re all allergic to the grass...think they’re called Spring Boks. 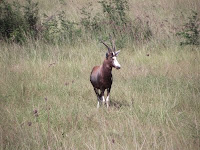 45 Minutes further down the road is Krugersdorp Game Reserve and the Lion Park http://www.sa-venues.com/game-reserves/ga_krugersdorp.htm...we go there on Sunday mornings as that’s when they feed the lions. They have Elands and similar animals that have died of natural causes chained to a post to stop the Lions dragging their food away so the tourists can see and take photos. The Lions are docile after feeding but if they do approach your car you need to keep moving as they have a habit of chewing your tyres and you don’t want to be changing a wheel out there. 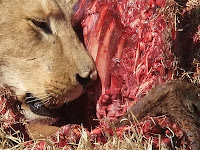 Pilanesberg Game reserve http://pilanesberggamereserve.com/index.html is a 2 hour drive away north west of Pretoria, that’s where you get to see all the ‘big 5’
The Elephants were amazing, a herd of approximately 20, stood no further away than the length of a football pitch, unfortunately one of them decided it liked the look of our car and started to approach us on the road...there was nothing we could do...we couldn’t go forwards as the elephant was blocking our view, so we indicated to the car behind to reverse, who indicated to the car behind him, who indicated to the car behind him and so on.....it took ages before we were able to reverse away, to discover that the end car about 7 back was in fact actually a car and not a 4x4 like the rest of us and the road was actually a track full of deep holes and they had trouble getting out...a fair amount of panic from parents but I’m quite calm in these types of situations as is Peter...we had no control over the situation. 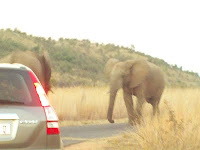 Two weeks earlier I spotted a Leopard at dusk and despite the warnings, yes, I sort of got out the car to take a photo and get a better look...good job its mate didn’t sneak up behind me...he was less than 20ft away. 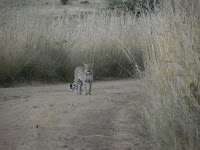 The remaining two animals are the Rhino and Buffalo and I’ve seen them many times, in fact in each park on every occasion in the case of the rhino. 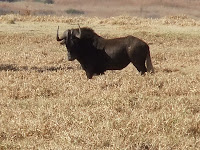 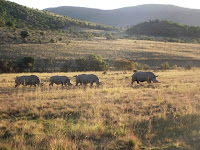 I could get used to this...I am used to this... there’s another weekend ahead and the picnic will be made and the camping stove with tea and coffee facilities will be packed and off we go...

Do you know what my neighbour said when I told him that I’d seen the ‘big 5’ in 3 separate visits within 5 months?...
Suzanne...This is Africa
Posted by chickenruby at 01:27:00