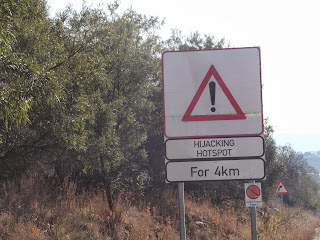 Apart from a bit of driving across Europe and a road trip on the west coast of America I’ve only ever driven on the left hand side of the road. On arrival in South Africa it was one of those things that I never gave any consideration to and was pleasantly surprised to discover they drove the same side as us in the UK. Make sure if you have a foreign licence it's translated into English.


The speed limit in SA is 120km and there are fixed and portable cameras everywhere. We’ve all had speeding fines now, caught on camera and the advice is ‘don’t pay it’ well we ignore the advice and have paid all 3. There’s a  50% reduction if you pay within 32 days but it usually takes 2-3 months before you receive your notification and we just pay the 50%.


I’d strongly advise that if you get stopped by police with a mobile camera you accept the fine and follow the instructions for payment. Apparently you can just bribe a police man and he’ll make it go away, I’d strongly advise you don’t do this. Everyone who tells you that, when pushed further, will admit they’ve never offered a bribe, but a friend of the friend’s cat told them about it.


The rules of the road are similar, keep left, and pass right, the use of mobile phones whilst driving is illegal. These are ignored by most, people weave frequently in the traffic and I’m afraid to say I also do this, usually to avoid crashing into the back of a stationary vehicle in the outside lane.


There are no official rules about vehicle maintenance and the only time a car is required to have one is at point of sale. There are too many vehicles on the roads without working lights, wipers, indicators and bald tyres. Accidents are frequent and can involve numerous deaths in double figures.
Sights like this are common and it’s usually the sheer volume of people in the back that prevent them falling out. 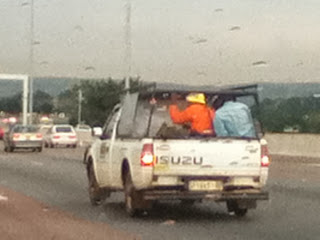 Navigation is via GPS, people often give out GPS coordinates which rarely reflect their actual physical address and can take you through townships and off road rather than around, so always check the route before you travel. The first journey I made with the GPS it yelled ‘warning’ and displayed a picture of skull and crossbones at the junction. At areas of hijacking risks, police will sit in their cars with lights flashing as a deterrent. Police also drive with their blue light on which I still find confusing. Driving past townships in the day light is safer although best to avoid 1st thing in the morning and late afternoon, this is because of the number of taxi’s (mini buses) probably the most unsafe vehicle on the roads ,due to as I mentioned before, no road vehicle checks.


People here navigate by road names not a letter and number apart from the national Roads, N1, N2, N3 etc. The Municipality roads are known by their names and have recently under gone a name change in Pretoria, making it a constant adjustment for me, when people give me directions.


There’s no public transport in Gauteng apart from the Gautrain and the local buses that service the station, the first time I went to use it I discovered I had to have a card and have it pre loaded, similar to an oyster card, no cash is taken on the journey, you just scan in and out. It was very expensive and took me far longer to get to the airport than the car would’ve, plus valet parking at the airport is exceptional value.


One of my favourite things about driving here are the storms and the power outages. This often means the robots aren’t working. Robots are traffic lights and work slightly differently to what I’m used to. They change from red straight to green, missing out the amber light. When there is a power outage and the lights fail as they do often, the roads turn into 4 way stops, please note most people treat roundabouts and traffic circles as a 4 way stop and at busy times of the day OUTsurance manage the flow of traffic.


It’s always best to do your windows up at the lights and 4 way stops, not so much to do with safety but to stop endless people selling you useless items and begging for money and food. I like to put my sun glasses on and remain aloof. Try not to fall for the classic trick when someone points at the front of your car and you open your window to hear what they’re saying, before you know it a Hello kitty sunshade will be thrust upon you.


I drive at night, but it’s not something I’d recommend you doing unless you know the area well and stick to the main roads, even if it does take slightly longer. You must stop at a red light at night, if you feel unsafe and have checked the road is clear, and then proceed but you will need to prove you felt unsafe if you get a ticket. People told me after 11pm I can ignore the red lights and drive straight through, but again they got this info from a friend of their cat.


Don’t stop to pick anyone up or to help anyone who has broken down, this can be tricks used in hijacking. A few weeks ago a guy tried to flag me down, I swerved and drove past. I drove straight into a high jacking and shooting that had gone wrong, the police turned me round fairly quickly.
Don't forget to stay in your car at the fuel pump. They fill your car for you as apparently it's not safe to do it yourself. 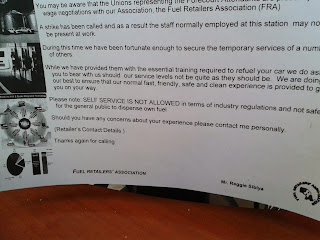