Fight or Flight? What would you do? 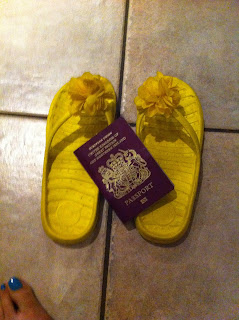 I wrote a blog post which was published on Monday about How safe is South Africa?

I always said I would I would run the opposite direction and I'd let a thief take what they wanted to, to protect myself, but until you're actually put in that situation you really don't know what you'd do.

I fought back, I chased a thief.

MIL arrived from the UK this morning. We sat and drank coffee while waiting for hubbies flight from Dubai, which landed an hour later. We walked down to the parking lot, paid for the ticket and as we opened the boot a guy insisted on helping us with our luggage. We told him no, but he grabbed the cases and put them in the car, then he started rearranging the cases. I told him no more and gave him R5 to go away.

We closed the boot and got into the car, but something stopped me, made me check the boot.

My first thought was he had marked the car and was going to phone ahead to hijackers, to intercept us on our way out of the airport.
Then I noticed hubbies hand luggage case was unzipped on the side. I asked hubby if he had his passport, he said it was in the side pocket of his hand luggage.

As I closed the boot and looked towards where the man had gone, I saw him start to run. I yelled at hubby, 'he's stolen your passport' and before he could get out of the car, I'd taken chase.

I ran up the escalator, looked left and right and saw him at the top of the next escalator, I ran after him, out the door, across the 2 roads, towards the long stay car park and the hotels.

For a split second I thought about running into the police station, but I really didn't want to lose him and go through the hassle of replacing a passport.

As I caught up with him I grabbed him on the shoulder and yelled 'Give me my f***ing passport back, NOW'

He removed it from his jacket pocket and said he'd found it on the floor. I snatched the passport and yelled 'you f***ing liar, you stole it' and turned and ran to the police station.

It was only as I entered the building that fear spread over me like a big wave. He could've had a gun, this is South Africa, Johannesburg.

I had no control over my behaviour. I fought, it was a natural instinct, one that I will have to learn to supress.

If the incident was captured on CCTV it'll look like I was the one who committed the crime. I was so bloody angry.
Posted by chickenruby at 00:17:00