After a rubbish 2 weeks with a bad back and yes I know you're probably sick of hearing about it as much as I'm physically sick with the pain, the week ended on a high for me after finding a dog socialising group on face book, who meet out at the lakes in the desert on Friday's between 7-9am and Saturday's 5-7pm.

When we moved to South Africa, it took me nearly a year to feel like I'd settled in and then things were hit and miss for a bit longer until I established myself with voluntary work. With the kids being 11 and 15 when we moved, they were more independent and I wasn't needed at the school gate, in fact the boys requested I stayed firmly in the car, they were one of a handful of foreigners at their school and felt that they stood out enough with mum getting involved at the school and with most of the parents speaking Afrikaans to one another I wasn't really going to fit in there.

However with the move to Dubai, things have been quicker, it hasn't been any easier, it's just been quicker and that's due to me using social network more, having free wifi when out and about and of course being a safe city to go and about on my own and explore in.

I've met quite a few people online and meet regular for coffee. I also chat to people daily when out and about. Dubai is a country full of expats with only 21% of the population being Emirates. Everyone else is in the same situation as you are so more friendly and chatty.

We rescued Bob 2 years into our stay in South Africa and on our move to Dubai we discovered that it's less of a dog friendly place than South Africa was and dogs have to be kept on a lead all the time and are banned from the beach.

I've been out to the desert twice now with Bob, Friday with hubby and yesterday on my own, hubby is now in the States for 2 weeks, to meet up with other dogs and their owners, make friends and for both humans and dogs to socialise.

My photo was taken yesterday and sums up how I am feeling at the moment. Happy. 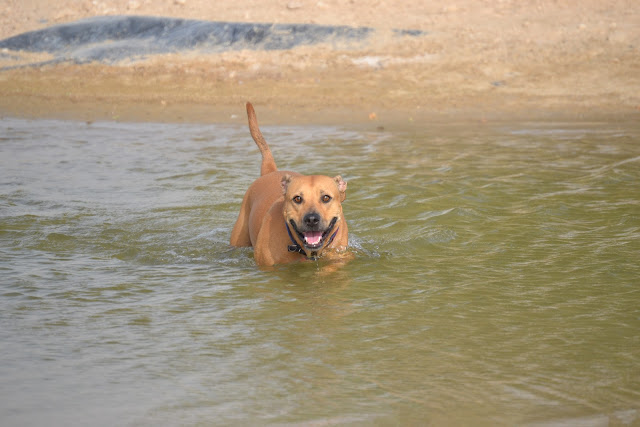