The RHS Malvern Spring Festival was a couple of weeks ago and I seriously considered extending my stay in the UK to visit. The last time we went was in 2010, prior to moving abroad, in fact we would go to the Summer and Autumn shows also. As we lived in Malvern, we'd have family to visit for the weekend so we could all attend the show together.

Joining in with Time Traveller and How Does Your Garden Grow, I've been trawling through old photo's to revisit some family days out, holidays and events.

Our youngest son was a student at The Downs, Malvern College Prep, where you can find The Downs Light Railway, the world's oldest private miniature railway. It is one of only two railways in the United Kingdom to be operated and maintained by children.

The school were fortunate (some serious fundraising required) to showcase their gardening skills and the DLR at the 2008 RHS Malvern Spring Festival.

They won a Gold medal for their show garden 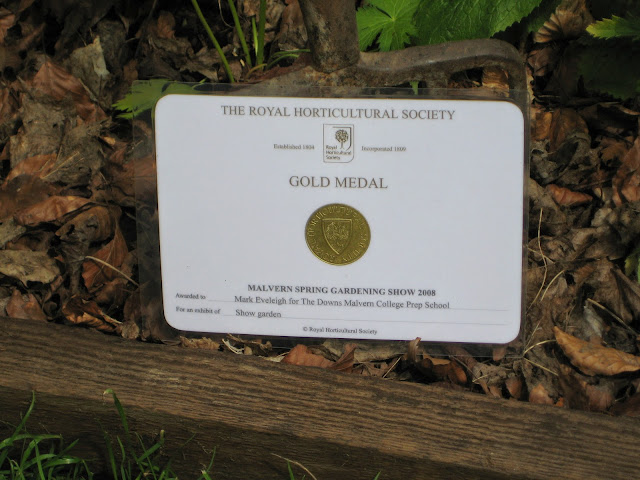 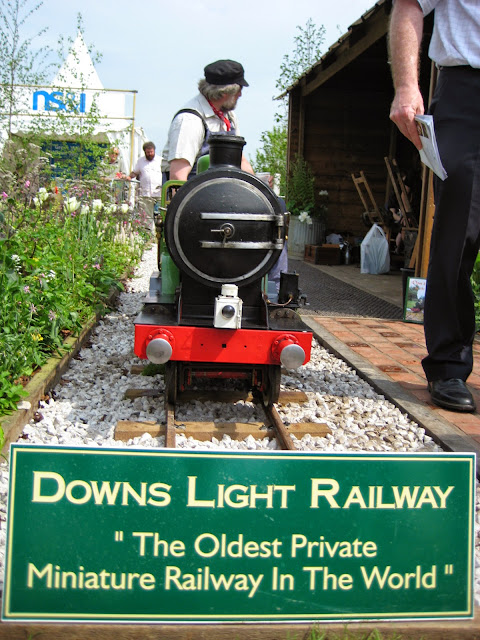 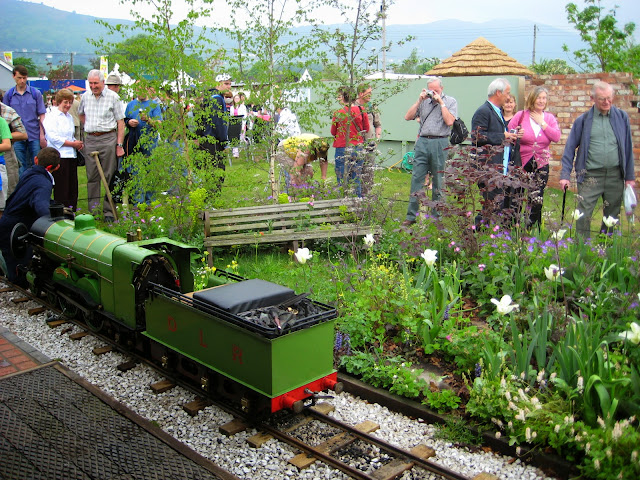 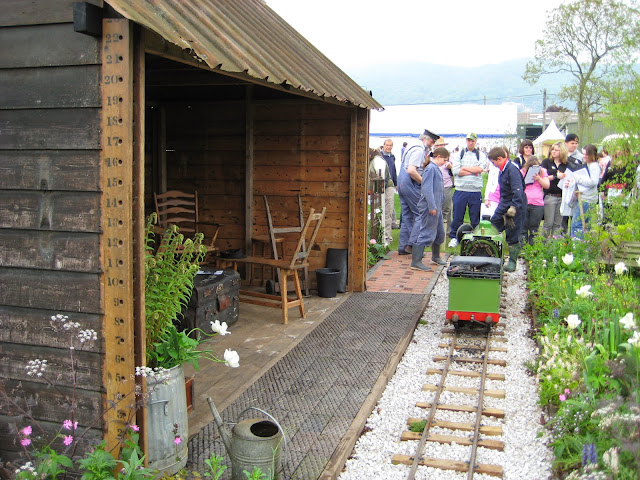 The Summer show is the called The Three Counties and it always falls on Father's Day weekend which is also the same time as my Mother's birthday. It was always hit and miss with the weather, but with so many marquees, food halls and animal sheds there is always somewhere to shelter and typically there is plenty of wet weather gear on sale if you happen to forget to bring your own.

We usually took a picnic and chairs and set a time when we'd all meet back at the car, but would ask for the back of our hands to be stamped on returning to the car park so we could save the hassle of carrying tables, chairs and cool boxes with us. 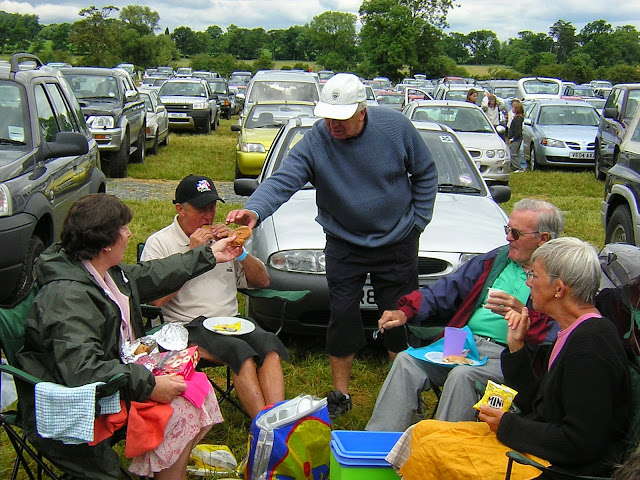 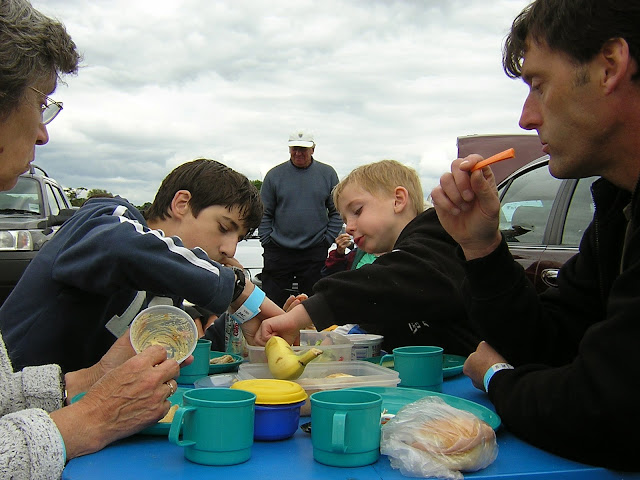 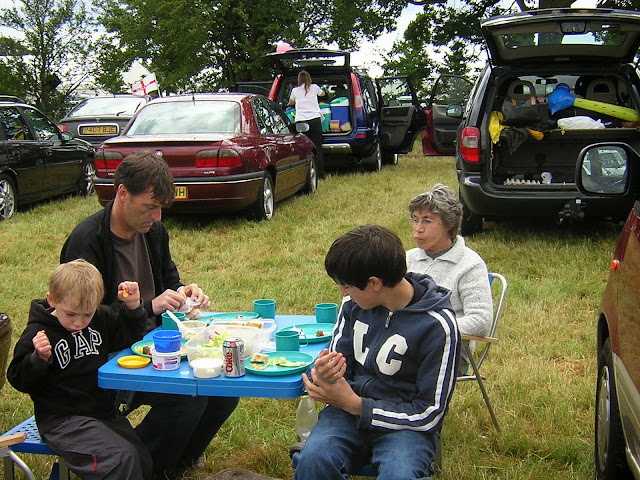 It's a typically British thing to do, picnic by the car but with views like this, who cares? 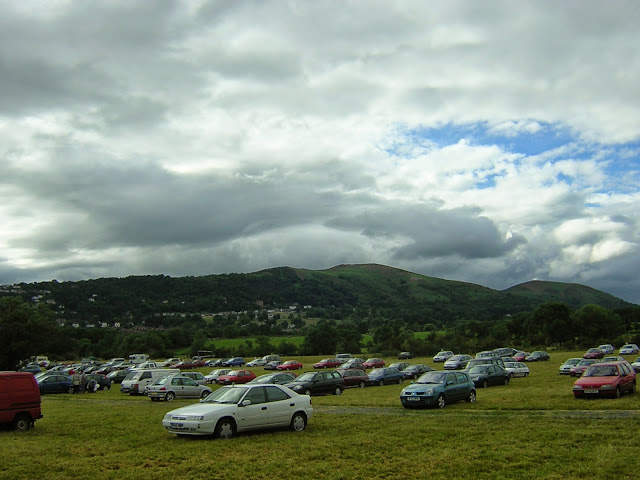 With plenty of shopping, animals, displays and entertainment, there's enough to keep everyone busy and happy for the day. 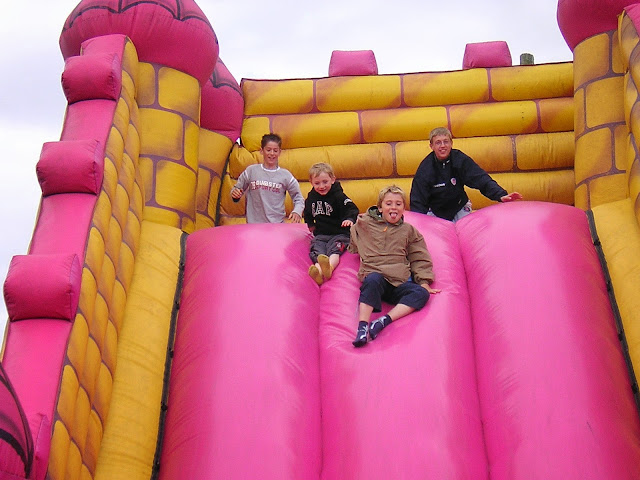 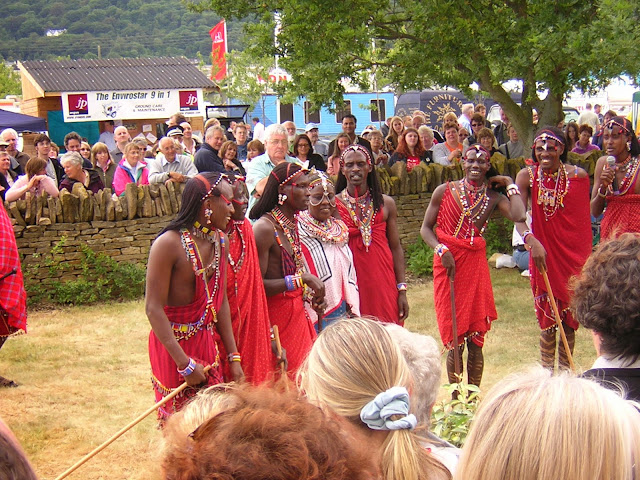 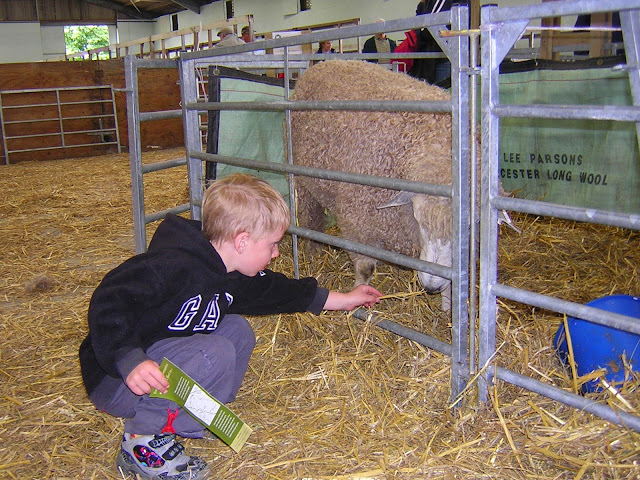 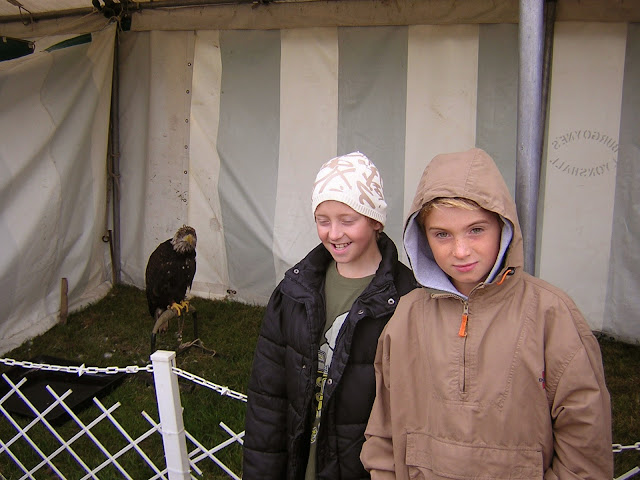 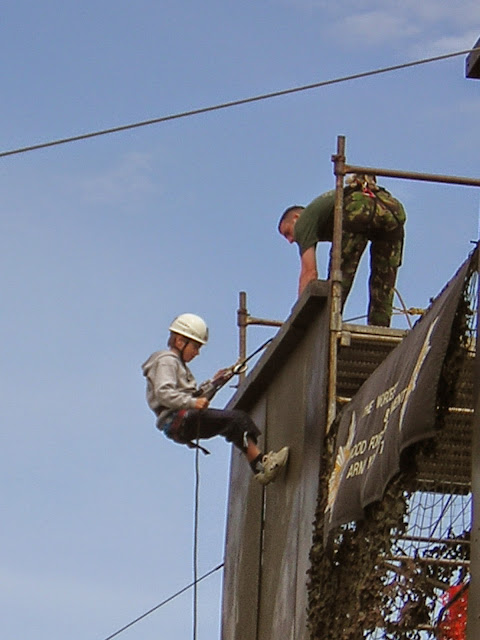 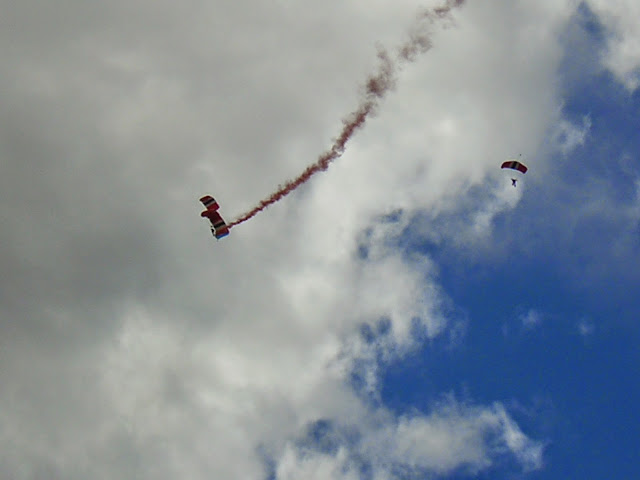 So having linked up with Time Traveller and HDYGG? I thought I should update you on the current travel arrangements and add some photo's to HDYGG and how we've resolved a few issues with our 'Creating a garden in the desert'

The recycled water containers have been a disaster, they retain the water which reaches almost boiling point during the day and when I cut some drainage holes, the soil dried up, the bottles stink and are too heavy to move and the tomato plants have been in direct sunlight for 6+ hours a day and are struggling. So I made some new newspaper pots and planted some new seeds, just in case the plants don't survive now that we've rehoused the tomatoes under some shade netting at the back of the house.

The pump to the right of the orange boxes is for the bore hole, although hubby managed to get the pump working, sadly the bore hole was empty. 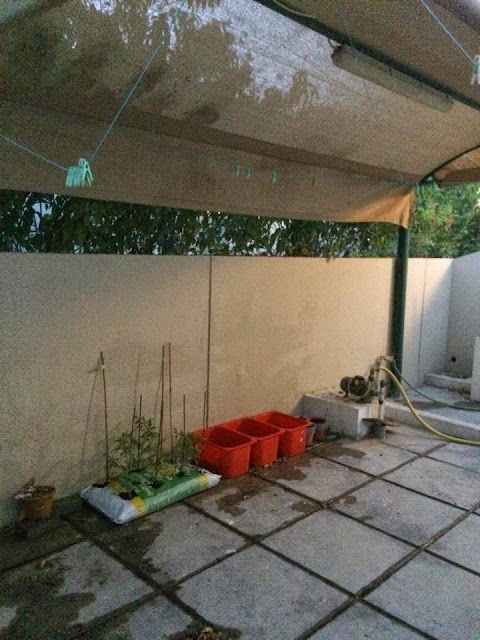 Hubby is off to Turkey in 2 days, back Wednesday then off to the States on Saturday, returning 2 weeks later and only 5 days before I fly to Canada for 3 weeks. His trip is business and he flys business class, mine is holiday and I fly economy.

We are now down from 4 to 1 working suitcase and I'm an advanced packer, hubby is also a lazy unpacker as in rather than unpack and put clothes away on his return he lives out his suitcase until it is empty. I'm starting to stress about not being able to pack my case in my time scale so may have to purchase another one before I travel. Seeing as he's flying business, I'm hiding the eye mask and travel pillow from him as he has a habit of leaving them behind on the plane and I'm really going to need them for my 13 hour flight from Dubai to Toronto. 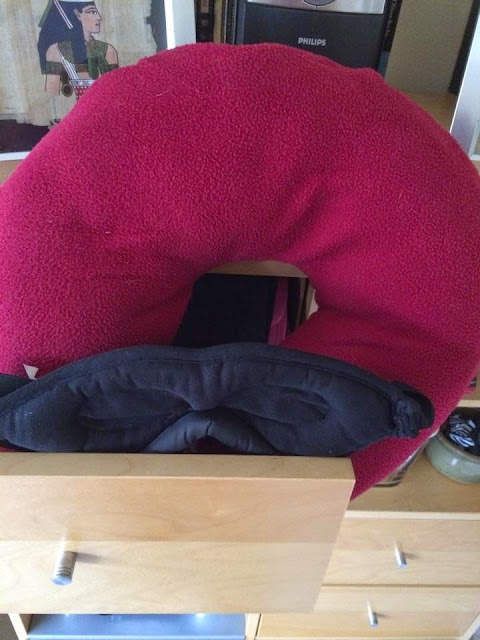 Plus I'm also having an unexpected and surprise visit from child 4 of 5 who is calling in to see Mum in Dubai for 4 days on his way back to the UK after visiting his old friends in South Africa.

When I return from Canada child 5 of 5 will be here after his GCSE's until the beginning of September. Hubby is then off to Europe end of August, I then have friends making a quick stop over from South Africa on their way to Europe, and then I'm meeting up with hubby in the UK for a 2 week tour of Yorkshire where children 3 & 4 live then down to Gloucestershire to see parents, siblings, nieces, nephews, great nephews (niece's 2nd baby due August) and children 1, 2 & 5.

In October and November I'm returning to South Africa to work with 2 charities that have been close to my heart for nearly 5 years, I need to start the ball rolling with fundraising for educational and sanitary supplies, so any and every idea welcomed. My mother then comes to visit in december finishing off a very hectic year of travel and relocation from South Africa to Dubai.

Don't worry I haven't left Animal Tales out of all of this as the cat and dog will be spending some time in boarding and I'll be blogging about how they get on.

If you're interested in this weeks Animal Tales it can be found here where I tell you how we moved the cat and dog from South Africa to Dubai.

Next weeks HDYGG, Animal Tales and TimeTraveller will be an updated version of my trip to The Miracle gardens. The new butterfly house is now open and I'm looking forward to exploring it, plus the grounds where I'm hoping they've planted some new flowers.