I only have a couple of photos of the garden centre as I was told off for taking photos. However I can report that a garden centre in Dubai is very similar to those in the UK and as a matter of fact the same as South Africa.

There's the standard cafe, pots, tools, a selection of gifts, clothing and this particular garden centre featured a bike and a book shop as well as the plants and seeds and garden ornaments. You cannot buy fertilisers or weed killer in Dubai, when you ask you're told to go to Satwa, which is an area of Dubai, but no one tells you where or which shop so I'm doing without. 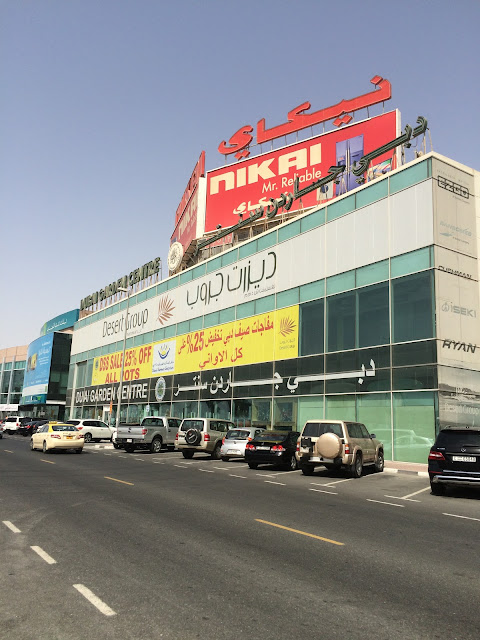 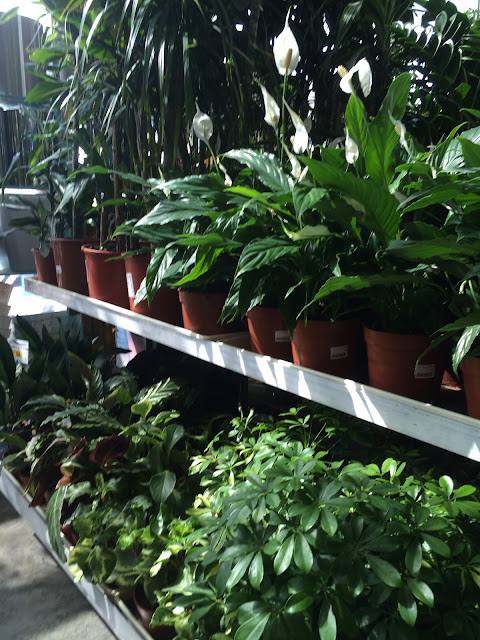 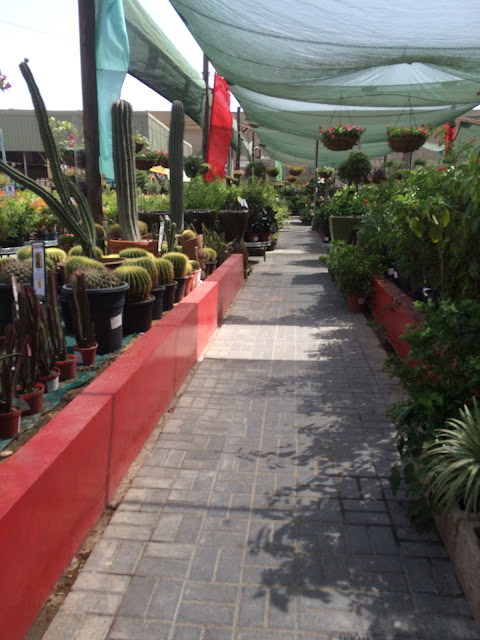 It's too hot in Dubai, even when the sun sets, the temperature only drops to around 31c and it's still too hot to sit outside for any length of time to actually enjoy the garden, so I thought I should bring the garden inside. I was looking for herbs and strawberry plants, as I'm finding it difficult to grow from seed, but I've been informed as it's summer now, they're out of season.
I spent 4 years in the southern hemisphere where the seasons are opposite to the UK, but there were only really 2 seasons, summer and winter. Spring and autumn only really lasted a couple of weeks. In Dubai the weather so far is sunny and hot with occassional rain and cool wind in December and January.

Fresh cut flowers really don't like the heat, even with the air con and wilt very quickly, they are also very expensive. So I looked at some artificial ones which looked quite realistic until you got up close to them. So the decision was made not to purchase any and to stick to some potted greenery. 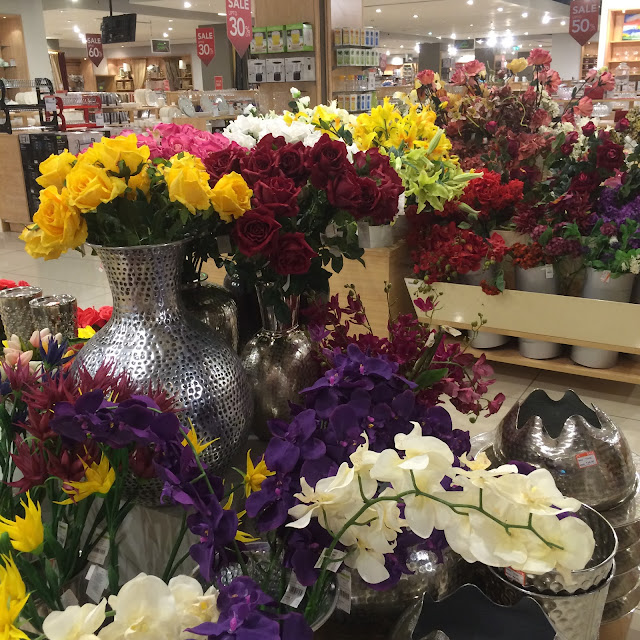 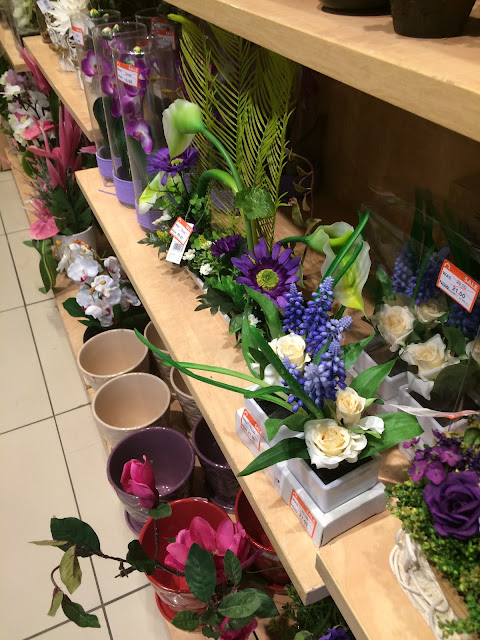 I collected some unused pots and cups to use for planting 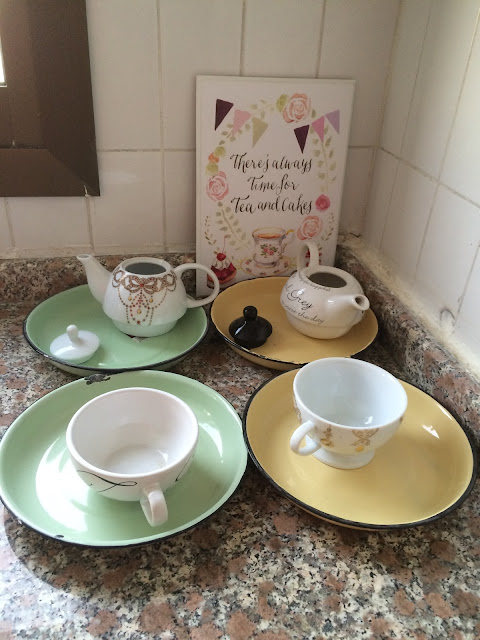 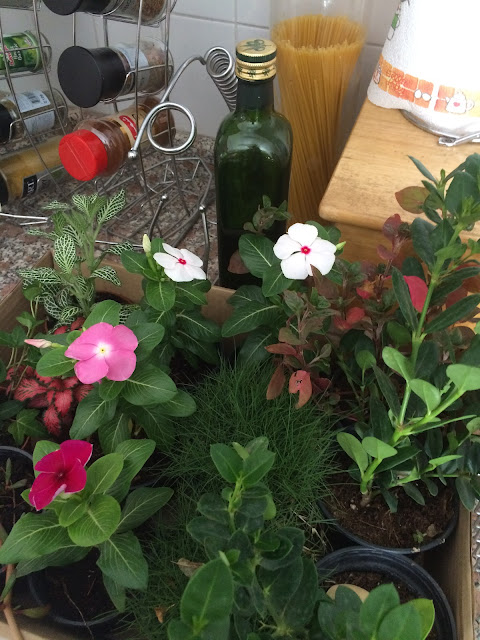 I used zip lock bags filled with water in the porous containers, before putting the flowers inside, I found some plastic tubes for the cut flowers and the plants I wanted to keep in their pots were wrapped with material and tied with some ribbon. 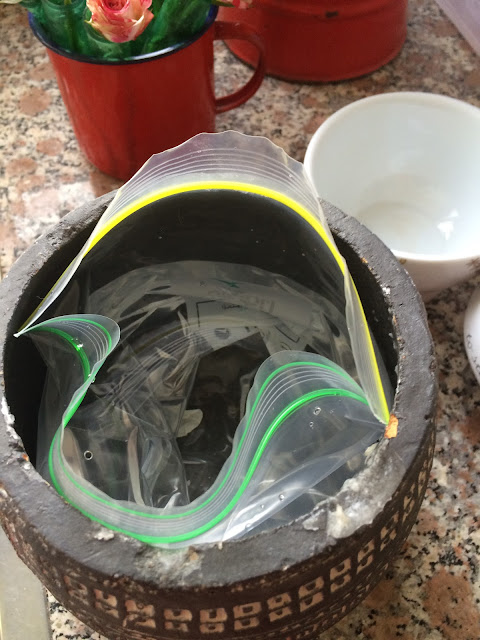 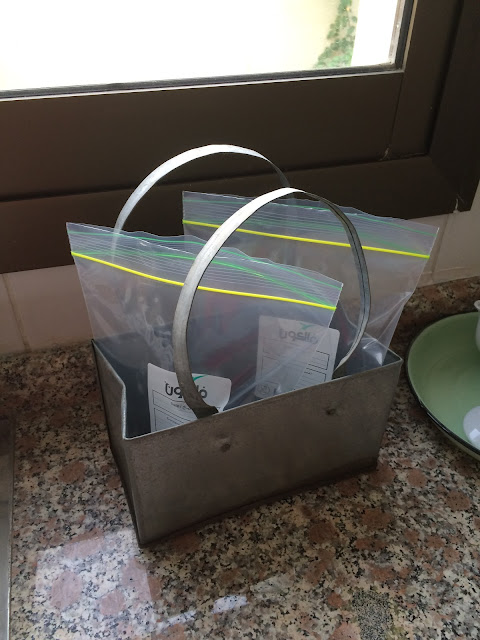 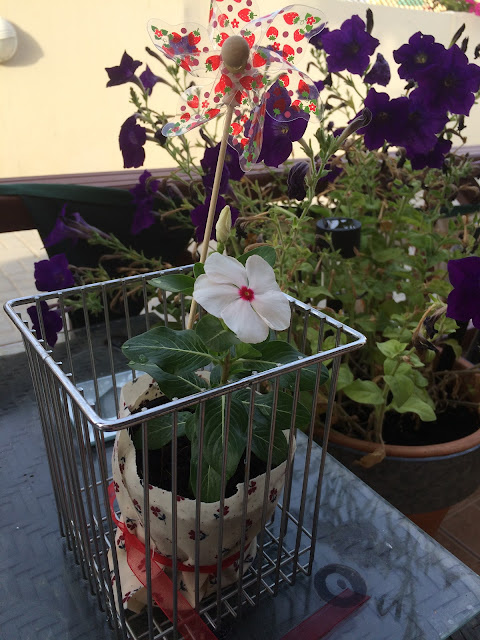 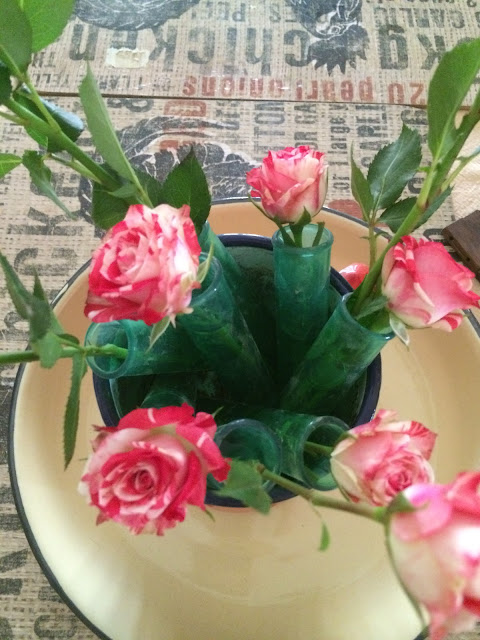 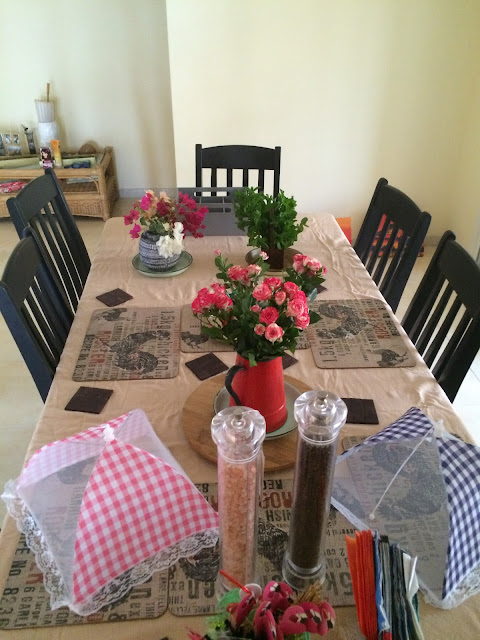 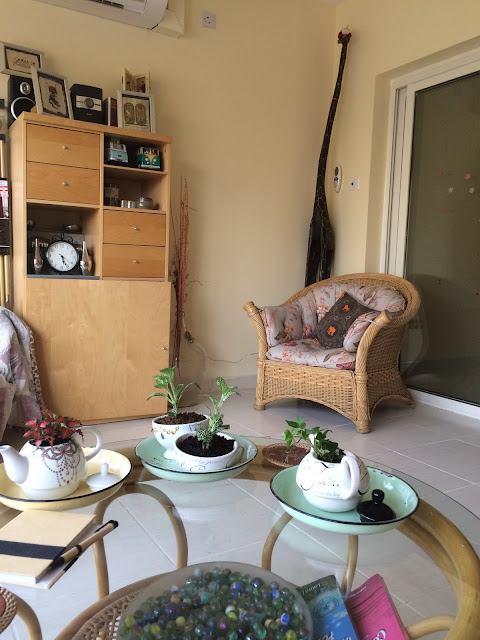 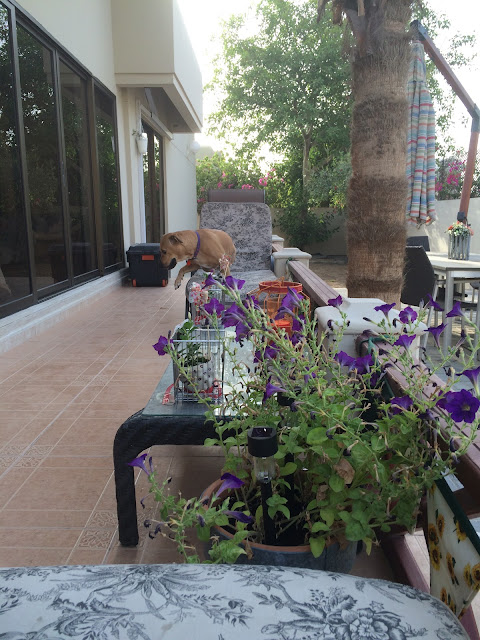 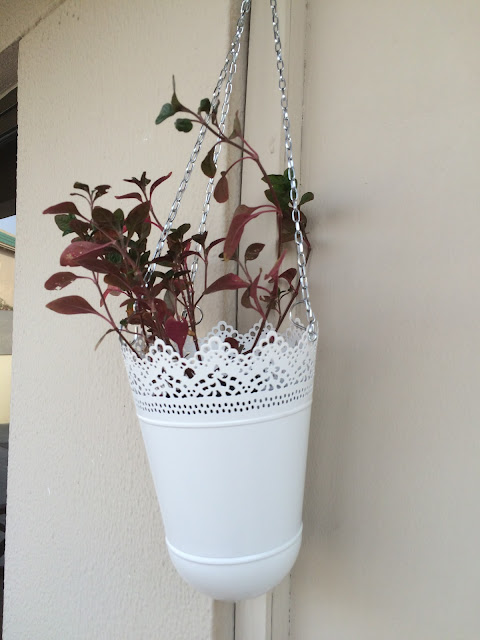 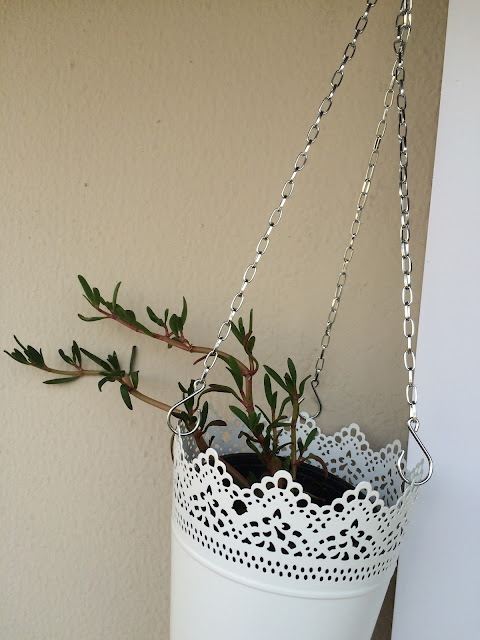 Hubby says there is always too much stuff on the dining room table, but I like to dress the table and I'm enjoying eating my meals surrounded by all the loveliness. 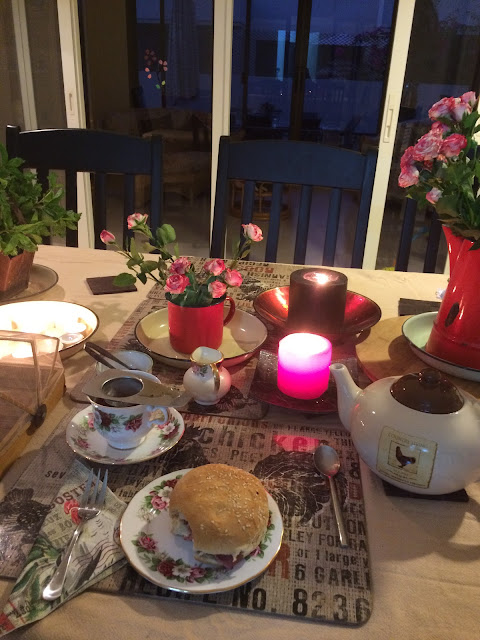 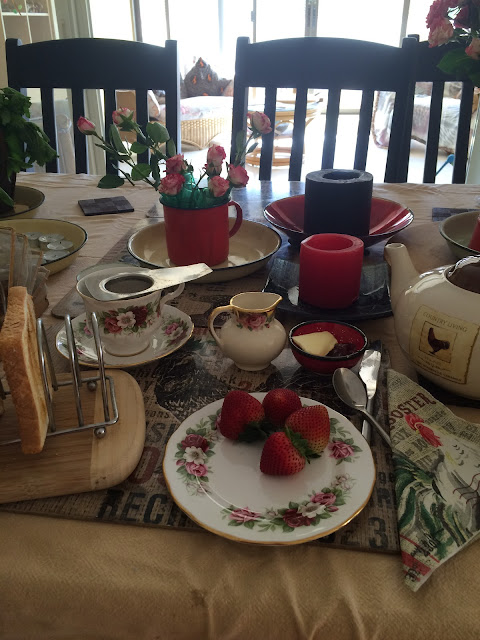 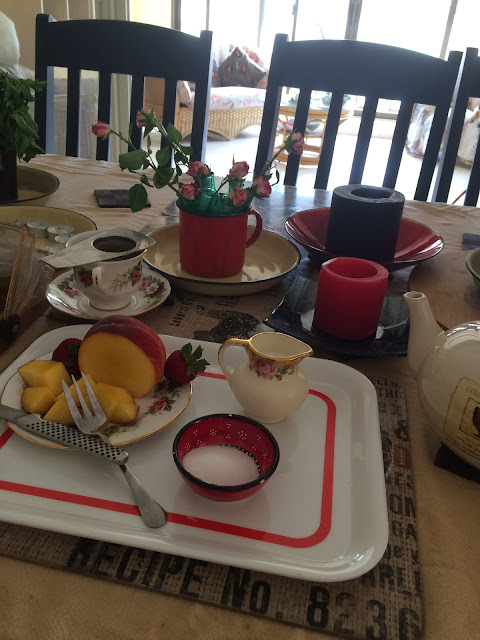 I'm also attempting to grow some more herbs but I'm growing them indoors and I'll let you know how I get on with them. 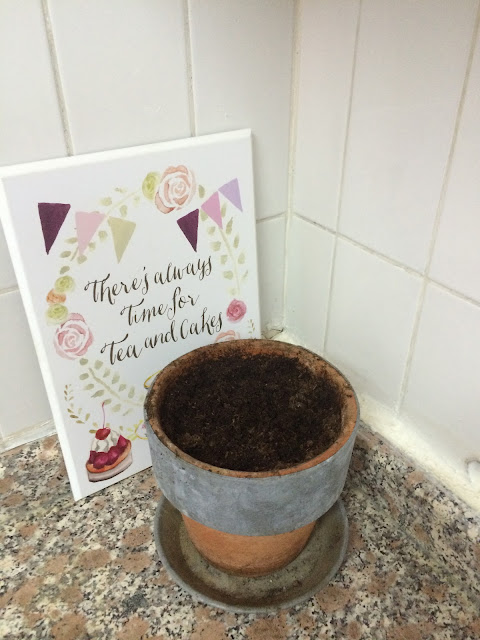 Over the next few weeks for Animal Tales, HDYGG and Time Traveller I will be using old posts for linking up while I'm on holiday. I'm hoping for an encounter with a bear or a moose while I'm in Canada for Animal Tales, I'll be blogging about Catherine's garden who you can find on twitter as @alwaysaredhead where I'll be staying for my holiday and of course there will be numerous posts for Time Traveller.
Posted by chickenruby at 19:34:00

Email ThisBlogThis!Share to TwitterShare to FacebookShare to Pinterest
Labels: flowers, garden centre, gardens, hdygg, how does your garden grow, plants