I travelled to Cape Town in August 2014 with my teenage son. He moved back to boarding school in the UK the year before and we'd never got round to taking him to CT when he lived here. Having made a 27 hour journey by train, the last thing he wanted to do was get on a bus and tour the City. He did come out with me on the 2nd day and the 3rd day we hired a car and drove to Hermanus to whale watch and see the penguins at Betty's Bay on route.

Kirstenbosch Botanical Gardens are located at the eastern foot of Table Mountain in Cape Town and is one of nine National gardens with five of the six different biomes in South Africa. Founded in 1913 to preserve the unique flora.

I visited on a very wet and windy day. I bought a two day pass with City Sightseeing on the Hop on Hop Off bus. Kirstenbosch was my first stop so I took a photo of the time table at each stop. Unfortunately I confused the photos and ended up waiting an hour at World of Birds. 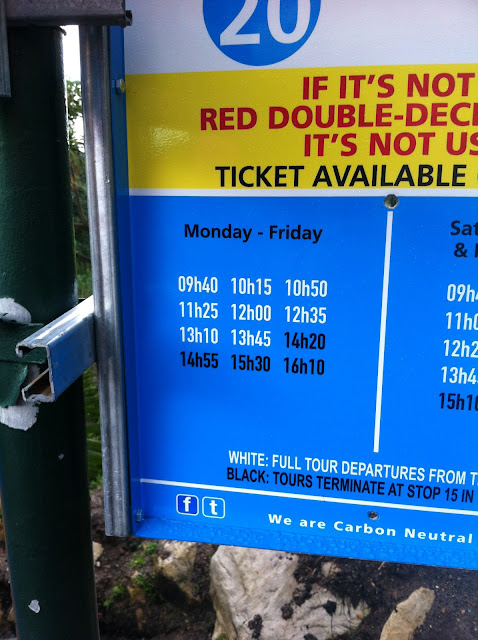 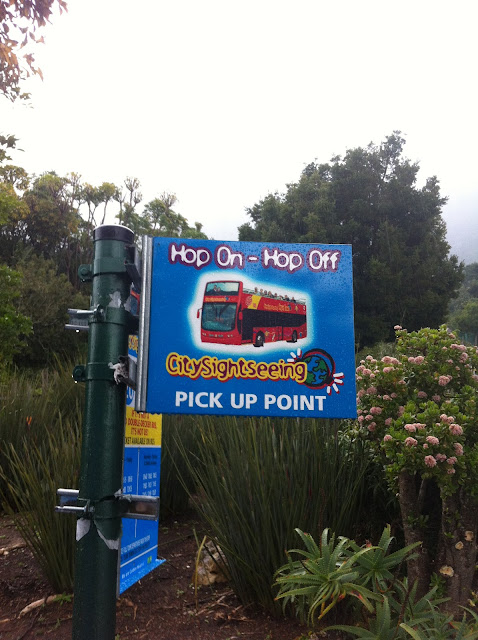 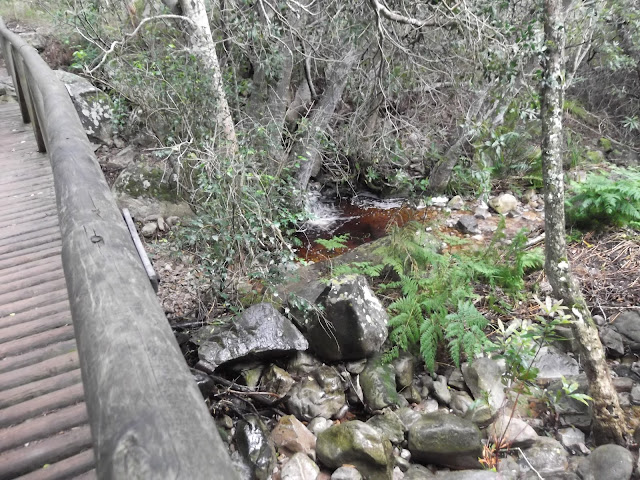 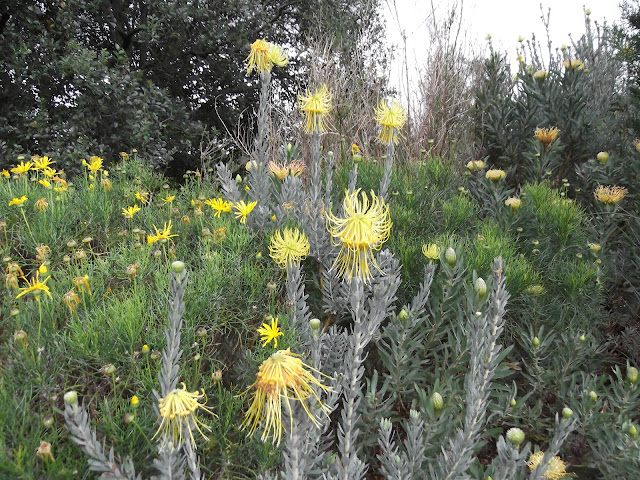 The newly opened Centenary Tree canopy Walkway or Boomslang, meaning tree snake, is 130 m long and 12 m above the ground, and has wheel chair access is a fab way to view the scenery. 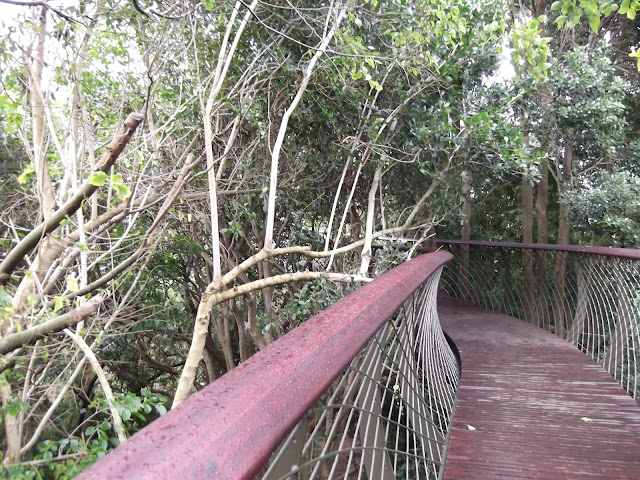 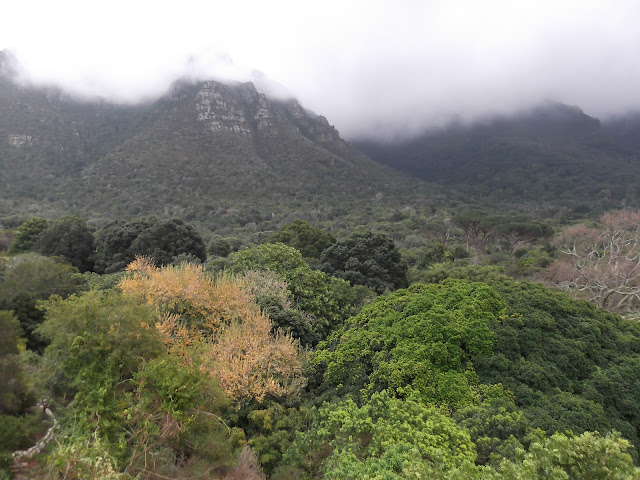 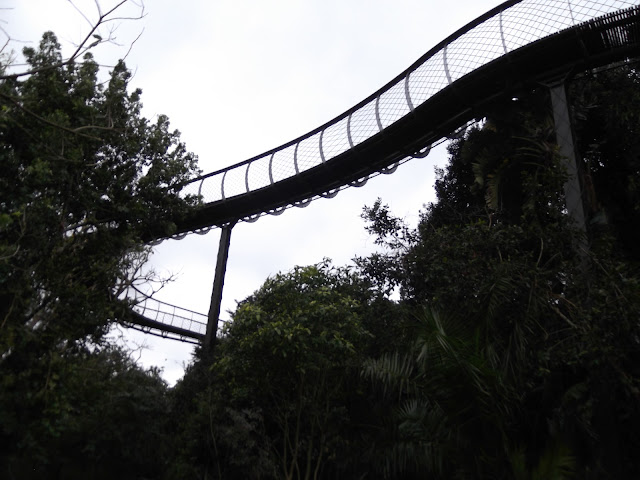 Kirstenbosch contains many plants, including my favourites the Protea, the national flower of South Africa and the Strelitizia regainae 'Mandela's Gold' or more commonly known as the Yellow Bird of Paradise. It symbolises liberty, magnificence and good perspective. 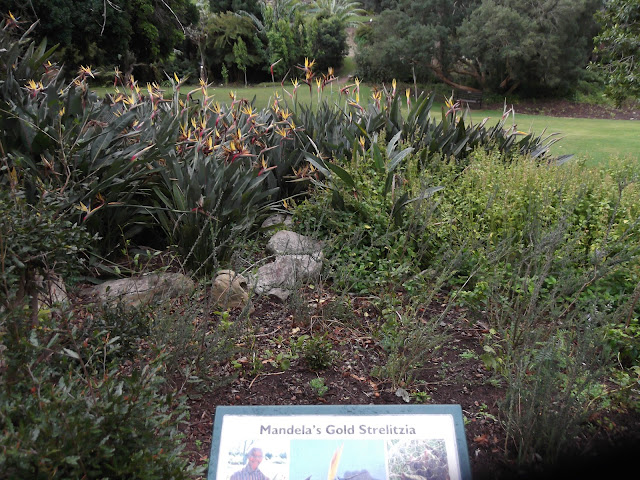 Returning to the entrance, I'd just missed a bus, so I opted for a walk round the gift shop and a coffee.

Hopping back on the bus, my next stop was World of Birds, it was still raining and the attraction did have some shelter from the rain with the trees. I was overwhelmed by the smell and wasn't too impressed with the hygiene and the layout. Also there were peculiar combinations of birds in the enclosures and chickens seemed to feature in large numbers. 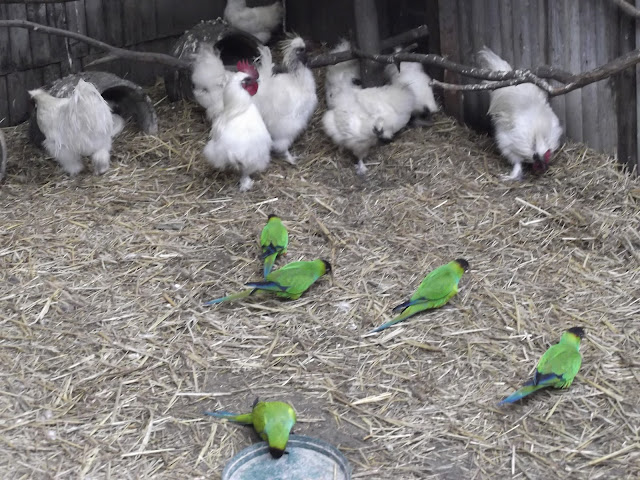 There was also a monkey enclosure and other animals. However I didn't want to go in there, again due to the smell. There was a large school group in at the same time and the air was filled with teachers yelling at the kids and blowing whistles. 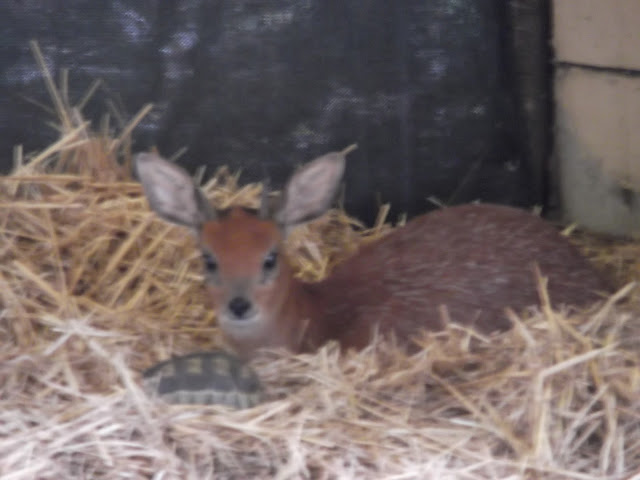 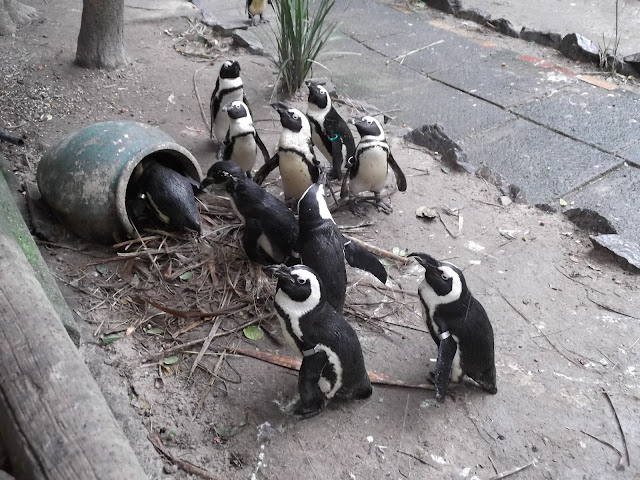 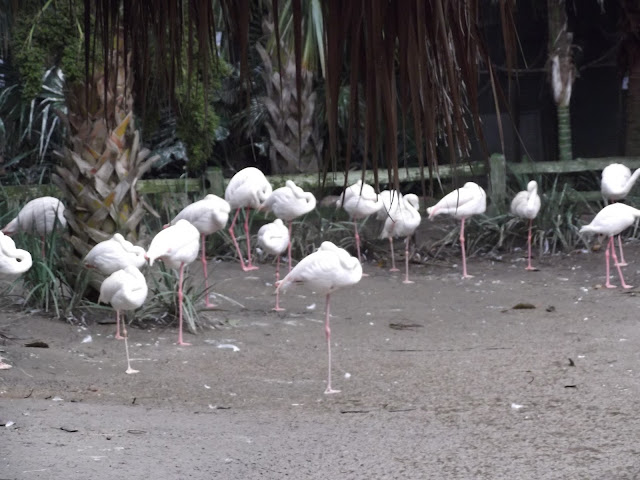 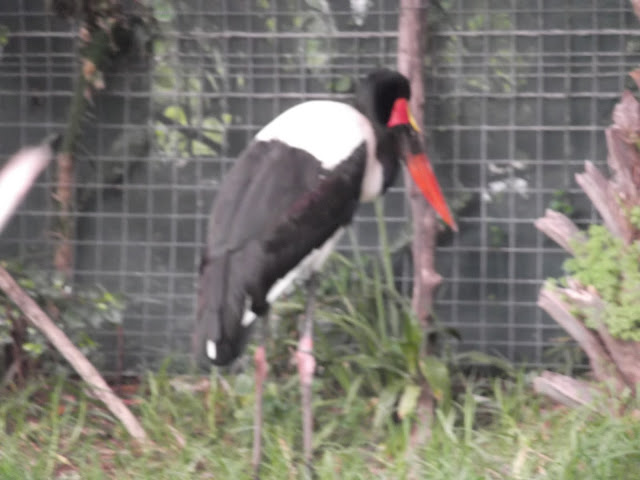 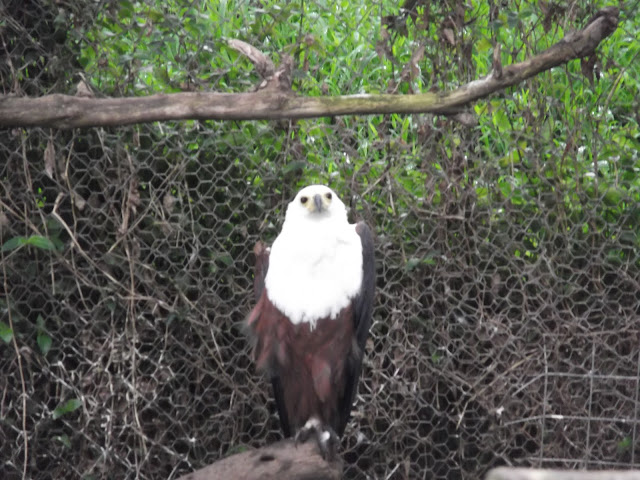 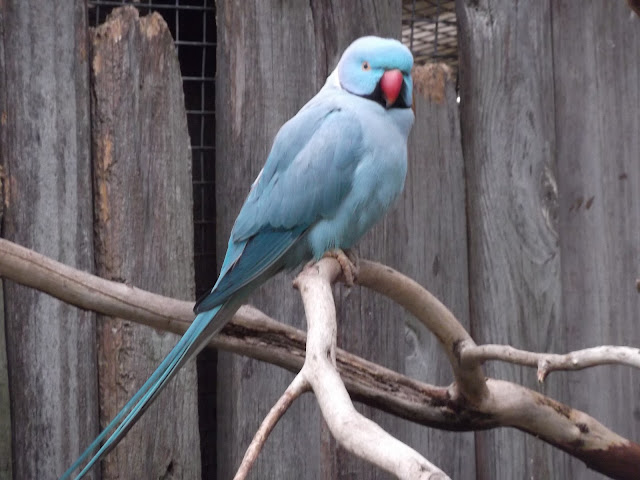 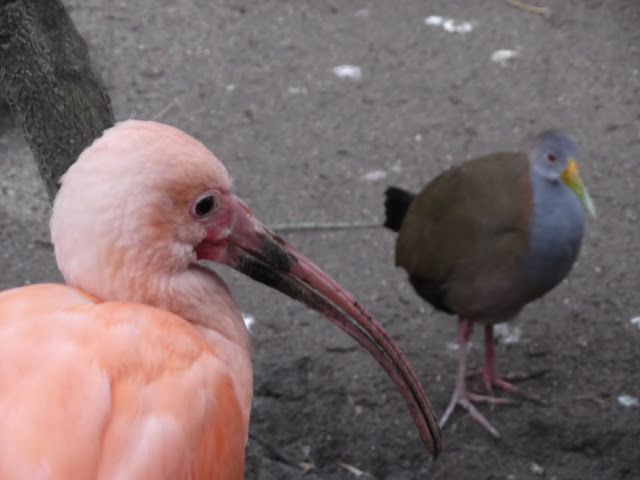 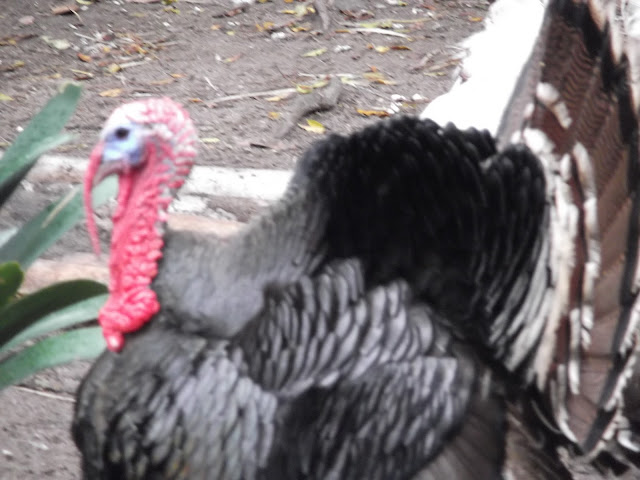 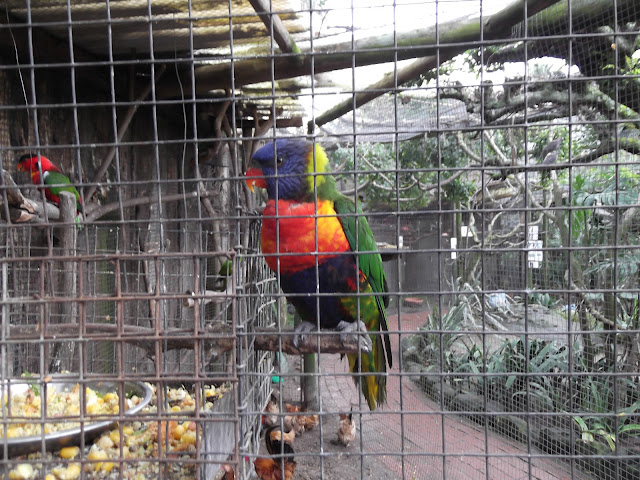 I walked round to reach the exit to discover I'd misread the timetable for the bus and waited for 30 minutes in the bus shelter, it's not somewhere I'd be visiting again in a hurry.
Posted by chickenruby at 06:00:00