It's summer in Dubai and that means it is very hot, which means outside activities are limited. The temperatures in the day are around 42c but only drop 4-5c after sunset. Last week in Dubai the top temperature was recorded at 50.5c, it was unbearable. It does help going down to the beach in the evenings where there is a slight breeze, but the water is the same temperature as the air, but psychologically it feels cooler.

There are many bargains to be had at this time of the year to encourage people to come outside. We took advantage of a half price Dhow Dinner Cruise this week.

Ramadan is approaching, still waiting for confirmation from the moon, due around Wednesday/Thursday next week. Everywhere is offering some amazing deals on experiences, restaurants, entertainment, food and general shopping. I'm going to be in Canada for 3 weeks of Ramadan, it was planned to be this way, as when I initially looked at these dates, we were still living in South Africa. But it's good on many levels. I'm not a muslim but I have to follow the same rules and won't be able to eat or drink in public during daylight hours, neither am I permitted to smoke which is my biggest vice. As I don't work, my activities would be very limited and although I do spend most of the day in the house anyway, due to the heat, I do like to pop out for a coffee and socialise, it can be very lonely otherwise.

The deal we had for the Dhow Dinner Cruise was AED 65 each, I responded to an advertisement on face book, I paid for my vouchers, which I then emailed to the company with my preferred date and they emailed back confirmation, however on the day we were due, I had no idea where we were going other than somewhere in the creek and both the Dhow and the discount company were slow to respond and eventually I received an SMS to tell me where. Baniyas Street, opp Bank Saderat Iran and Emirates NBD.

We left the car at the train station and travelled to Union. 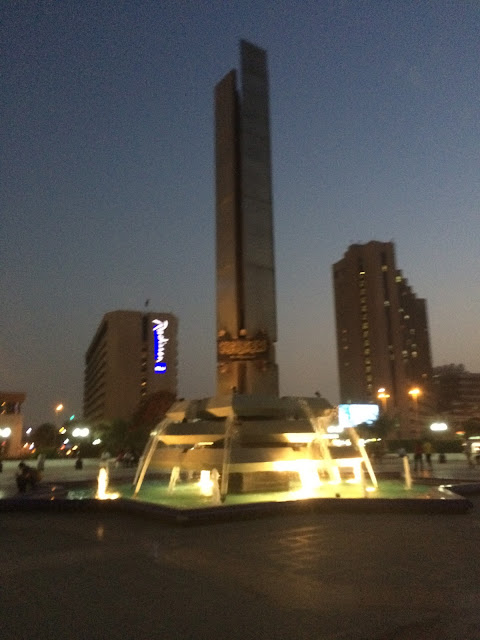 If you arrive early there are plenty of shops open before and after the cruise and some really cheap souvenirs can be found here. 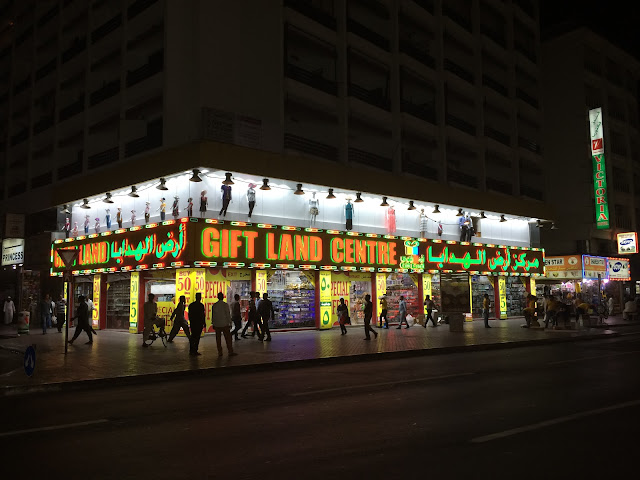 Signage isn't the best in Dubai, so using google maps and locating which side of the station the creek was on, we had a short walk to the creek and then had to locate our Dhow. Of course we turned left towards the Emirates NBD large building to discover the Dhow was actually at the other end of the creek next to the small local branch. 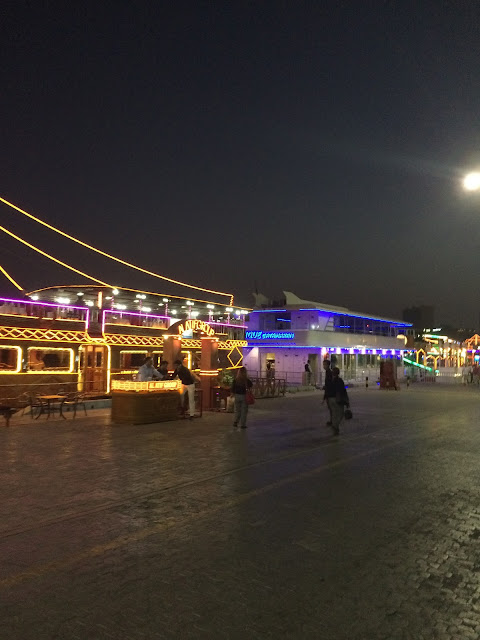 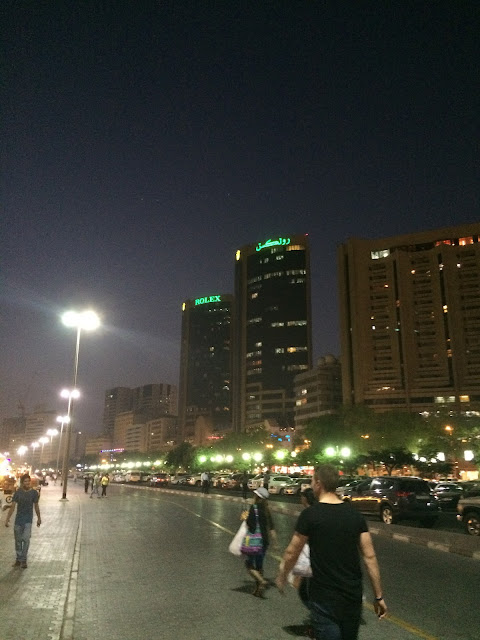 Sitting on the Dhow for 20 mins waiting for passengers to board, we were given unlimited water and fruit juices. Once everyone arrived and took their seats, we set off into the creek with all the other boats and after turning left, we promptly stopped while they opened up the buffet. 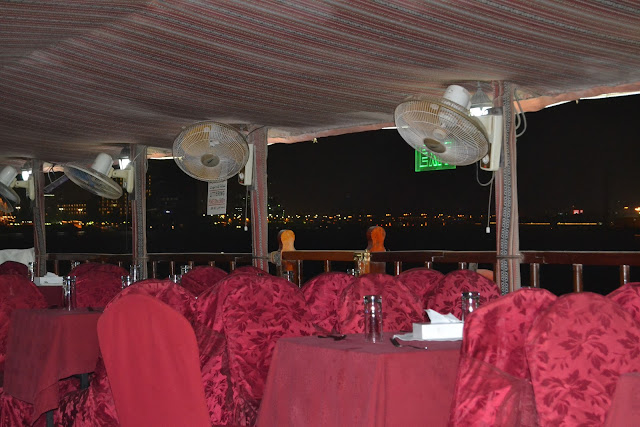 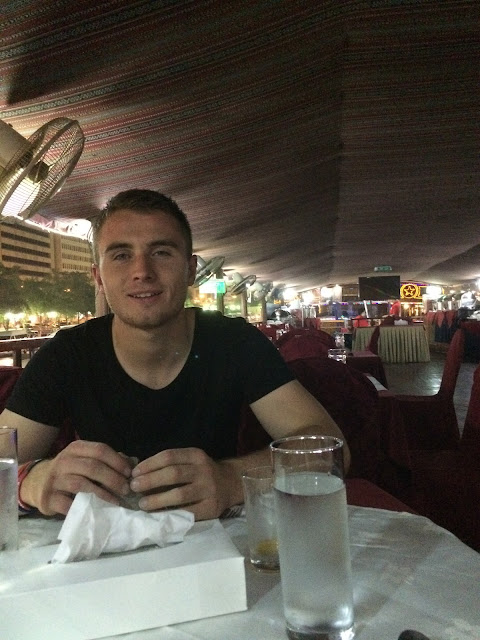 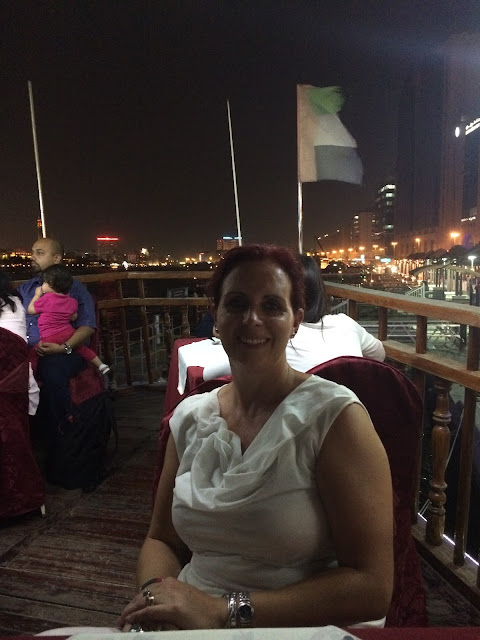 The food was very good, plenty of choice but if you're not a fan of hot and spicy food then this trip isn't for you. The food was clearly labelled so you knew if it was fish, chicken, lentils, veg etc. We piled a little bit of everything onto our plates. My son doesn't eat fish so avoided the last dish, which although written in English didn't actually tell us what it was, but looked fishy. 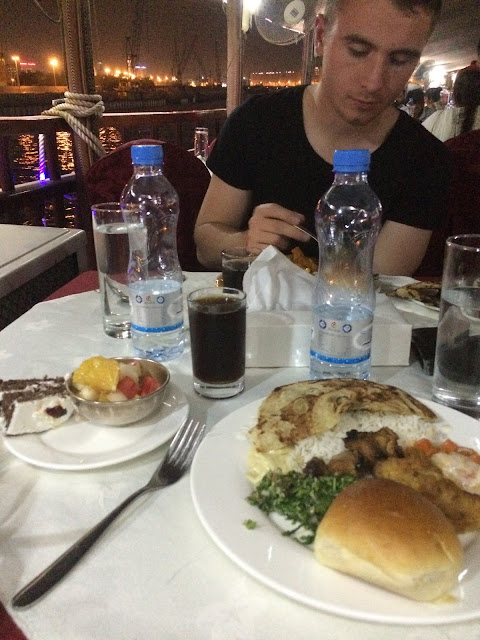 Having spooned it over my rice and returned to the table I took a forkful of the 'fish' with some rice and curried veg. Mmmmmmm interesting combination, I'd spooned a desert of sponge cake and white custard over my dinner. Oh well, I ate it, it wasn't that bad....lol.

We then cruised very slowly past the Sheiks Palace's. no photography is allowed and it was clearly sign posted to say this. The cruise operators were very quick to tell a couple they must put their cameras away, I believe it's an imprisonable offence. I wasn't taking the risk, especially after the 3 Brits who were jailed early this year for taking photos at an airport. 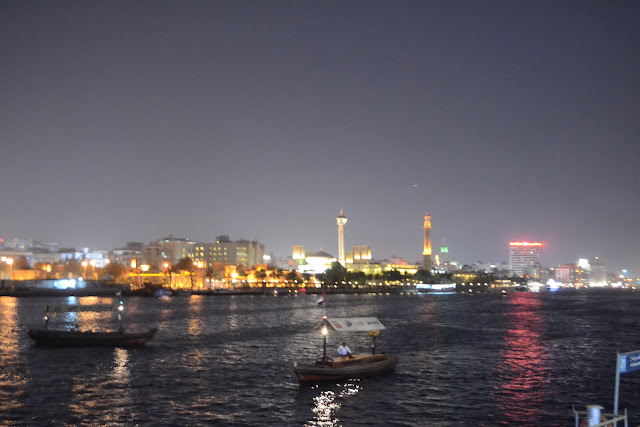 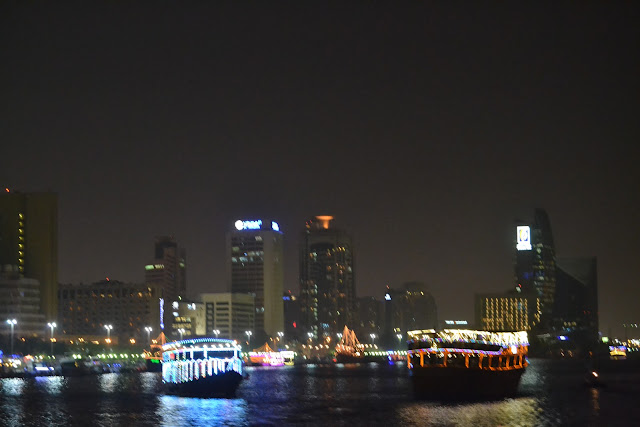 The entertainment was described as music and a magician. The speakers were a little dodgy which pleased me as I'm not a big fan of loud music. The entertainer was a man wearing a large skirt which whirled around in the air with him and lit up when he lifted it over his head and spun it around. He was moving from Dhow to Dhow on an Abra, a small boat, and the show only lasted a few minutes. 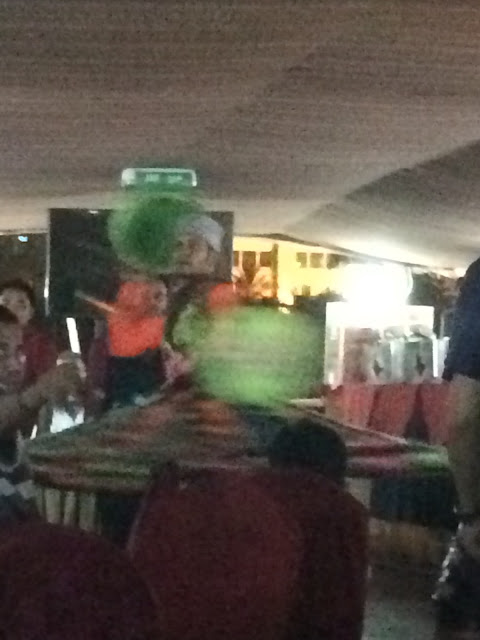 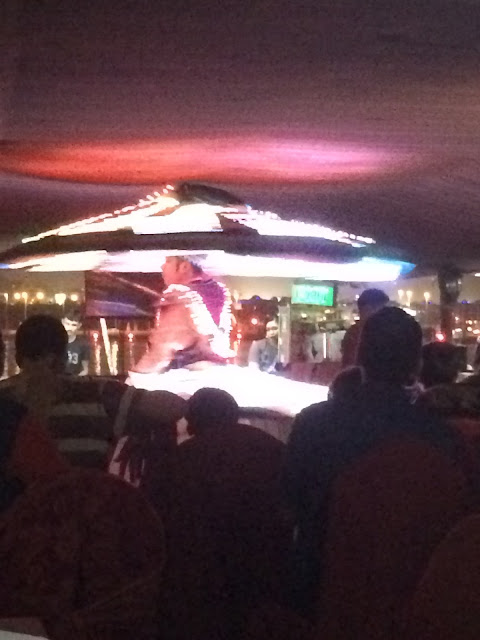 Although the food was good there were several complaints. I'm a great believer in actually making a complaint at the time and if the issue isn't resolved, I'll take it further with management and only if they fail to acknowledge the complaint will I take to social media, which usually is the only way to get a response, sadly, these days.

The toilets were filthy, even my son said the men's wasn't far off unusable. I have found in Dubai that of all the places I've visited that they without a doubt have the dirtiest toilets ever. It can't be cultural, there are too many nationalities living here, but I truly wonder what toilets look like back in some peoples homes. I did complain and was offered some toilet paper, when I said they needed cleaning, I was dismissed.

I also wasn't impressed by the way the Dhow looked. At the top of the stairs were the bins, black bags on the floor. Looking at the other Dhows on the creek you could see they were all cleaner, tidier and offered seating downstairs where the aircon was switched on, we however were made to stay upstairs and there were some grumpy, unhappy children whose parents didn't have the option, to take them out of the heat to cool down. 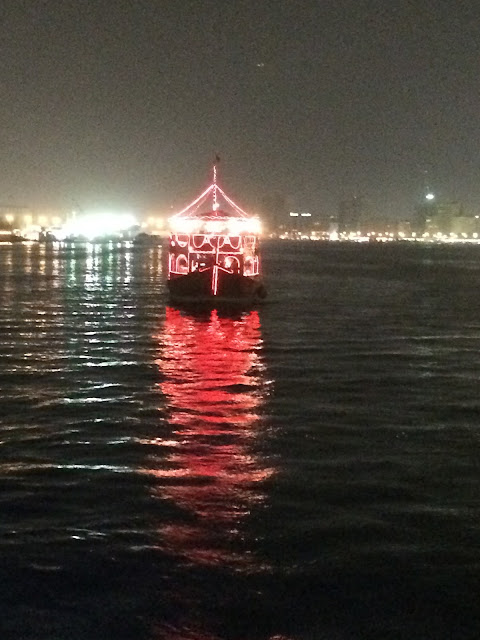 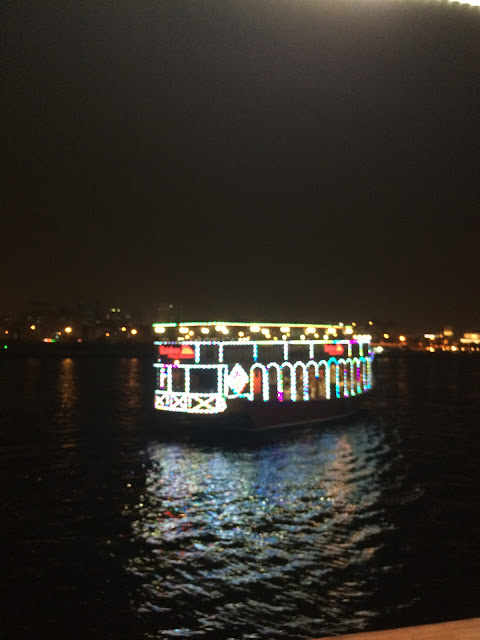 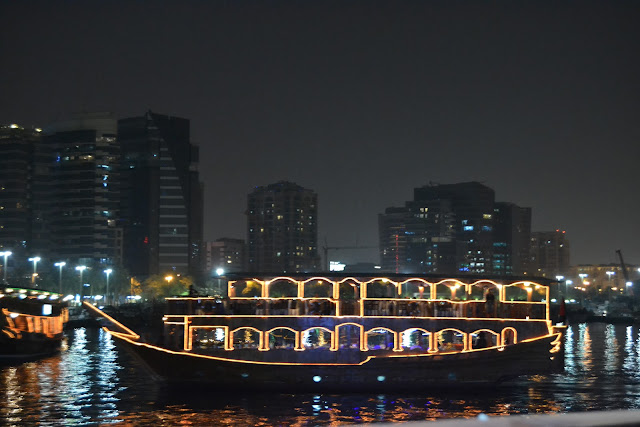 They allowed smoking on the Dhow, yes I'm a smoker, but still, we were eating and there were children around. Both parents of 2 families were smoking while their children were still eating, with the kids sitting on the edge of the Dhow the smoke was being sucked in front of their faces and all the way through my meal I had to contend with the smoke from the table behind me.

Thankfully the 2 hour cruise time was actually only 90 minutes and I had I been enjoying the cruise I may have been annoyed that it was 30 minutes less than advertised.

All in all, it really wasn't 'MY' thing. Everyone says 'you MUST go on the dhow dinner cruise, but now I know why they rant and rave over it, having seen some of the other boats, where alcohol was served, music was blaring and individuals probably paid around AED 500/£90 for the experience.

Large social, party scenes are not for me and I'm also not comfortable around large groups of people when alcohol is being consumed, especially on a boat, in the dark.

Over the next few weeks for Animal Tales, HDYGG and Time Traveller I will be using old posts for linking up while I'm on holiday. I'm hoping for an encounter with a bear or a moose while I'm in Canada for Animal Tales, I'll be blogging about Catherine's garden who you can find on twitter as @alwaysaredhead where I'll be staying for my holiday and of course thtere will be numerous posts for Time Traveller.