It's a sad post to end 2017 with. It's not been a sad year, there have been some great times, in fact 2017 started very well with Peter and I visiting Egypt, the UK and Hong Kong. Despite my father's death in July which was tough and something I'd been expecting, we still have some lovely memories of the year. It was still a shock when he died so suddenly, although he'd been in ill health for many years and had had a heart attack in 2012, it was still very sudden.

I never realised what the impact of losing a parent was like. I'd seen both my mother and father grieve  for their mothers (I'd never known my grandfathers) I was very close to my paternal grandmother, I focused on my own grief, I didn't really pay much attention to what my father was going through at the age of 66. I just thought he was lucky to have had his mother around for so long. I was 46 when my father died, I feel cheated.

I live in Dubai and previously we were in South Africa. For the past 7 years, returning from visits to the UK has been upsetting, always, without exception, worrying I may never see my parents again or not being able to get there in time, as has happened with other expat friends, when a family member has been taken ill suddenly.

When my father had his heart attack in 2012, it took me 48 hours to get back to the UK, 24 hours in flight and transit, no communication and not knowing if my father was alive or not until I got to the hospital in Cardiff as he was coming out of surgery.

I was fortunate enough to have been in the UK this year when he died, just a mile down the road when my sister rang to say he'd collapsed, I arrived before the paramedics and without sounding too dramatic, I sat with him as he died.

It has been a painful and difficult summer, but it's also been lovely to spend so much time with my mother, children, family and friends. Sadly 3 of my close friends lost a parent this year also. One in January, 5 years after the other parent died, another 2 weeks after my dad died and another 2 months later. My fathers cousin on his maternal grand mother’s side, wife died 5 days later also. His daughter who I consider a cousin and whom I’ve been in touch with most of my life called me to ask for the family list of phone numbers as she knew it would be up to date. It must’ve been a terrible shock for everyone to receive the 2nd lot of bad news in such a short period of time.

We've had a lot to do this summer, mum is moving into a brand new 2 bed flat in town in the New Year. We sold the house a week after putting it on the market, 2 months after my father died. My parents were wanting to downsize and move, but my father kept putting it off, as his idea of downsizing meant still having somewhere to store his vast collection of items that he would not/could not part with. So the task began to sell everything as quickly as possible to get the house ready for market.

Although we have a flat a in the UK where I could stay, it wasn't my home. Peter remained in Dubai, keeping the roof above our heads and flew to the UK for the funeral and again in September. But I didn't have him to come home to everyday, I didn't have my routine, my home. I did have my friends around me, but they were dealing with their own grief and I just needed some support from Peter, which of course he did give, but over Skype is very different from just being there, to give me a cuddle and hug me when I cried.

Mum has always said 'One year and a day' in reference to any decisions being made after a spouse has died in regards to moving on. But because I was in the UK for an indefinite period of time, we just decided to get on with things. Would life be any easier going through everything and selling up 366 days later?

We've literally stripped the house bare, emptied the attic, study, games rooms, 2 sheds and a garage. We've sold a train set, toys cars, pub and sporting memorabilia. There were 4 sets of golf clubs, 20+ fishing rods and all the associated paraphernalia. Stacks of newspapers, a pool table with 10 sets of pool balls. We sent a whole truck off to auction, sold things at boot sales, donated clothes to charity shops and done more skip runs than I care to recall, getting rid of furniture, video cassettes and enough paint and DIY products to start our own shop.

This has meant each and every item that belonged to my father has been examined, handled, plugs have been rewired so we can remove items from behind furniture. Furniture has been dismantled. It feels like not only have we got rid of my fathers stuff but we've removed every last trace of his essence, his being. When I next return to see my mum, she'll be in her new home, there will be no physical or emotional trace of my father in there.

It was an intense 5 months and now I'm back in Dubai, we moved house ourselves this month. I've had to tell people over again, as if it's all fresh and only just happened that my father has died when they ask where I've been all summer. But the hardest thing for me has been packing and moving. I feel like I've started all over again with my fathers things. There is so much of him in our home, even though he's never visited here, although he did visit us in South Africa. There is furniture we had in the UK and SA that he sat on, there are items he fixed, there are gifts he bought me as a child from his travels. His old story books his granny gave him as a boy, that he passed onto me recently. Company pens and other paraphernalia, popping out of drawers and cupboards, photos on the fridge of him with his mum, with my kids.

When mum and I went through my fathers things together, she attached a story to various items before dismantling or selling them (need to know anything about fly fishing, then seriously she's the woman to ask) I'm now going through the process again, 5 months later, reliving family events, childhood memories with Peter and they feel fresh, the grief feels like it did in the first few weeks again. I feel ill, sick. I'm not sleeping.

When I got on the plane last month to return to Dubai, it was knowing that this time my father wasn't going to be there on my return. I've not left my mum on her own she has my sister and niece and family in the same town. But this is my story of my grief, what I've done, how I've coped and how I'm not really managing. They have their own ways of dealing with things. Christmas will be hard for them without my father there, even if it is missing his moaning about the cost of things. But I'm not really sure much thought has gone into what I'm going through, how I'm coping because I just get on with things, or take over (as i'm often told) because I don't share how I'm feeling. I guess I just understand what is going on in the UK, but no one understands what it's like to live so far away, even if it is through choice. I've missed out on so much stuff back home, but I've done so much more stuff by living away.

I know my father was proud of me, despite never saying it, he wasn't one for emotion. I can hear his words and often say them out loud as we sold his stuff, dismantled the furniture. 'that's a good piece of wood there Suzanne, save those screws' but he would not have been proud of me for doing all the above, because he would have hated every minute of it. Had he survived the stroke and we'd had to sell the house, the stress of us selling his stuff would've killed him regardless, he wouldn't have let us get on with things in our way, he's have shouted at us from the sidelines to stop telling him what to do and it would've all been very unpleasant.

So in a way, my father had the best death that was possible for all of us, he always said 'I'm just going to go one day' and he did. At home, with his wife, 2 daughters and his youngest grandson. Peacefully and without pain and now we're just doing what we have to do, in our way, whether it's right or wrong or being done too quickly, who cares?


This is the last photo I took of my father, 3 days before he died. 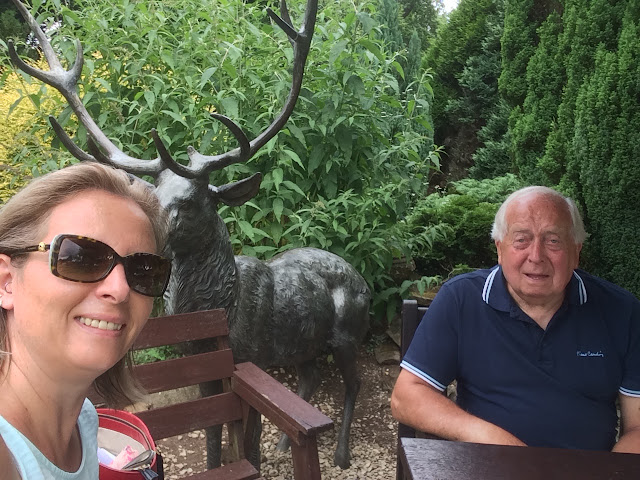