In 2017 my front tooth fell out. I picked it up and just shoved it back in, visiting a dentist in the UK the following morning, wedging it back in place he informed me it was on a post and if it fell out again that would be it.

I've known for a long time that I've had bone degeneration and receding gums and eventually I would have to face the expensive and timely implant journey I am now on.

I don't have a fear of dentists but I've been avoiding it as long as possible. a) we didn't have the spare money b) I have chronic neck pain and find sitting of any kind difficult for long periods of time. This includes flights, cinema, hairdressers, in a car. I suffer with severe migraines. c) I've had some bad and I mean really bad dental treatment in the past.

I'd researched dental implants in the past and had a couple of consultations over the years. the route was to have the teeth removed and implants put in on the same day. I knew with the bones I have this wasn't the best option and when I raised it was dismissed, so it all got put on hold.

Over Christmas I heard a snap in my mouth when eating and my front tooth was loose again. I asked for recommendations online and after several weeks of research I found myself at the clinic of Dr Geoffrey Shape in Dubai at the Perio Clinic.

You may ask why I'm giving you his name and it's because he is good, his team are good and he listens, something I've had problems with in the past.

On our first meeting I informed him that he wasn't getting his hands on my teeth or my money unless he listened to me first. He listened.

My teeth were in poor condition, bits missing, rotten teeth hiding under crowns and I was slightly embarrassed by the state of my mouth. I also told him about my inability to sit for periods of time and that I didn't have dental phobia, I just can't sit still......he listened.

And so my journey began. I had a full break down of costs and time frame for procedures, which was amended with consultation as time went on. 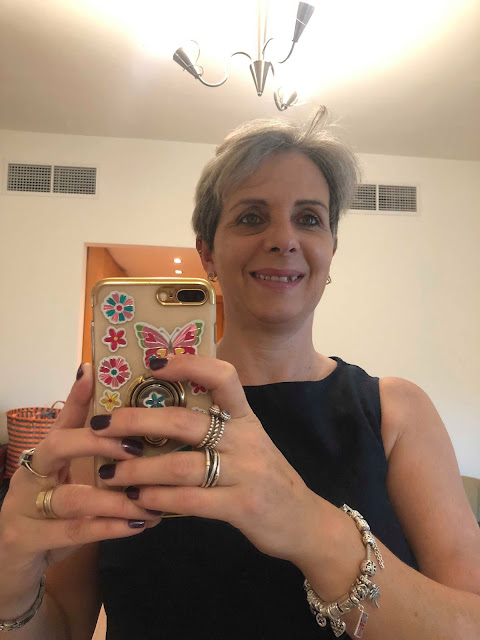 Phase 2. 4 further teeth removed, one from each corner of my mouth, a deep clean of my gums and a new plate fitted.

In was in a lot of pain and discomfort once the injections wore off but I think having all those injections in each corner of my mouth with hindsight was not a good idea, however it did make the deep clean far less painful when I've had it done in the past without injections. One socket had a stitch in it which irritated me.

Sent away for a few weeks for gums to heal and to get used to wearing a plate.

The first plate fell out every time I drank anything and I couldn't eat with it in. 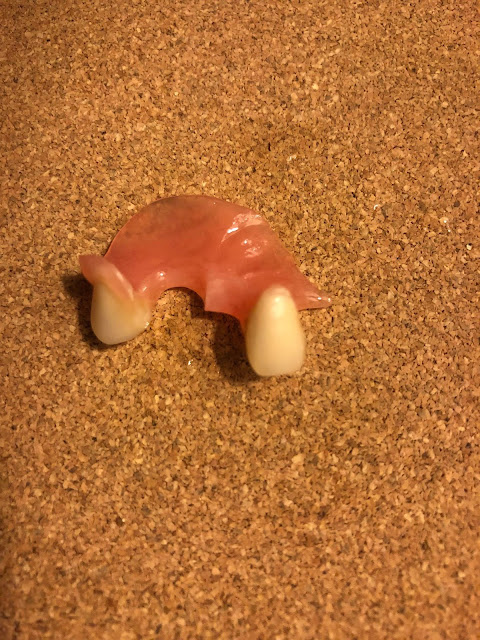 The second plate was a mouthful and for the first few weeks I felt like I was choking on it, but as the gums healed the plate fitted better. 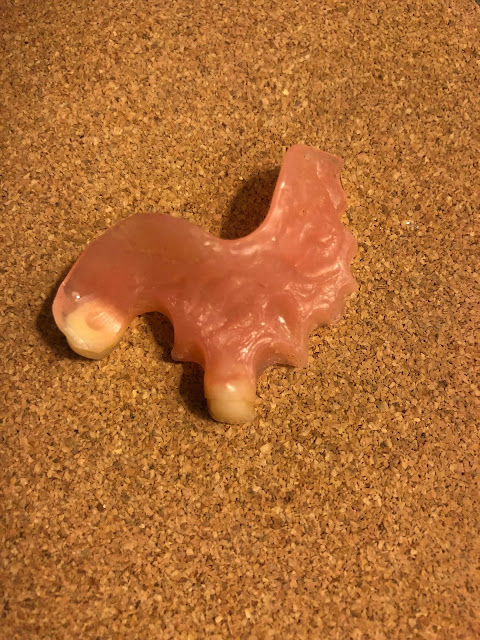 Both plates took some getting used to, my speech was affected, they were constantly moving in my mouth, food got stuck underneath the plate and in the first few weeks I was uncomfortable going out wearing them for longer than an hour or two. I soon adjusted. I don't wear the plate when I'm at home or walking the dog. I have no problem with removing my teeth when I'm out to rinse them under a tap and I take them out when I'm driving and as soon as I can. A friend suggested Poligrip which has helped reduce the amount of food that gets underneath.

Phase 4. Bone graft into the sinus and two posts fitted. Total time in dental chair = 4 hours with a short break in between teeth.

I took a cushion for my neck and a hot water bottle for my back which the receptionist kindly refilled half way through. I downloaded some pod casts and at one point almost drifted off.

Now I'll not lie, but it wasn't as painful or as uncomfortable as I thought it would be. The injections are the worse, but he used a numbing cream fist which helped. My face was uncomfortable as my lips were stretched and my neck hurt from tipping it back on an angle, but time passed quickly and I drove myself home afterwards. 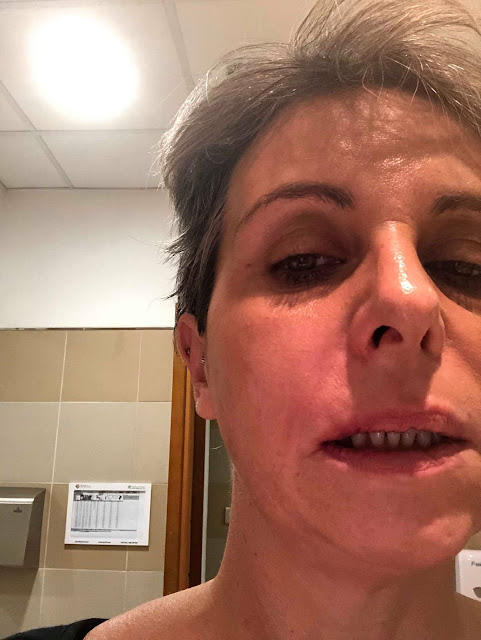 I was surprised when the stitches wore off that I wasn't in any pain and managed to eat and drink that night as normal, soft food only. Again the stitches were the biggest problem, there were 8 of them and I could feel them all the time. Wearing the plate helped an awful lot. 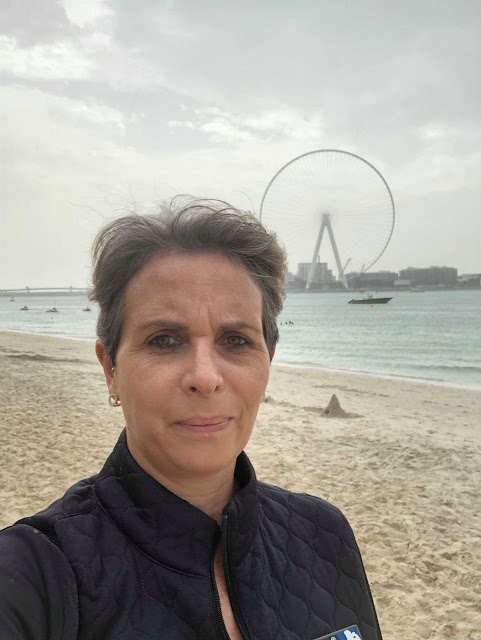 4 days later and back to normal. 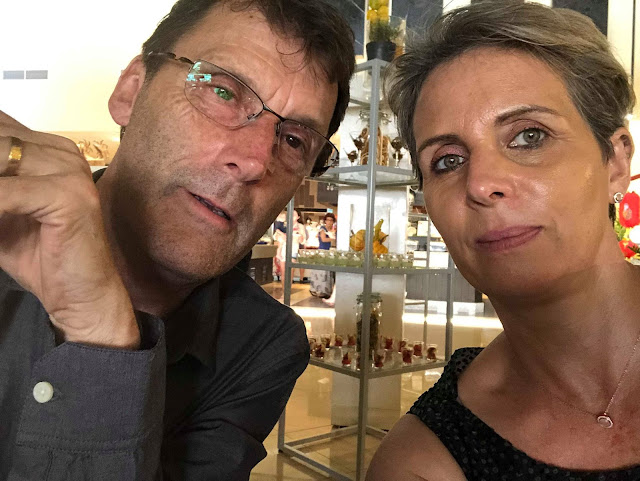 Phase 5. Removal of the stitches and the last implant post, lower left jaw fitted. 2 hours in the dental chair.

The first time I cried was when he removed the stitches from my upper gum, it was so painful, but he was kind and patient and gave me a low dose of injection to numb the area. The worse part of the lower jaw implant was the vibration of the drilling, my ears were ringing. No pain after the injections wore off, drove myself home, ate and drank as normal. I did feel sorry for myself though.


Recovery time longer due to my neck hurting more this time. 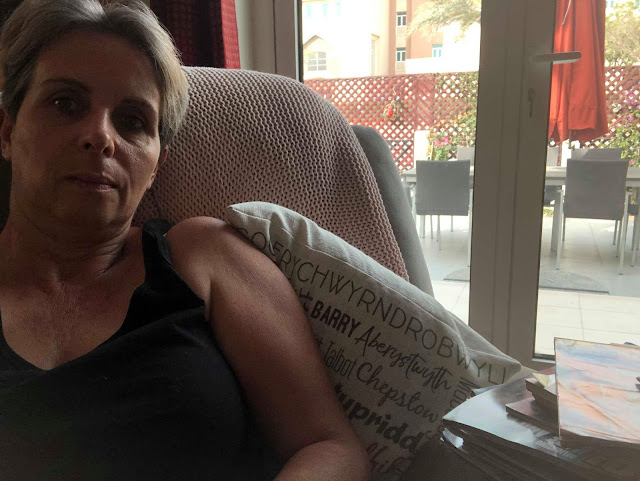 I've been eating and drinking as normal, although I have changed my diet slightly but mainly eating soft foods such as fish and rice for dinner most night, yogurts, honey and bananas and porridge for breakfast. I've not been eating bread, red meat (unless it's minced) and I've drastically reduced my sugar intake and stopped eating sweets and chocolate. In fact I noticed when I ate some chocolate I had a migraine within a few hours and I've lost around 4kg which is doing me some good.

There are a lot of do's and don't's to follow after the surgery and in particular the bone grafting. Avoid sneezing, no swimming or exercise for a week afterwards, stop smoking for two weeks after surgery,.

One thing that should've been added to the list was 'don't attempt to blow up a balloon' your head will feel like it's exploded.

Phase 6. Stitches out, they bloody well hurt so a local injection was given, plate adjusted and dates set for the next few and final phases for a temporary tooth for the front as the gum has to be re cut to expose the post and some minor surgery to ensure the gum heals properly and looks nice around the new tooth.

The other 2 implants have a metal cap on them and I can feel them in my mouth, with my tongue and there's a slight metallic taste.

The following morning after the injection wore off, I've realised the 2nd plate is now too big. I did mention it felt like it was pushing on the back of my teeth, but when I ate today it kept falling out, so I'll have to go back again to get it sorted.

I'll update this post as time goes on, but for now, other than sorting the plate out, I've got a break from the dentist for the next few months. Next appointment May 26th 2019.

Phase 6 Dental plate no longer fitting. Back to the dentist for the gum to be cut, dental implant post exposed, temp tooth fitted and several stitches in my gums. the plan is for the gum to heal around this tooth as it will be visible when finished.

The tooth is fitted with a screw in the back of the tooth which is tightened and then the hole filled.

I left the surgery in agony, not my tooth, although my gum is sore, but with my neck. I couldn't sit still, I was fidgeting and cried with the pain from sitting for so long.

Next phase is a mould, 3 teeth made and then the following week the teeth fitted and a final check up and I'll be done by the middle of July.