I don't dislike kids, I have 5. I've also been a youth worker, child welfare officer, ran a youth football club and worked as a teacher.


One of the rare occasions where the kids weren't tearing chunks out of each other and causing disruption to others, with me running around, apologising, trying my best to parent and breaking up fights. 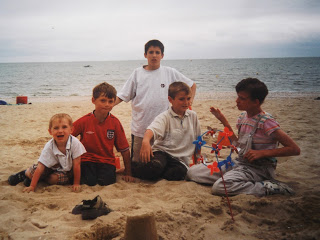 We've just had half term in Dubai. As my kids are now all adults I only notice it's half term when a) there's no school bus honking it's horn outside my door at 6.45am because the neighbours fail to get their kid ready for school on time every morning b) the roads are empty c) when I look try to book a flight I find it's showing 'only 4 seats left' and the price has gone up and d) the local pool/mall/coffee shop is full of kids.

Like I said I don't dislike kids in general, I just dislike the way some parents allow their kids to behave.

In the Mall one morning a group of mums having a coffee, where are their kids? Running up and down the mall, screaming and fighting. I'm trying to have a coffee in peace, so are their parents, so the kids are no where near them, it's my table and other shoppers they keep running into and screaming at. The parents didn't look up.

At the pool one afternoon the kids are jumping off the side, running amok, screaming because they've been splashed by a sibling, while the mother's sit and chat ignoring them and the life guard who is now running a creche to ensure the kids don't get injured.

Two young girls around the age of 10/11 are playing music on their phones, competing with each other, what did I hear the mothers yell? 'Go and sit down there, we don't want to hear your music, we're trying to talk' So the girls move to new sun loungers, right next to me, the opposite end of the pool from where their mothers are sitting and play their music full blast.

I ask, strike that, I tell them to turn their music down, they ignore me, so I call across the pool to the mother's to tell them to tell their kids to turn the music off, as I don't want to listen to it any more than their mothers did. They are told, it is done grudgingly, I am now the bad guy.

Kids in general are wonderful and I obviously don't dislike kids, like I said I'm a teacher by trade and a mum of 5 with numerous nephews and nieces.

You'll note there is a direct link with my dislike for kids when their parents are around, it's like they have a safety net and permission to behave in a certain manner to test the boundaries and authority because their parent is right there, there to protect and defend them and to shout at anyone who dares to complain about their off spring.

I'm more than happy to let kids be kids, I fully understand the screaming baby on an aeroplane and how fraught the parent already is, there's no need for me or anyone else to make tutting noises, there's the toddler that kicks the seat behind me, it's bored, so am I on a 7 hour flight, I'll make eye contact, smile and hope the child settles. I also fully understand 'hidden' disability. In fact it's always my first assumption if a child is screaming hysterically or running around and disturbing others, but I'll observe the parent also and often offer to help if they're trying their best to manage the situation.

There are many situations out of the parents control. But there are also many situations where the parent just doesn't care how much disruption their child causes others as long as they can make that call, eat their dinner, chat with friends over a coffee in peace and just don't care about anyone else.
Posted by chickenruby at 09:18:00