So our drive from Sydney, the Great Ocean Road and trip to the Grampians has ended in Melbourne till next Sunday when I fly home to Dubai.We've driven 2500 kms (1500 miles) and probably spent 4-6 hours a day in the car each day and apart from when we've gone to our own beds at night have been together 12-14 hours a day.

I'm visiting child 3 who has been living in Australia for 2 years now. Mainly in Sydney, but he's moving to Melbourne to work on a farm for 6 months, part of his visa conditions. He's been excellent company and is one of the few family members who doesn't need to make plans. We've stopped where we've wanted, eaten when we've felt hungry, booked accommodation as we've got near a town or said 'enough' driving for the day. He's unloaded and reloaded the car, shared the driving and the costs and I've allowed him to look after me and make sure I'm ok. We're in one place now for the week, he has friends here to visit and we'll be doing a lot of our own thing as well as exploring the city, beach and surrounding areas.

216 Sunday After yesterdays climb up a mountain, child 3 thought today he'd take me to a waterfall. There were 280 steps down and back up. I really didn't think I'd make it. However Child 3 slept on the way from Halls Gap to just outside Melbourne while I drove none stop for 3 hours. Guess It wasn't that bad for me, he was suffering though lol and he's 20 years younger than me. We arrived at our apartment in Melbourne with the most spectacular views. We had to call the company to send a cleaner round and considering it's Sunday, they obliged quickly. I caught up with blog comments and wrote several posts, paid bills and replied to emails. 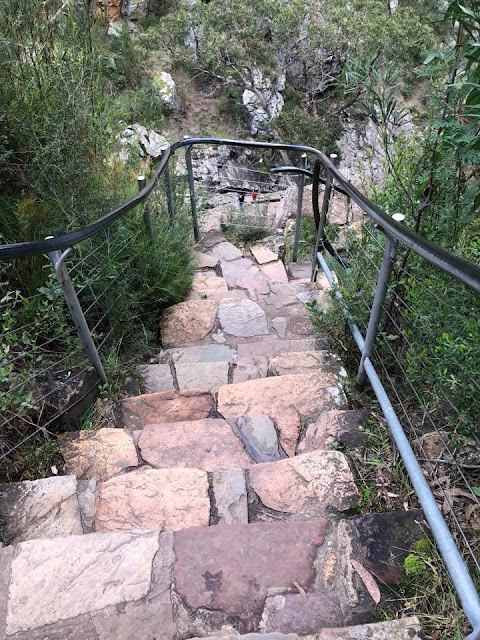 217 Monday We had a lie in then I headed off on foot to the local coffee shop with Jamie meeting me an hour later, we walked around the city, he had some shopping to do, he's been after a new i phone. We walked Bourke Street and explored some of the alleys and graffiti art. Melbourne is a mix of old and new, much taller buildings here than Sydney. The weather is colder and raining but not hampering our activities. We went back out in the evening to a Vietnamese restaurant.

We're in an apartment on the 35th floor over looking the city. 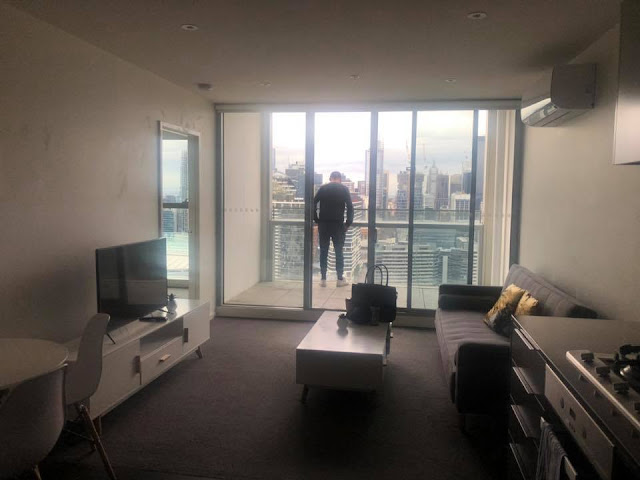 218 Tuesday We visited Moonlit Conservation Sanctuary near Hastings. It's so funny seeing all these British place names, geographically out of order. It's opposite Brighton which is next to Cheltenham and not far from Sorrento. I got to pet a koala and stroke him. His name is Victor and he was 3, so soft and adorable, my new favourite animal. We also hand fed wallabies and kangaroos. After an hours drive back I went for a walk around the docklands and Jamie got ready for a night out. I whatsapped called the Things, Mum, Niece and Child 4 who is visiting, went for a swim in the buildings pool and waited up till midnight for Jamie to come in. There's only 1 key for the apartment and you need the fob to operate the lift. 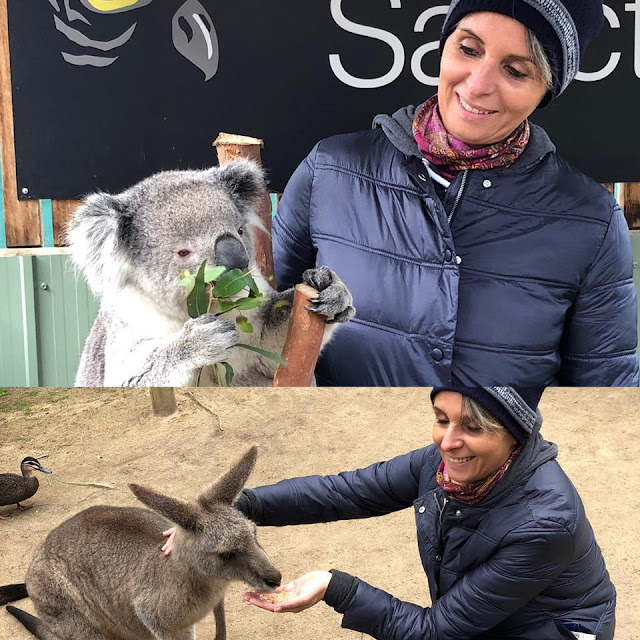 219 Wednesday Coffee while Jamie got ready then we went to St Kilda for the morning, we walked along the pier and saw a penguin hiding under the rocks, had pizza for lunch and drove back into Melbourne. In the evening we went to the night market, it was really busy, we then had a Starbucks and I returned to the apartment and Jamie went out with a mate. 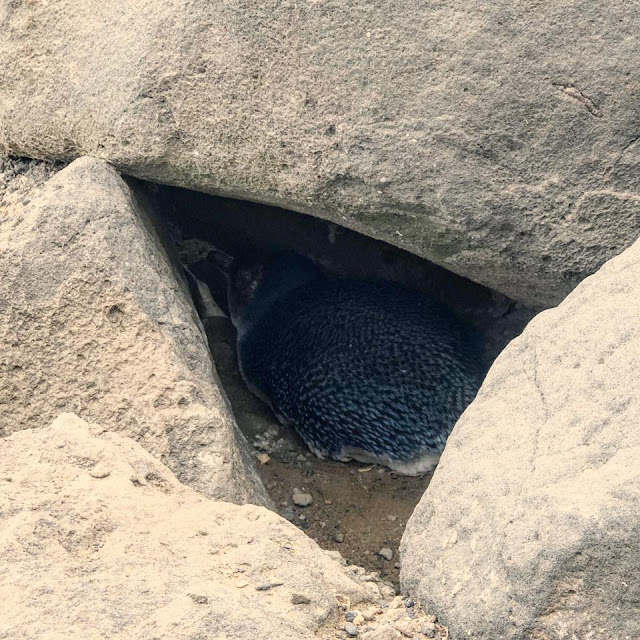 220 Thursday Caught the tram into the city for coffee and a walk, then collected the car and took myself off to Ramsey Street. It's a 35 minute drive out the city and is just a suburban street, Pin Oak Court, much shorter and narrower than it looks on TV and they definitely use a lot of props to spruce the gardens up. They only film there once a week. Late afternoon we visited the graffiti/street art areas of Melbourne, had dinner and spent the evening in the apartment. 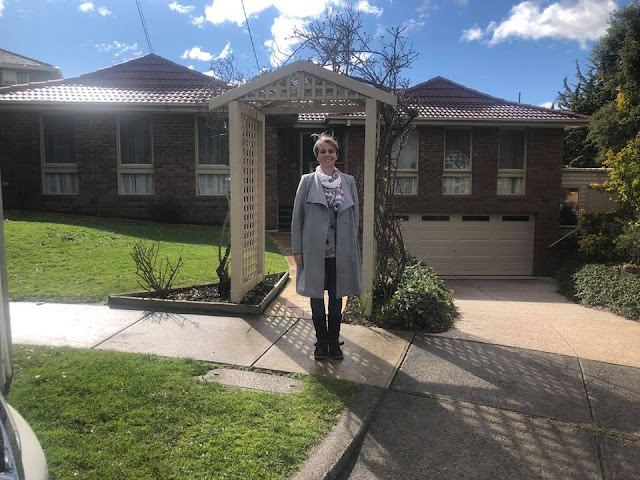 221 Friday I went out at 9am and caught the tram to Flinders Street and walked 25 mins to the Botanical Gardens, then visited the Aquarium, spent the afternoon in the apartment and went out for dinner, our last night together.

Photo from yesterday as I wanted to share the street art/graffiti with you, it was just over the road from the aquarium. 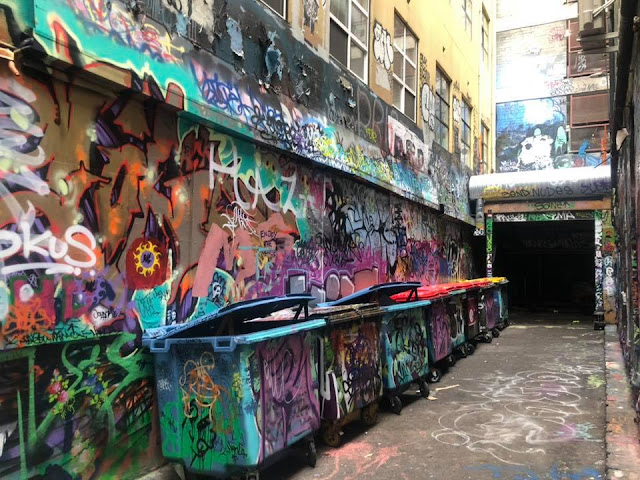 222 Saturday A long drive (700kms return) to drop Jamie at the farm where he is working for the next 6 months. It was really weird saying goodbye to him with no knowledge of when I'll see him next, you just never know where he'll pop up or when I'll be able to travel back out here. Got back to the apartment at 6pm, having left at 8.30am. 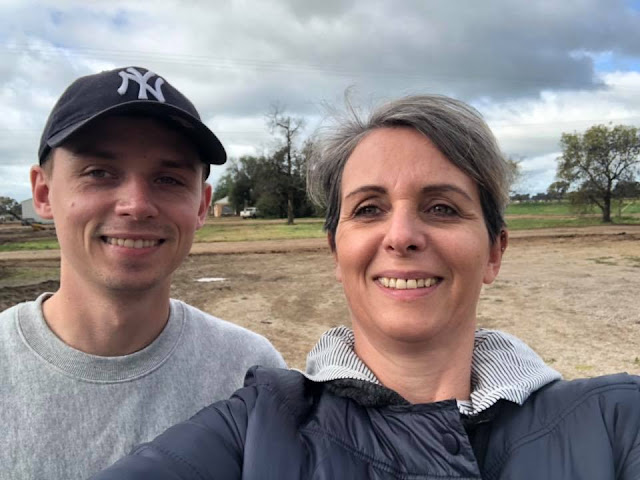 As they say in Australia 'Hey Tosser, put it in the bin' Find out what a bin chicken is?
The road trip: A 2 night stay on Phillips Island.


You are invited to the Inlinkz link party!
Click here to enter
Posted by chickenruby at 15:04:00