I abandoned a food shop on Thursday in Marks and Spencers due top lack of social distancing. I made it through the chilled aisles and then joined the queue with a joint of beef, cheese and milk.
There was a woman queuing up to purchase 1 mango, with her adult daughter who was buying 1 packet of sweets. There was also no way I could maintain 2ms distance at the tills, there was a rope behind me and I was told to move forward to let people pass behind me.
I made a complaint to the woman at the door on leaving and was told they were following government guidelines and only had 37 of the allowed 40 people in the store, the time I was in there.
I have been going to Waitrose once a fortnight and the local Londis once a week to top up with milk and to buy and post my mum a TV guide and some sweets in between the online food shops I have arranged for her.
I'd opted to go to M&S as I wanted to buy some bits and pieces for care packages and birthday gifts for family members in poundstretcher and poundland and decided to visit the retail park to minimise the amount of time I was out and the number of people I came in contact with.
It seems that a lot of people think if they are wearing a mask and gloves it's ok to literally barge past you, or wear a silly grin and tiptoe. I'm not sure these are proven methods to prevent the virus from spreading. 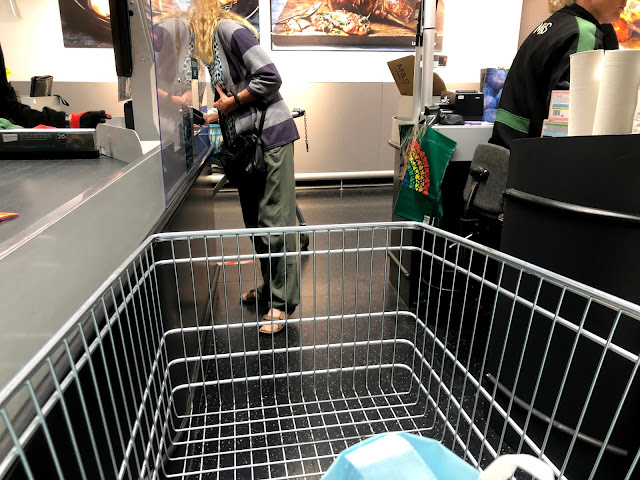 I also made some outdoor social distance visits to deliver care packages to family and meet with 2 separate friends on 2 separate occasions. We stayed outdoors, maintained more than the 2ms distance requirements and for less than an hour.

It did mean I left my local area and travelled 35 miles to make these visits, sadly I passed very close to the Welsh Border and where my mother lives, but I didn't go and visit her as she is on the vulnerable list due to her age and I'm not allowed to enter Wales. On Friday there were police road blocks between the Forest of Dean and Monmouth.

I did tweet about my trip on Friday, there have been a few sub tweets aimed in my direction. But I was well within the guidelines of what I could and couldn't do.

I certainly felt safer and more at ease not just because I was meeting with people I knew and could trust, but I was meeting with them in an open space, I took my own deckchair, drink and snacks and the gifts were handed over wearing rubber gloves and after I dropped them, I retreated so they could be picked up.

Have you met up with anyone outside your household? How do the meeting go?