Last year's Earth Hour 2015, we sat in Safa Park in Umm Suqeim, when they switched the lights off over Bur Dubai and the Burj Khalifa. Due to ongoing and 24 hour building works and the sheer height of the buildings in Dubai, many lights have to remain on for safety for the workers and of course for the planes.

This year Peter and I headed off to the beach in Umm Suqeim at the bottom of our road, the one we spent New Year's Eve on, to witness this Earth Hour 2016 as they switched off the lights on the Burj Al Arab.

The green lights in the photo are again left on for safety as there is a harbour wall and there were lights out at sea to warn of rocks. 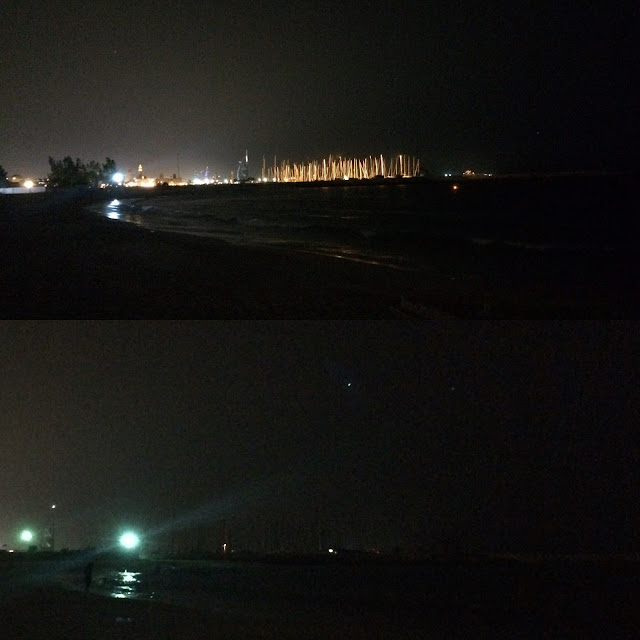 This year it was more dramatic. In the top photo you can see the Burj Al Arab at the left of the orange poles, which are the masks on many yachts, lit up. To the right of the poles is the Atlantis Palm.

In the bottom photo, lights off. I was in a different place when the lights went off, the Burj Al Arab in the bottom picture is to the left, between the two green lights.

Peter and I took a stroll along the beach, but sadly it wasn't as dark behind us, again all the safety lights of the city were still on and the mosque on the beach front was lit up brightly, although the beach lights had been switched off.

If we are still in Dubai this time next year, I want to go down to the Marina to see what happens there, it is further away from the airport and not quite as much building work going on as there is in Bur Dubai, but who knows? I'll let you know.