6 days in Bavaria. Places to visit, things to do.

I returned from a trip to Wolfratshausen, south of Munich, where I stayed with friends, in July. I last visited in 2016 on this visit they lent me their car to allow me to explore further afield during the week while they were at work. 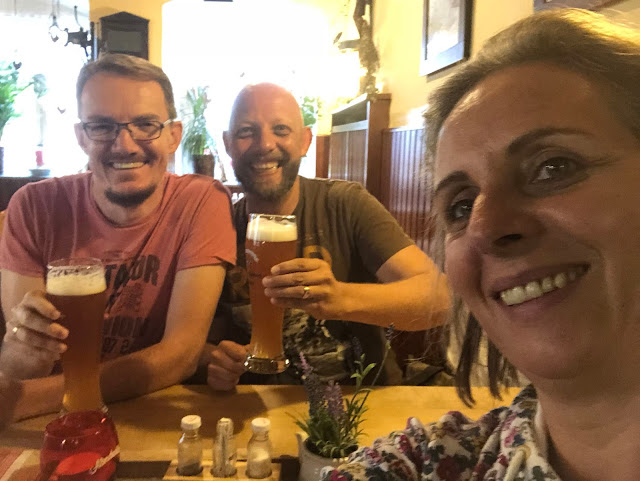 On the weekend we visited castles, Christmas shops and attended a Medieval festival and in the week I explored the town where they live, on foot, caught a train into Munich, drove into Austria through the Alps and visited the local lakes while my hosts were in work.

I visited here in 2016, so wanted to explore new places and revisit in further detail some of the other places I'd already visited.

It's not expensive to visit the attractions in Munich, a few euro to enter museums and churches were free, although a donation is welcomed.

As I've lived in Dubai for the past 3+ years, the driving was easy for me, although it's been a long time since I've driven a manual car and some of the villages in the Alps proved tricky with testing my hill starts. Before entering Austria I had to stop at a garage and buy a 'vignette' to allow me to pass through the tolls freely. The road signs were easy to work out, I set my GPS before I left each day, downloaded an app called 'visit a city' and was able to download routes and places to visit in advance. I had a data package on my phone and there was plenty of free wifi. 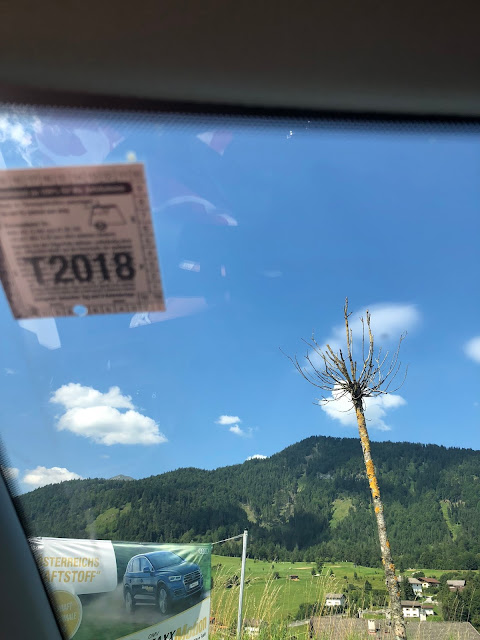 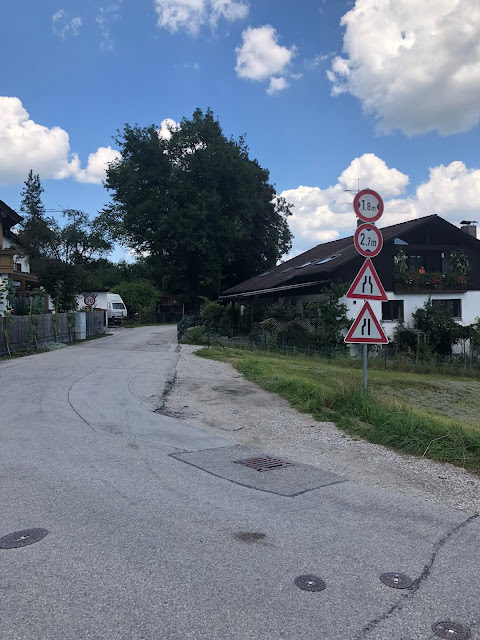 There isn't a lot of English spoken in this part of the world and as I don't speak any German and had difficulties with translating the menus, I lived off Mozerella and Tomato sandwiches when I was out. When I asked for a latte I received a Latte Macchiato, which I wasn't too fond of, so stuck with the international word for cappuccino. I got by with miming and pointing and managed to buy train tickets as the machine had an English option and all announcements were in English and German. There didn't appear to be a return ticket option as the prices vary according to the time of day one travels. The S Bahn was undergoing works and my journey time was doubled. 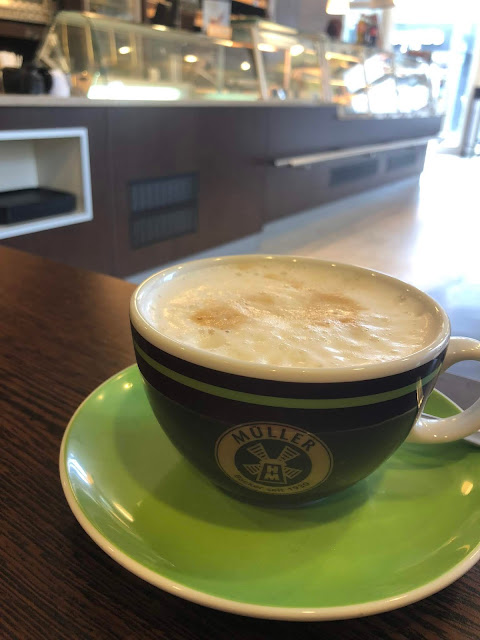 There are so many things to see and do in Munich, Wolfratshausen and surrounding areas. All churches are free to visit and most of the attractions only charged a few euros to enter. Most of my spend was on public transport, fuel, coffee and food. In a couple of places my credit card wasn't accepted and my debit card declined as they only accepted local cards, which was awkward when I insisted on paying for dinner one night.

There are a lot of things in Bavaria that I find strange to see, I tend to notice more things from living abroad and always wonder when I visit new places what it would be like to live there.


There are maypoles in every town 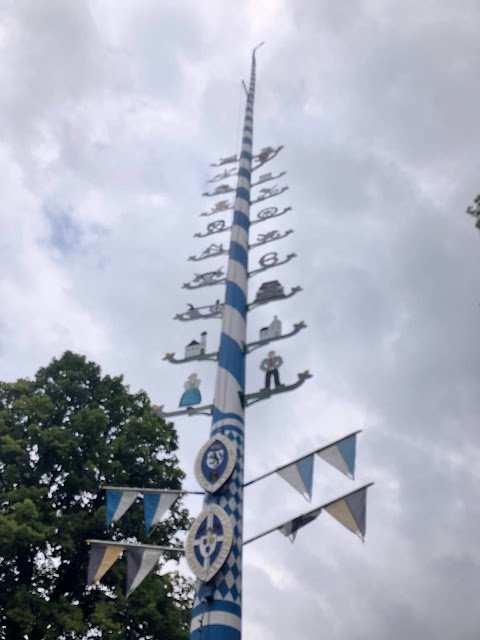 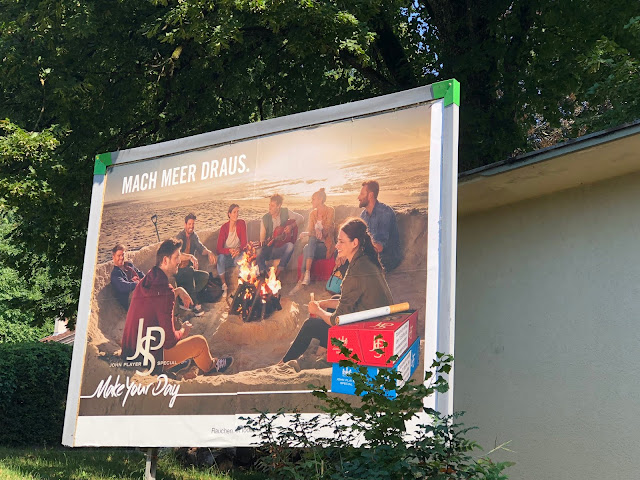 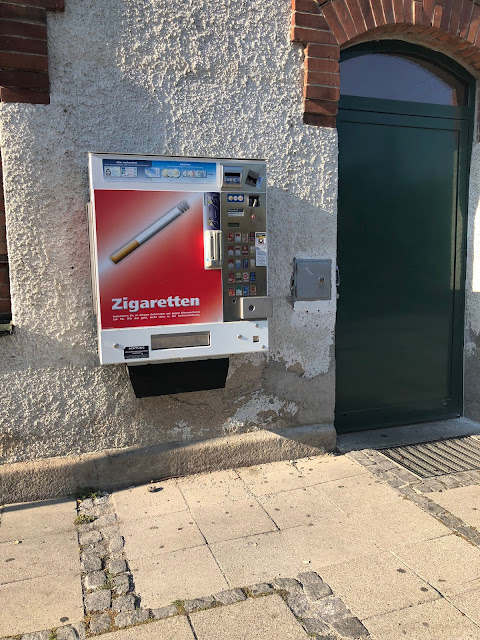 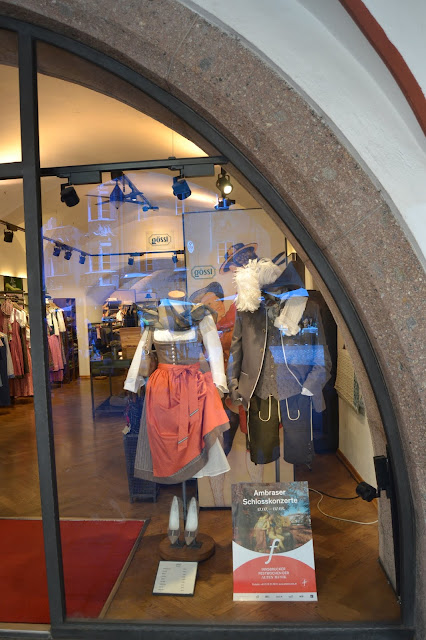 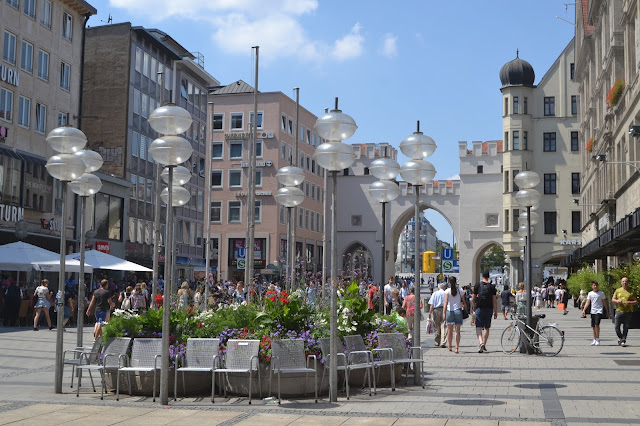 All the buildings are beautifully decorated 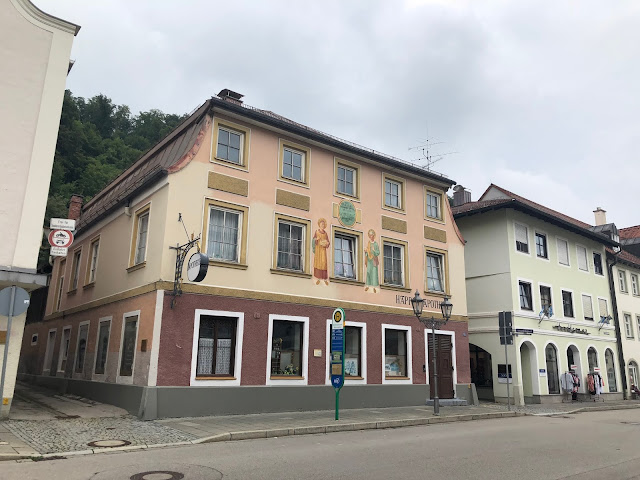 If you want to see the places I visited and get some ideas of things to do in this part of the world, then please feel free to click on the links below: 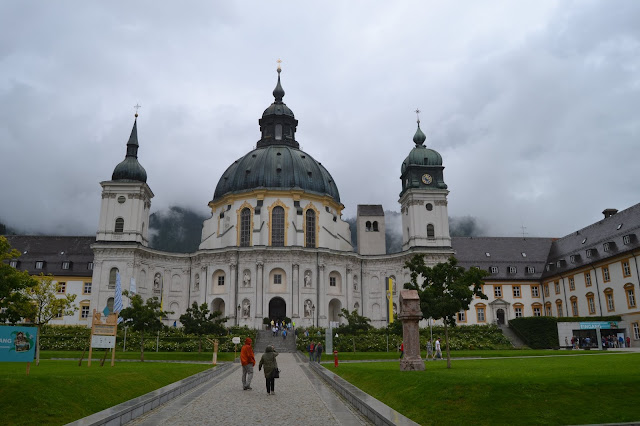 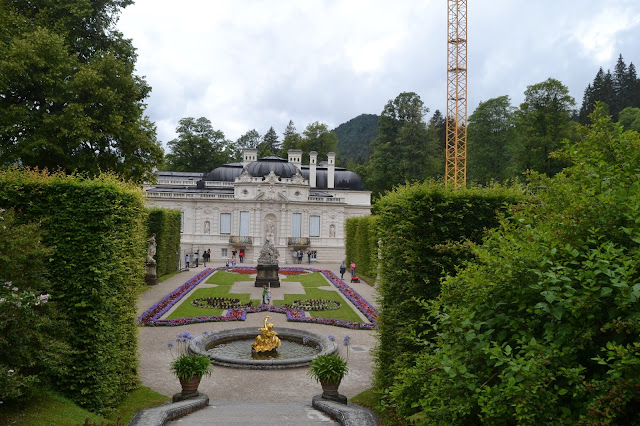 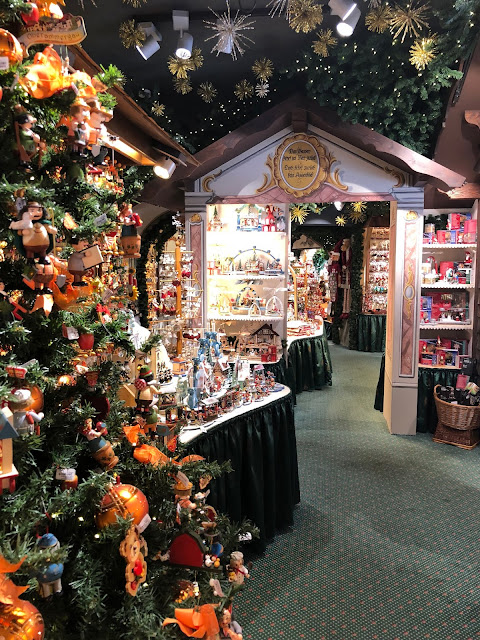 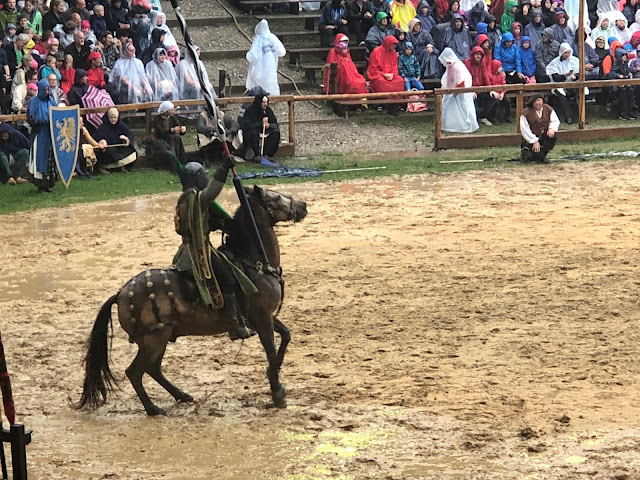 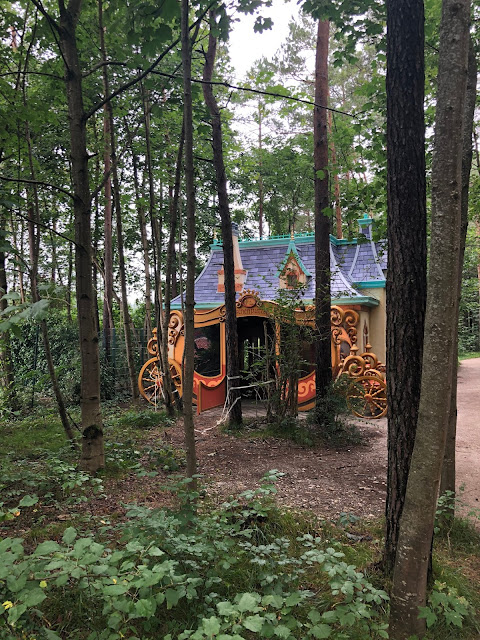 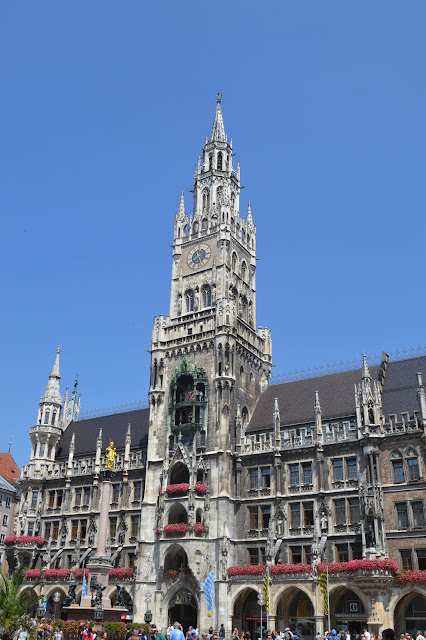 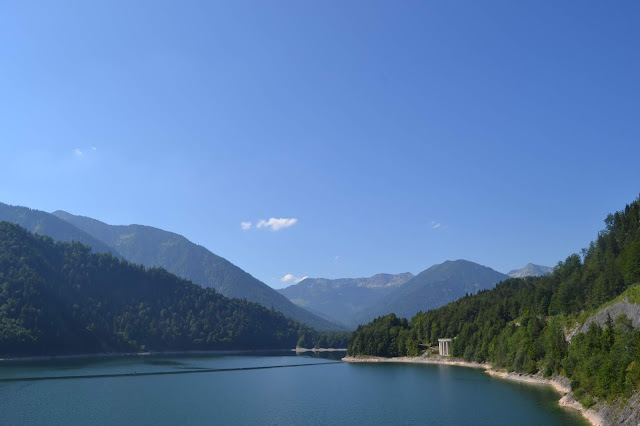 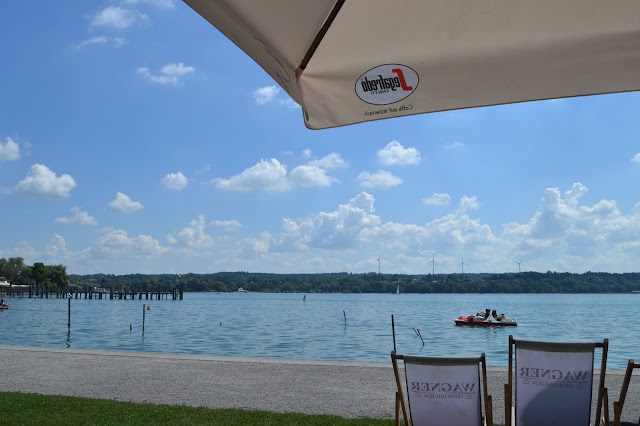 Dachau Concentration Camp is located 30 mins by road and 40 mins by public transport from Munich, it was a very moving experience to visit, but not for the feint hearted, it was an extremely emotional visit.

I'm looking forward to my next visit, hopefully in the summer of 2019, I'd like to venture further afield and explore the neighbouring countries some more. I did pop to Italy for an ice-cream in 2016.