Marshalling on the European Tour. The Race to Dubai 2019.

I'll start by declaring I don't play golf, know much about the players or even the game, but I do love being out and about, meeting people and volunteering. 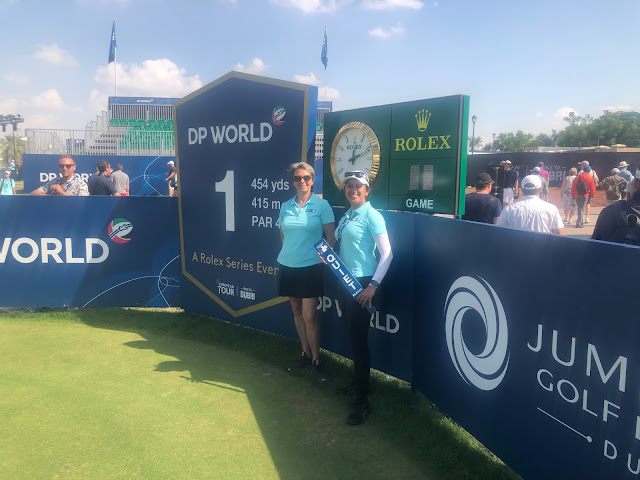 Living as an expat restricts my ability to work. We've chosen for Peter to work and for me to support him and the family. This means taking on a permanent job is impossible, so instead I blog, write, have regular weekly activities in Dubai I take part in and volunteer when I can.

I've always volunteered, from school PTA, to the kids sporting and after school activities, to education projects in South Africa and more recently in the last 12 months at the golf on the European Tour in Dubai and Abu Dhabi.

Part of the European Tour is the Race to Dubai, which starts next week in Malelane in South Africa, there are points awarded for finishing and they accumulate to the final event in Dubai at the DP World Tour Championship. With a prize fund of $8,000,000 it's the biggest win available in golf.

The European Tour takes place over 48 events in Europe, Africa, America, Asia, Australasia. There are also 8 tournaments that are part of the Rolex series. As well as the prize fund for the tournament, the winner is also presented with a Rolex watch.

We started watching the European Tour when we lived in South Africa and visited Sun City in the event prior to attending the DPWTC, we added the HSBC Abu Dhabi tournament and the Omega Desert Classic to our list of events to attend and from there I discovered the marshalling.

On tournament days this is as close as you get really to the players, they don't talk or interact and a successful marshal is one who the player and caddie say hello to and thank you at the end of the round, anything else usually means you've done something wrong and I'm pleased to say I only got shouted at by one caddie for kids screeching and running around in the presence of their parents, I think he understood it was out of my control, he was just frustrated., so was I.

My view of Rory McIlory and Mike Lorenzo Vera, the leaders on Day 3 from my position on the 17th green. 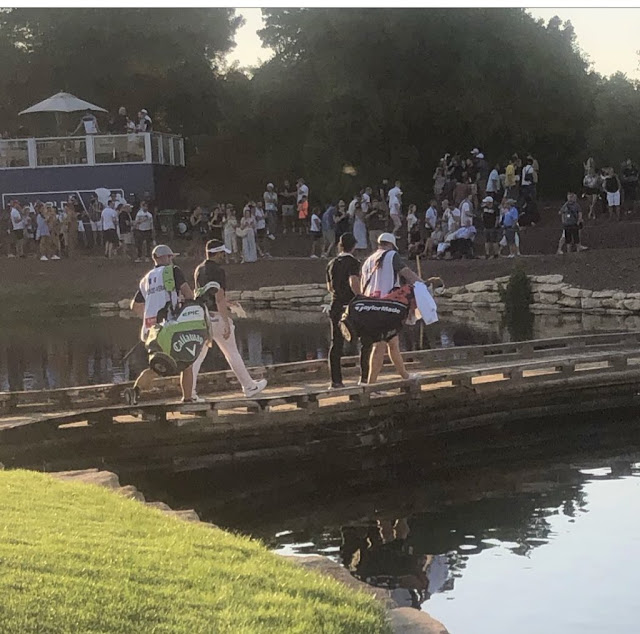 Rory up close on the 9th green, we do get some time off to watch the golf, but as we're in uniform we're expected to help so taking photo's has to be quick and definitely not when we're marshalling. 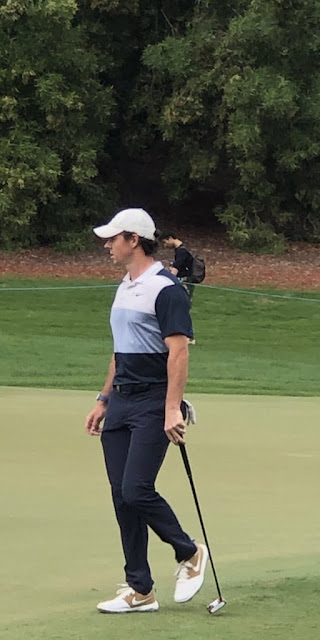 There are so many roles that can be taken at the tournament from being static (manning a crossing) or travelling (walking the course with the players) I've done both. Walking with Sergio Garcia last week on the ProAm day to spotting the ball on the 17th green. walking with a group. All I had to do with raise a red flag if the ball landed in the water behind the green and inform the player if it went straight in or bounced first, so they knew they had to take a second shot. All the balls landed on, near the green and the two water shots were in the front so the players knew they had to take a second shot from the drop zone and not from the tee. I got to watch that hole up close and personal. 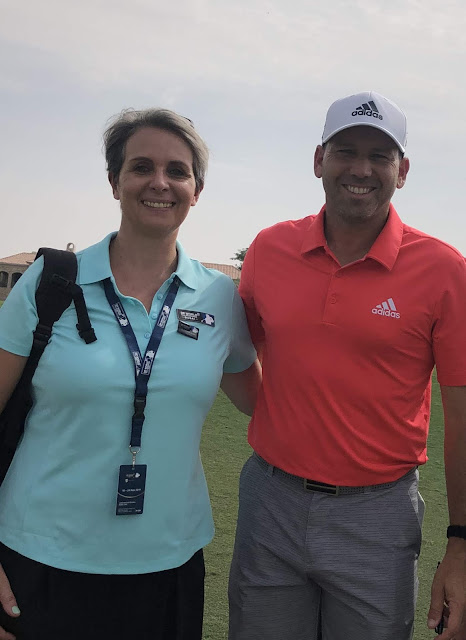 I don't actually get to see much golf as the static positions at the crossings, or manning the first tee or covering the 18th green mean I'm there to manage the crowds so my back is to the players and I rely on the crowds expressions to know how well the hole went. 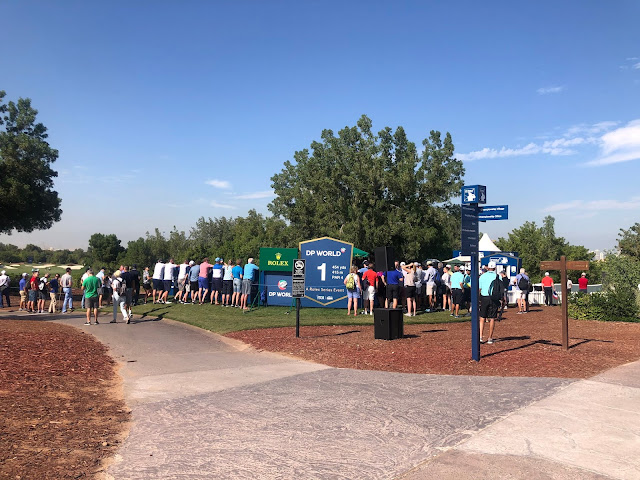 On the last hole, as Marshals we sit on the green and get to enjoy the final hole, made even more exciting by Jon Rahm, winning the Race to Dubai, the DPWTC title and the Rolex series on his final putt. 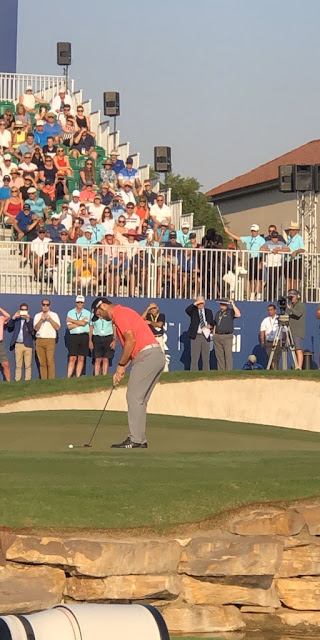 You also get fab views like this of the Presentation. 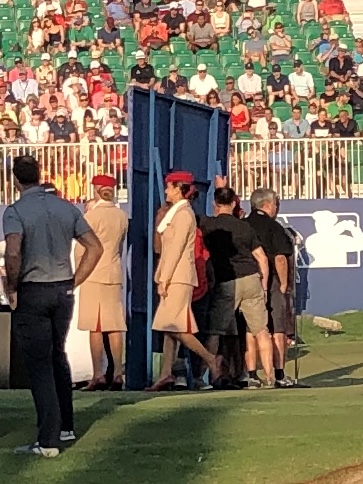 The winner posing for photos with the marshals. 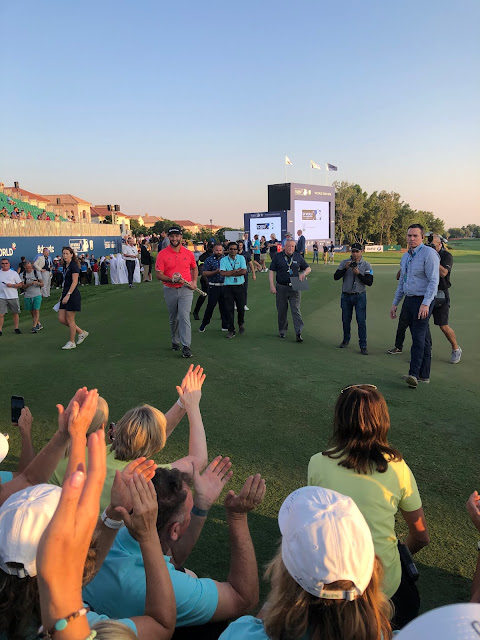 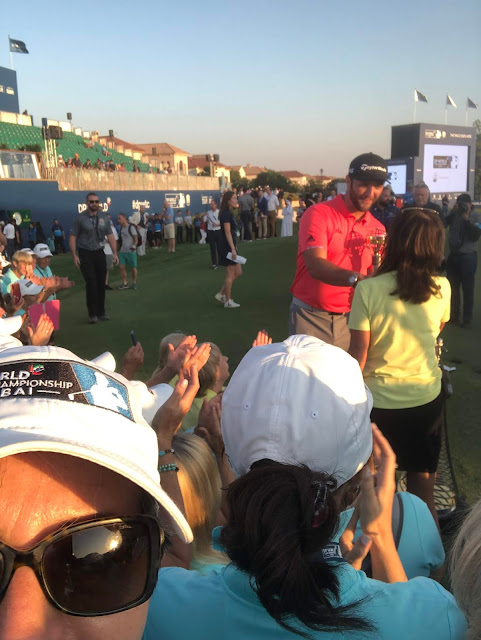 Next up is the HSBC Tournament in Abu Dhabi and the Omega Desert Classic back in Dubai, so if you like golf or just seeing if you can spot me on the TV, tune in. I'll be there.