Over the past 3 years I've been spending half the year in the UK in the same town as the 3 year old. He's been to my flat, always asks where Uncle Peter is, points at aeroplanes and asks his mummy if I'm up there. He must think I actually live on a plane.

Thing 3 looked at me the other day when his mum opened the door and said 'who that?'

I was gutted, Thing 2 said 'it's Aunty Suzanne' and his little face slowly broke into a grin.

Since they've been born I'd see them maximum of twice a year for no more than a few weeks at a time, we'd keep in touch the rest of the time via skype, face book and letters from me. They'd draw me pictures, we'd take photos.

I've not seen the Things since I was last in the UK in February, 5 months is a long time in the world of a 3 year old, it's the longest time we've gone without one another. Let's hope it's not that long till the next visit and as for Thing 4, she's only 10 months old, there is plenty of time to start to get to know her properly.


Taking his spoils indoors to show the other Things. 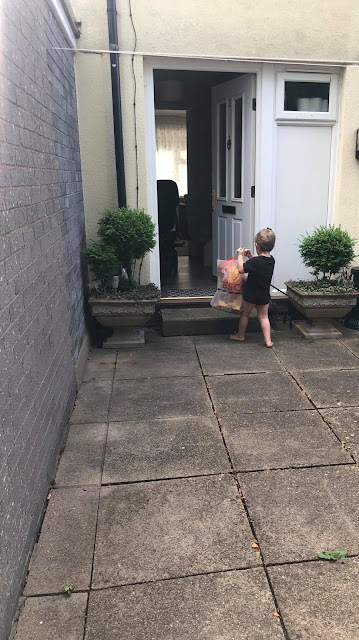 *The Things are affectionately named after Dr Seuss 'The cat in the hat' Initially just Thing 1 and Thing 2 so I didn't use their names online.