Paying agents to do a job, badly

I'm pissed off, totally, at the point of having a breakdown.

I'm pissed off because my container is delayed because the agents didn't submit the paperwork.

I'm pissed off with all the work I've had to do to our family home because the agents didn't manage the property and the tenants and submit the correct paperwork to the Deposit Protection Scheme.

I'm pissed off with paying agents/professionals to do a job that I am unqualified to do, which turns out that I am actually qualified to do as I'm the one who has to sort it out and draw on skills and intelligence I didn't know I actually had.

Let me tell you my shipping story.

It began in Dubai early September, I obtained 3 quotes, all the same price, all offering the same service. I did a google search, I asked on twitter. I made a decision.

I picked the one who said they could ship on September 10th.

The ship didn't sail till October 2nd. I spent from the day they packed until September the 22nd asking for the shipping details, until they finally said the container was loaded.

By then I was back in the UK, I googled shipping lines and discovered the ship didn't sail until October 2nd.

I also paid them nearly £500 for the shipping and breakage insurance, I filled in all the forms and sent them off and made payment on September the 9th.

The company made out they were doing me a favour by refunding me the money. I'm still waiting for the refund.

My container was still at sea. During this time, an attempted hijack was reported off the Isle of Wight of a ship and a container fell off another ship near the coast of Weymouth.

There are many things I would be unable to replace such as photographs and the children's keepsakes, but should my container have been hijacked or fallen in the sea I wouldn't have been able to claim for loss of furniture etc.

My container arrived in Port on November 8th, with a customs clearing time of 5-12 days, after day 5 I am to be charged storage fees.

On November 6th I made yet another call to the UK agents who still hadn't responded to me to let me know the process. I explained I needed to get back to Dubai ASAP and they said they'd be in contact as soon as they were informed the container had been released.

On November 17th I called the UK company, no response, finally they replied to my email on the 20th to say as soon as they heard they'd contact me.

On the 23rd, Monday this week. I phoned them up again, the container hadn't been released. It was now day 17, so I called the National Clearing Hub, the Port and UK Border Force who all informed me that my container had been cleared on the 17th November, so why hasn't it been collected?

I called the UAE company, no reply, I called the UK company, no reply. I sent emails and whatsapp messages and over the past 2 days I've had the UK agent tell me it's not her fault and she's working hard to resolve the issue. I contacted the shipping line to be informed the Bill of Lading, bascially the Inventory hasn't been sent to them.

Finally the UAE side replied, the agent was almost crying on the phone, I will do I promise, please let me sort this out. The receptionist sends me an email to tell me shipping company have received the Bill of Lading.

Shipping company email back this morning, they still don't have it. UK agent not answering phone or responding to emails. Call whatssapp number in Dubai, woman answers, she is agents and receptionists boss, she tells me Bill of Lading has been sent, it is the shipping lines fault, we argue, she patronises me with Lady, My Dear and Inshallah, she implies she was will sort the issue in 2 days, Inshallah, maybe a week. It's a 3 day National Holiday in Dubai next week, they're 4 hours ahead, the end of the working week is tomorrow, so to stand any chance of getting my container by Monday when I need to fly has to be resolved by 5am UK time tomorrow morning.

I tell her I have email from shipping company, all she has to do is reply to their request. She replies and copies me in.

'We have long correspondence with your office here in Dubai asking them to submit to our agent at your end the original Bill of Lading.

She then gives the name of the person in Dubai and their contact details and asks the UK side to sort it out as she has had no luck.

I'm pissed off because the UK agent knows they should have this paperwork before they can collect the container, the shipping company because they know they have to present the paperwork to the UK side, the UAE agent for misleading me all the way through.

I'm pissed off for no one taking ownership of the problem.

I'm pissed off for people making out they're doing me a favour to resolve their mistakes.

I'm pissed off because if everything had gone to plan, my house sitters would've arrived October 22nd, the container would've been delivered and unpacked on the 48th day and I would've flown back out to Dubai to see my husband the first week of November and would no longer be stuck in the UK during Covid on my own.

I'm pissed off but would've been less pissed off if the paperwork had been processed correctly as I would have flown back to Dubai the end of last week.

I won't have time to unpack now and I'll find out when I do in February if there is any damage and all the agents will be long gone by then and I won't be able to make any claim against them.

The only bonus is that I'm now staying with my son and his wife in Northern Ireland, that I haven't seen since February.

Thursday 26th November. Shipping container cleared for collection. The Bill of Lading was finally supplied. To achieve this I enlisted the help of two random strangers from the internet who responded to my pleas for help, who worked together in both Dubai and the UK phoning my agents and the shipping line to get the matter sorted on my behalf, for which I am extremely grateful.

Friday 27th November 16.41 No response from UK agent with a delivery date. Yesterday they said delivery was booked for December 10th. Now that is a normal time frame after the container being cleared around 10-14 days. However as my container was actually ready on November 17th, it should be delivered Monday or Tuesday next week, which would be in time for me to fly back to Dubai as planned. They've said they'll do their best to get it sorted for then, but at this late stage of the day, when they're not answering my calls or reading the emails, I suspect it won't be happening.

In my opinion the agent in the UK should've realised that there was going to be an issue and not left it a week before finding out what was going on, in fact it was only because there were 13 of us calling her that eventually something was done, but it wasn't good enough. It wasn't them that sorted it, it was me and the online help i received. Basically the agents in Dubai didn't pay the seafaring bill, although they claimed they paid it on October 11th, yet on 24th November they emailed to say the shipping company hadn't invoiced them yet, a week after the ship docked in London.

I'll update further on the delivery date once I'm informed but I suspect I won't be going back to Dubai for a while yet.

Container being delivered Sunday 29th November. It arrived at 7pm and my sofa is in the neighbours garage until February when I return to the UK. 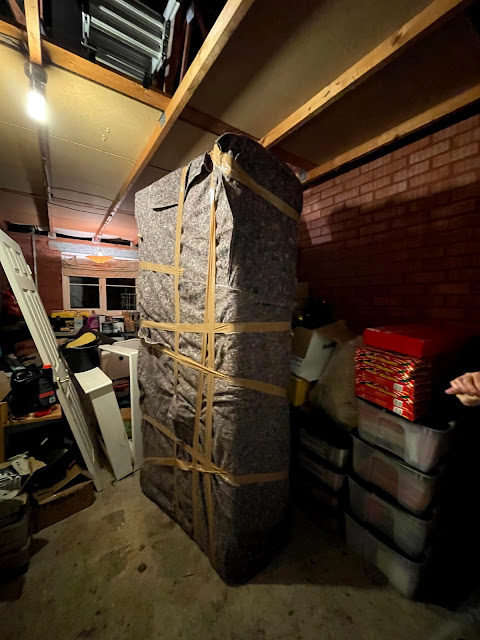 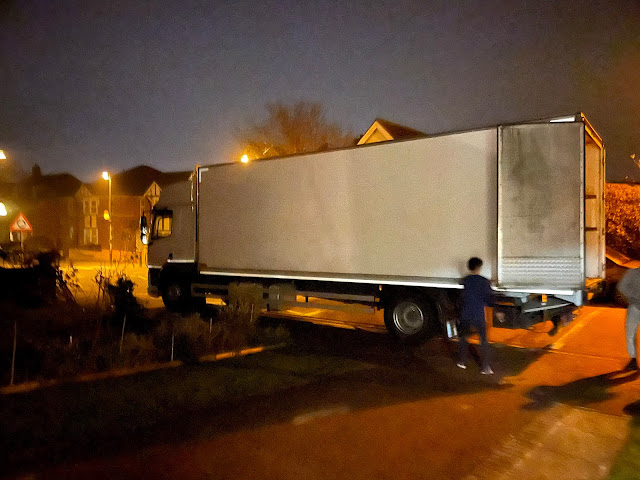