Why wont London 2012 just give me an answer

Over a month since I wrote this post, 2 weeks after the Olympics ended and 2 days after the paralympics begin and my application as a games maker is still 'under review' how hard is it to send out an email to say 'thanks' 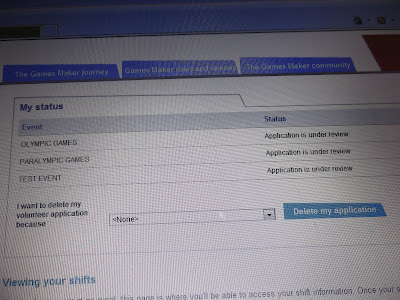 I don’t expect to be given a role as a games maker at this stage in the day, but I do expect some communication from London 2012. If I am offered a role it will cost me the best part of £3000 in flights, accommodation, travel and living expenses.
I volunteered as a Games maker for the London Olympics 2 years ago. Since then I’ve been told I have an interview, moved to South Africa, had a telephone interview. Not been notified by April 30th as promised, instead sent an email on May 4th to say, please be patient ‘we’ll let you know by June 30th’.
During that time my application for the main games was withdrawn, it took until July 5th to have it reinstated. The same day I received another email to say ‘thanks for your patience we will be in touch’
Since then I’ve emailed to which I’ve only received an automated response and telephoned to ask for further info and to explain I’m based in South Africa, I need to book flights, accommodation all, if still available, at considerable cost to myself.
I’m not expecting a role, I’d just like to know what my situation is. On Friday 20th July, I was informed I’m one of about 100 people still waiting to be allocated a role and may get an offer of the Paralympics. Today 23rd July I’m told that the area I’ve been assigned to has been notified of my keenness and the unanswered emails have been addressed with the relevant department. I am now on my 3rd Case ID number since July 2nd.
The games maker zone has not been updated, I check regularly, that’s how I found out my application had been deleted. There is no contact.
I have now missed out on the opportunity to purchase tickets for the London 2012 Olympics as I could not afford to fly to the UK for the games and then either stay for 6 weeks if I got offered a role at the Paralympics or pay for a return flight should I be notified late in the day. My adult son in the UK is attending the technical rehearsal tonight with a ticket I was given as a sweetner.
I’m not expecting a role; I am concerned that I may have missed out on a role while my application showed as withdrawn. My husband has cancelled an important meeting in Europe due to the uncertainty of a role at the Olympics as we have no child care or family in South Africa and cannot afford to pay for the children to return to the UK at the same time.
I’ve had 600+ hits on this blog since 5th July. 163 hits on this blog since 20th July. Yet I get no response from London 2012. Can you help?