All the about the Penguins 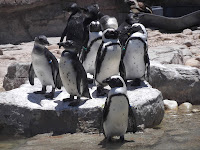 We spent the morning at the Lighthouse and Penguin sanctuary in Port Elizabeth.


This is Arg, he is a special needs penguin. 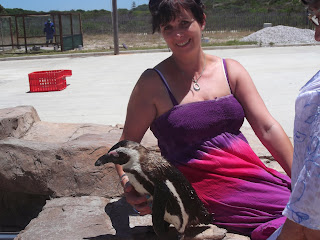 They believe he is brain damaged after underwater explosions and he was in the vicinity and was stunned by the shock wave. He was found on the beach and taken to SAMREC. South Africa Marine Rescue and Education centre. Unlike the rest of the penguins there is little chance of rehabilitation and he will remain at the sanctuary for the rest of his life. There is another penguin called Jay who they’ve tried to release several times who seems to think the water is too cold, he dips his toe and returns back up the beach.
There are many reasons that more penguins are being brought into the sanctuary and they are because of man. The seas are getting warmer which means the penguins have to swim out further to get food for their young, by the time they return they’ve used up the food in energy and there is nothing left to regurgitate, meaning the chicks aren't getting enough food. Also man has harvested the guano from the rocks to use as fertilisers and other chemical derivatives eg certain industrial disinfectants.  Penguins are also being affected by pollution, carrier bags, plastic drinking straws that they mistake for pipe fish and fishing wire and nets abandoned at sea.
In Boulders Bay, near Cape Town, on Foxy Beach, where we are heading next week, there is one of only a few on land Penguin colony and for a small fee you can walk on the raised platforms and see the work they are doing to protect the penguins. They have made them artificial housing just like they’d make for themselves from the guano in which they can lay their eggs without the fear of predators eating them.