Week 28 - My Sunday Photo. Fed up with Ramadan

I didn't plan it this way but I left Dubai for Canada the day before Ramadan and have been away for 3 weeks.

I returned on Thursday evening and needed a coffee and a smoke after a 13 hour flight. But it was still day light and the coffee shop at the airport was closed and it is illegal to eat/drink/smoke in public during daylight hours.

However there were people smoking, hubby was happy to wait for the sun to set (within the next 15 minutes) and while I then had a cigarette he queued for coffee when the Costa opened up.

Yesterday we went to the Mall, not only was every coffee store closed for business but the chairs and tables in the food hall had been put to one side. The supermarket was open, we shopped, I bought fresh bread, as I paid and in a moment of weakness, I automatically tore off a piece of the bread and popped it in my mouth, the very second I did it, I took it out and was mortified I'd broken the law.

Today we went to the Mall of Emirates. Most coffee shops were closed, however several were open for take aways and I've been told a lot of non muslims take their work breaks in the bathrooms so they can eat.

I find it very strange that there are screens around the food counters in the coffee shops that are open for takeaways, yet no screening at all from the supermarkets and as usual they were busy as you'd suspect on a Saturday in a major city.

The food hall at Ski Dubai end was open, this photo is one of the many screens covering the entrance.   Hubby had some lunch and I wanted a coffee, but they don't sell coffee in the food hall. 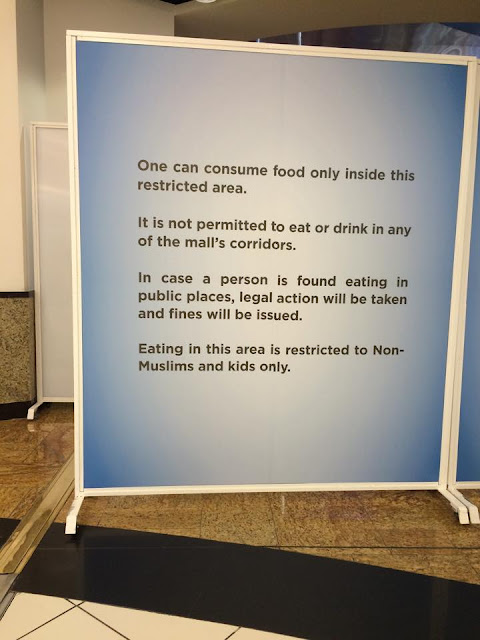 I've chosen to live in Dubai, a Muslim country and I am more than happy to live by the laws of the country I live in. To be out in a city centre on a weekend where there are no gangs of youths, no one swigging alcohol from brown paper bags, no fear of any danger or risk is truly wonderful.

My first thought about this was New Years Eve on the beach in Dubai. There were 17,000 people on the beach watching the fireworks at the Atlantis. Can you imagine that number? Now realise that not one single person had consumed alcohol and understand why I'm happy to obey the laws of the country I live in. No worries about something kicking off, no worries about getting caught up in any violence, no drunken youths spoiling our night.

The local papers, websites, employers, social media and the government issue guidelines for behaviour, eating and drinking and what you can wear and can't wear. They also make it quite clear that this is 'The Law' not a recommendation.

So why am I fed up with Ramadan? Because people are flaunting the rules. I can only assume that the two young men eating and drinking outside Carrefore were tourists and they were approached by security. The many women with strapless tops and cut off shorts must have also been tourists, I mean if they lived here they'd know the law, wouldn't they? Or are they just complacent?

I'm assuming that almost 100% of people who arrive in Dubai, do so by air, yet I didn't see one sign or poster or leaflet letting visitors know it was Ramadan and what to expect and to obey the laws. Nothing was mentioned on the plane prior to landing and when I received my email from Emirates to remind me to check in the day before I flew, there was no additional notification about Ramadan.

Perhaps I missed it all, perhaps it's not deemed necessary as after all what kind of mad tourist comes to Dubai in the summer anyway?

So maybe everyone who I've seen inappropriately dressed, smoking or eating and drinking in public during daylight hours lives in Dubai and thinks they are exempt from the law?
Posted by chickenruby at 22:02:00