I'm back in work on Sunday, it's the first working day of the week here in Dubai, a country that I wasn't all that keen on when we moved here, however after a year it has started to grow on me, we've made friends and more importantly I've landed myself a teaching job. I wasn't working when I booked the teens flight out and the 23 year old booked his, so I'm a little sad to be missing out on their last week here, but Peter has taken leave for the rest of their stay and I've hired a car so I can get back and forth to work while they drive off to Hatta, Ferrari World, etc.

We were without internet on the beach and noticed how the Burj Khalifa was engulfed with what we thought to be cloud, sadly on our return home we discovered it was smoke from the Address Hotel.
This photo was taken at 5.30pm yesterday, 20 hours after the blaze started. The fire damage is much worse than first reported and it's the 4th major fire in Dubai in 2015. 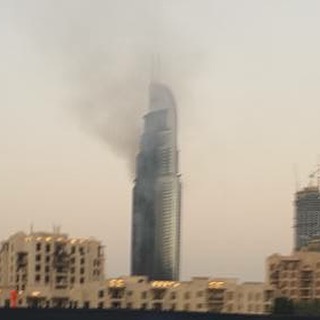 The firework display from the beach lasted over 40 minutes, starting at the Burj Khalifa, viewed from the back, and the Atlantis.

And stretched out into the sea

Finishing with a huge finale at the Burj Al Arab


Hope you enjoyed the show, we certainly did, we thought last years fireworks were spectacular, this year's was just mind blowing, can't wait to find out how we are going to end 2016.
Posted by chickenruby at 19:17:00