I was disappointed that Soweto exceeded my expectations... 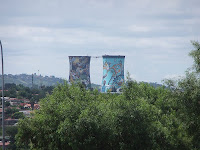 or bullet holes of Soweto....or walking in Mandela's footsteps.

A colleagues of my hubby offered to take us into Soweto to show us where he was born and raised.

We met him at the services on the N1 and he hoped behind the wheel of our car and drove to Soccer City. Such an iconic/familiar sight of the World Cup 2010. 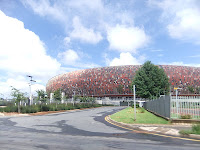 We drove round the outside of the building, stopped for a few pictures then drove into Orlando East to the Hector Peterson museum.

Hector Peterson was a 13 year old boy who was shot and killed on June 16th 1976 in the Soweto uprising, after the government tried to enforce all teaching in schools to be in Afrikkans. Hector's body was carried by Mbuyisa Makhubo (an 18-year-old school boy and a photographer, Sam Nzima, snapped the picture of them along with their sister, which came to symbolise the people's struggles. 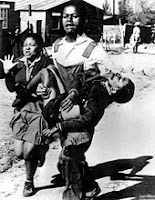 Inside the museum there is a quote from the children's mother saying that her son was not an icon in life, therefore should not be an icon in death.
I left the museum struggling to hold back the tears, any child identified of school age was a possible target and kids as young as 6 were shot by snipers.
Obviously as in any war/battle/conflict there are two sides to every story, but this was the people of Soweto's.

We then drove to a Catholic church, Regina Mundi, despite faith, this was the church where all the funerals of the Soweto uprising were held, it is also where the Truth and Reconciliation Commission hearings were held between 1995 to 1998, presided over by Archbishop Desmond Tutu.
The church was often used for anti-apartheid activities that were banned in South Africa at the time. 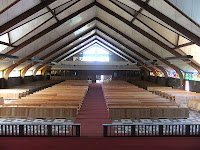 During the Soweto uprising, students sought refuge there, but were stormed by the police after tear gas was thrown inside and fired bullets in the church. No one was killed although many were injured and the tour guide was more than happy to point out the bullet holes in the ceiling. 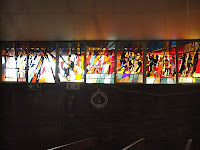 The stain glass windows depict the uprising and the death of Hector Peterson and the church houses a painting of the Black Madonna by Larry Scully in 1973. I'm sure the guide does this with everyone, but he placed me where Mandela stood. 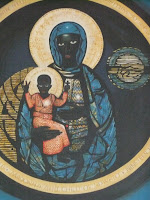 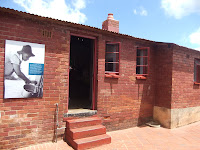 WOW....going back to the title of my blog, I wasn't disappointed with the house, the street or even Soweto, I had a set of expectations that were much lower. Have you ever been to the Louvre? Seen the Mona Lisa? People tell you it's a small painting and until you see it you can't explain how small you thought it would be...it's the same with Las Vegas, it's big, but until you actually get there, what you imagine as being big, is nothing on how actually big Vegas is. It was exactly like that for me in Soweto so called as it is a South West Township. But Soweto isn't a township any more, the roads are tarmac, their are huge Malls, markets, petrol stations, car washes, banks, in fact there are parts of the UK that Soweto would put in the shade. The houses, yes houses, were smart, tidy, freshly painted, flowers in the garden, it was safe, felt safe as we drove, parked the car. My expectations of Soweto were low and they needn't have been.

Hubbies colleague took us to his Grans house, he told us she couldn't read and write and was determined that her children and grandchildren would have an education and they did including her grandson with a degree and a successful career in finance. He drove us to his Mothers house, she was away on holiday and her maid was looking after the house for the week.

I will be going back to Soweto, I want to go to a match in Orlando and at Soccer City. I shall be taking family and friends there to do the tour (all sign posted) we will have lunch there and do some shopping.