The importance of letter writing

I've seen numerous social media updates over christmas where people have posted 'thank you for all the messages, hope you all have a happy christmas and new year, sorry I can't reply to everyone'

Really??? Are you sorry you can't reply to each and everyone? Did you really receive THAT many messages?

'We've made a donation instead of sending christmas cards this year, so happy christmas all'

I hate seeing these updates, I don't mind that you haven't sent me a christmas card, but I do mind if you fail to acknowledge mine, just with a simple message on social media to say 'thanks for the card' and I do mind if you can't take the time to respond to a message or update I've tagged you in or sent directly.

Whether we write with pen and paper or write an update on social media we do it for the interaction, for a response, to share information, photo's of places or family, it's all about communication, which is a two way street.

If I write you a missive (10 page hand written letter) respond to it. As a rule the people I write my missives too send them back even longer, even if it's a typed round robin stuck in a card and not personalised, answer it, respond to it. The sender is looking for a response even if it's just a message on Facebook saying 'thanks for the letter/card' Don't just ignore it, that person has contacted you because they want or even in some cases need the interaction, want a response, want to be part of your lives.

The same goes on face book, don't assume someone's update is just rubbing your nose in things and ignore it, they are proud of theirs and their kids achievements and yes sometimes it may be a little exaggerated but they are looking for a response, give a random like or ignore, no worries. But if they've tagged you in the post it is because they want you to see it, they want a response, they are opening up the doors for communication, don't ignore it.

It's too easy with social media to pretend you're involved in someones life, that you've seen their updates and photo's, but how does that person know that if you don't respond?

People say they are too busy these days to write letters anymore, too busy to go on face book and click 'like' but not busy enough to post their own updates.

For 4 years we lived in South Africa, the Christmas we left the UK, we were homeless, having packed up all our worldly goods, what we hadn't already sold or given away and spent christmas touring the UK saying goodbye to family and friends, before moving 6000 miles away.
Last Christmas we were living in a Hotel in Dubai having moved there 6 days before christmas, but as with previous years we still found the time to write and send christmas cards as well as organise presents.

I've spent my week writing thank you notes, asking people about their Christmas and their plans for the year ahead, despite already having already said thank you on face book.
I've written and will be posting the birthday cards for January next week, February till June birthday cards will be sent back to my mum with one of the kids for her to forward on nearer the time and birthday and easter gifts, small toys for my niece, were taken over in September.

It's easier now the kids are adults they only want cash and as for the Mother's they will have flowers for birthdays and Mothers day, ordered online. They will phone when they arrive.

I don't send gifts, cards and letters to be acknowledged with a big thank you, I send them to show that despite living 1000's of miles away that you are important in my life and I'd like to think I'm important in yours. Sadly this isn't always the case, but I will continue to set the example and hope you follow the lead.

These folders contain every letter and card sent to us as a family since our expat journey began in January 2011. I also photocopy every letter I write before sending it. One day, to future generations, I hope it will be of interest, mapping their great grandparents lives abroad. 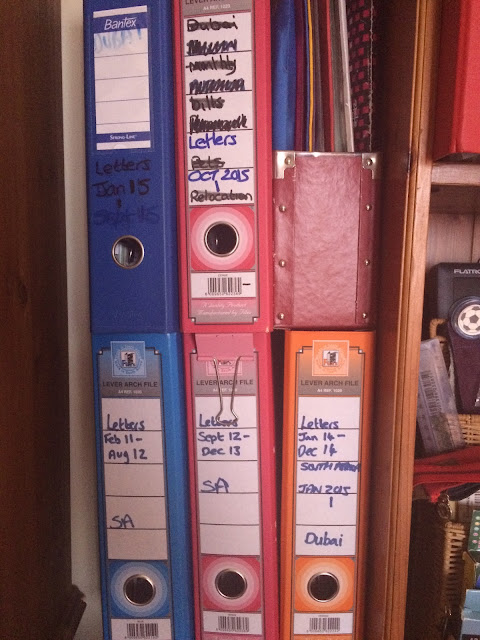