I asked earlier tonight for recipes as our family menu was getting a bit boring,http://www.chickenruby.com/2012/03/family-meals.html that's lasagne twice in 4days, so I thought I'd 'spice' things up a bit and asked twitter for suggestions and here's what they came up with.

@mulledred suggested stuffed peppers, but didn't suggest what to stuff them with and to go on the BBC website where you can input a main ingredient and it generates a recipe and sliced onions potatoes with juniper berries and bacon scattered over pork chops which have been sliced and garlic inserted, layer of potatoes, cover with stock and white wine, bake in oven. Any ideas where I insert the garlic?

I have a Balti chicken to make tomorrow and I'll blog the recipe, but first tonight's 'WTF are we going to have to eat? Lasagne.'

For all recipes involving mince I make a standard base.

I cook in a large pot, not a frying pan.

Tomato sauce base (or you can used 2 tins of tomatoes)

Boil water in a pan and drop in 1lb of large tomatoes, having hulled them first. As the skin starts to bubble, peel, chop and place in a bowl for later.
Use the water to make up 1/2 pint of beef or veg stock.

Lightly fry some garlic (to taste) add the meat and fry till browned, then add 2 finely chopped onions after a few minutes add the tomatoes, some puree, the stock and as much red wine as you can handle.

Place lid on pan and simmer until you're happy with the results.

This mince base can be used to make cottage pie (add chopped carrots and beans, put in dish, top with mash potato and cook in oven for 45 minutes)
or Spag bol (add chopped celery, mushrooms and cook for additional 10 mins and serve with either pasta or spagetti)

I tend to make enough base for all 3 dishes, and freeze the rest to eat later in the week.

To make into lasagne, prepare a white sauce. 250gs of butter, melted over a low heat, add plain flour (Gluten free works just as well) add in small amounts and mix to a paste, slowly add milk and stir.

Next put 1/3 of mince in a dish, pour over 1/3 of sauce, layer lasagne sheets (I don't pre soak) and repeat process, using only 2 layers of lasagne.

Put in oven and cook for 30-45 minutes, depending on your oven. 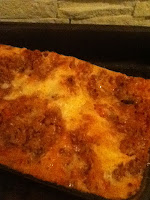 The above recipe has been adapted from various sources, bits handed on from friends and hubby but probably the main idea from Delia Smith.

*I don't add cheese to the lasagne, we eat it with salad and fresh bread.

You'll not find fish curry on this blog, but if it appeals to you or you have a slow cooker, pop over to @mediocre_mum
Posted by chickenruby at 21:32:00